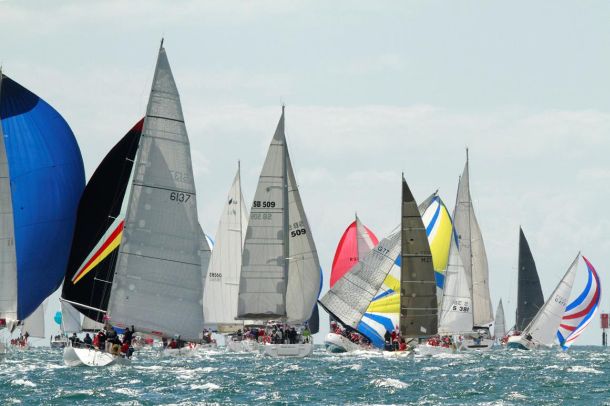 Torquay sailors Brenton and Jen Carnell wasted no time registering for the Festival of Sails 2016 when online entry for the annual Australia Day regatta opened this morning, Monday August 10, 2015. Their current Sydney 38 national champion, Phoenix, is the first published entry.

The couple is super keen to let their one design classmates know they can’t wait for the chance to defend their title when the Morris Finance Sydney 38 Australian Championship plays out as part of the Festival next January, 22 – 26. The class is talking about a likely fleet of 16 Sydney 38s from Victoria, NSW and possibly South Australia.

“It’s an honour to be the first entry for our local Festival of Sails 2016,” Brenton said today. “Given it’s a title year for the Sydney 38s we couldn’t wait to register Phoenix!”

Brenton’s association with the Festival host, Royal Geelong Yacht Club, and the sport is lifelong. He and younger sister Teri Dodds, the well-known sailing and official Festival photographer for the past 12 years, crewed on family boats with their parents from a very young age.

“I’ve been a continuous RGYC member for maybe 45 years and don’t think I’ve missed an Australia Day regatta since I was 10, back in the 1970s,” Brenton recalls. “I’m sure I can rightly remember as a kid smashing into a southerly on my dad’s Firebird in the passage race and hating every minute of it, saying, ‘are we there yet?’”

It’s a very different story looking forward to the 174th edition of Victoria’s oldest sporting event. Brenton is the boat owner and the Sydney 38 Australian title holder, ready to defend the crown on his patch – Geelong’s Corio Bay.

“Hopefully we’ll need to extend the trophy cabinet after the upcoming season,” laughs Jen, referring to last season’s winning streak that included both the Australian and Victorian Sydney 38 titles.

“We will be up against some stiff competition. The level of racing has lifted thanks to the newcomers and existing teams really finding their groove, and dragging the fleet up,” Brenton added. “Everyone is capable of winning a race or two during a regatta but consistently achieving good placings has been our winning ticket. The current fleet of Sydney 38s is very close.”

A second national title, for the VX One one-design sports boat, will fall under the Festival of Sails’ banner.

If a national title or divisional win or place is a pipedream there’s always the major prize of a trip for two to New York valued at $10,000 open to all owners who register an entry before the closing date of Friday January 15, 2016. It’s the biggest prize ever offered by the RGYC and has been generously donated by Geelong Travel.

A bonus incentive for interstate entries is the Bausele watch valued at $1,000, the special prize for one lucky winner who hails from a territory or state beyond Victoria, plus any international entrants.

Pre-Festival, RGYC is ramping up and reaching out like never before, sending sailing manager Rod Hagebols on a national roadshow to speak to other clubs’ members and extend a personal invitation on behalf of the club’s board and Festival organising committee to be part of Australia’s largest annual mixed keelboat regatta.

“The reaction from the Sydney clubs has been really positive and I’m looking forward to similar receptions when I visit the Cruising Yacht Club of South Australia, which fielded a strong state-based team last year, and the Royal Yacht Club of Tasmania in the coming months,” Hagebols said.

“All Rolex Sydney Hobart and Melbourne to Hobart yacht race finishers, particularly those from ports other than Melbourne, are naturally invited to detour to Geelong and be part of the Festival of Sails on their way home.”

The Festival of Sails 2016 presented by Rex Gorell Land Rover will be staged over five days across the Australia Day long weekend. Dates move around year to year to lock into Australia Day. The sports boats will kick off the racing on Friday January 22, followed by the historic Melbourne to Geelong passage race on the Saturday and the remainder of the series racing held across Sunday, Monday and Tuesday morning. The regatta draws to a close on the Australia Day afternoon.

The following year, 2017, marks the 175th running of the Festival of Sails as a Victorian major event and RGYC is already considering ways to commemorate the historic milestone.

All information relating to the Festival of Sails 2015, including the Notice of Race, is on the regatta website http://festivalofsails.com.au/