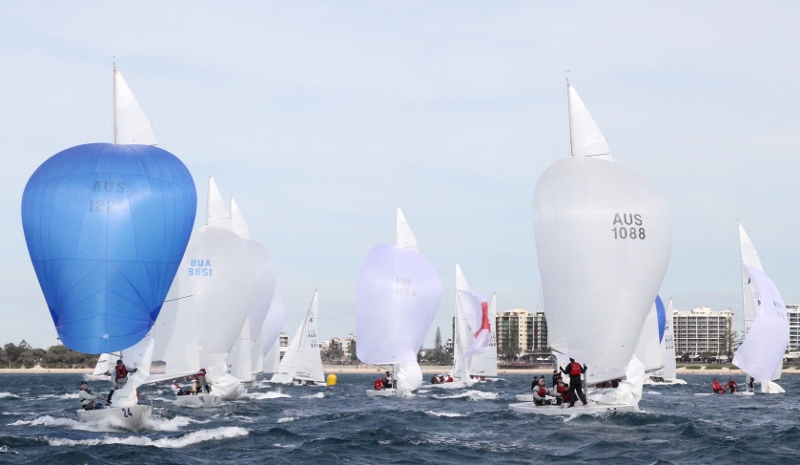 Entries are now being accepted for the 20th anniversary of the Etchells Australasian Championship which will be conducted by Mooloolaba Yacht Club.

Organising committee chair Trevor Martin says he is anticipating an outstanding event as the Etchells sailors start talking about the Mooloolaba regatta and new event supporters join the sponsor family.

“North Sails is the latest company to join our sponsor group. They have been a great supporter of the Australasians from many years, as both competitors and corporate supporters,” Martin said.

North Sails Australia managing director Michael Coxon is usually at the front of the queue when it comes to entering his team in the annual Australasian Championship. This year is a bit different as he waits a little while to organise either to charter a boat or join an existing crew.

“I will be there in some form or other; either sailing my own boat or sailing someone else’s. My current boat is not really of a competitive standard. I would prefer to turn up at the Australasians with a new boat,” says Coxon who has been on the podium three times in the last 19 years, winning the regatta once in 2001.

“Really I am there to service the clients, to help them on and off the water with set-up and tuning advice on rigs and sails. We will also have with us a mobile sail repair service,” he added. In between all this work, Coxon says he will still be out on the water in among the fleet enjoying his Etchells racing.

While he sorts out his boat situation Coxon has set his mind to devising a new approach to how the North Sails mid-fleet prize of a jib, valued at $2,000, is awarded.  “We want to make it more of a lottery when it comes to winning this prize,” Coxon said.

The initial plan is to draw three boat numbers out at the end of each heat based on the results with no one boat number allowed to be drawn twice. “I am trying to support those that come to the regatta but wouldn’t normally win something,” Coxon said.

The North Sails prize will be awarded at the final prizegiving where Coxon says the winner needs to be in attendance to accept the prize. “The winner can choose the jib model that best suits their inventory and I will pay the freight to send it to wherever they are located,” he added.

On the water Coxon and Etchells world champion skipper Tom King are continuing to work together. “North Sails are in a very good position. We took out the top 10 places at the world championships in Hong Kong and then backed that up with a win at the Australian championship.

“Even though we have an incredibly solid base we are always thinking outside the square,” Coxon said.

The Notice of Race and online entry for the 20th Etchells Australasians is on www.moolooletchells.com.