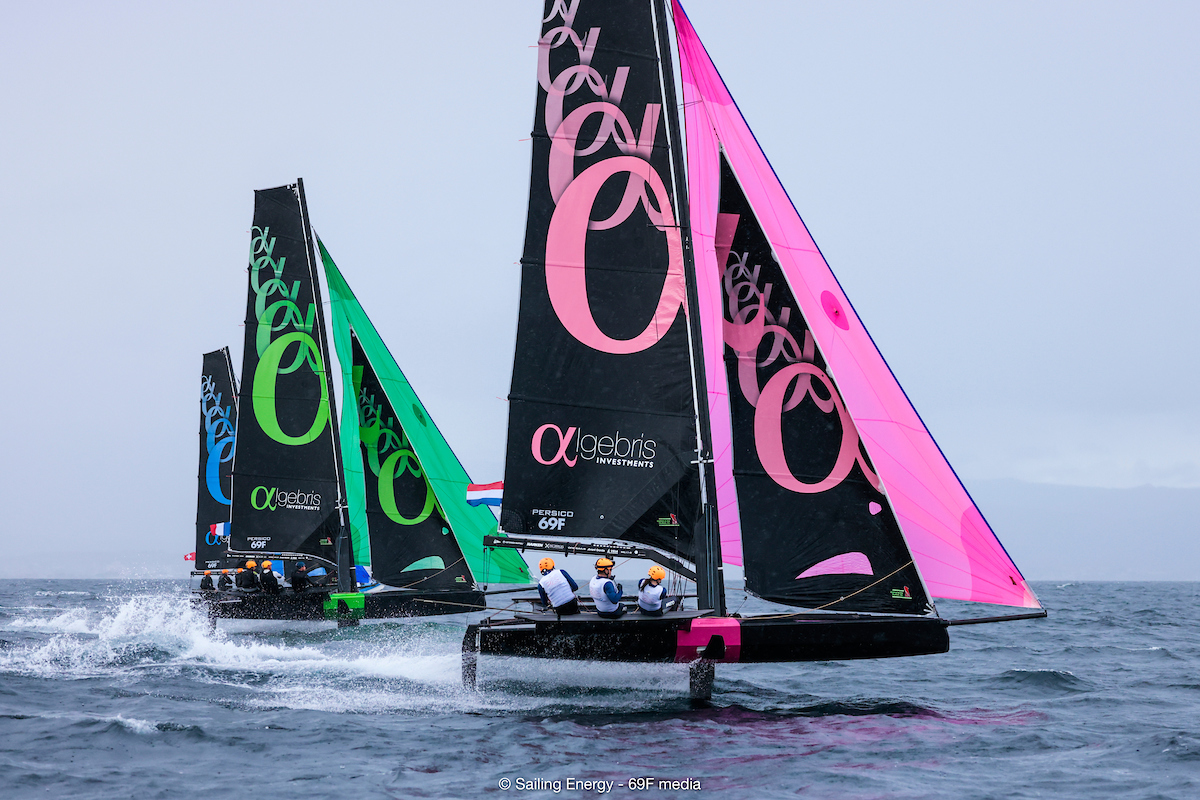 Winds reached up to 12 knots on the final day of the event. Pic - Sailing Energy / 69F media

The Grand Final of the Youth Foiling Gold Cup (YFGC), an event which saw the top six teams of the 2021 season competing to win the title of under-25 champion, concluded today with the victory of DutchSail – Janssen De Jong.

Today’s three closing races, held on an L-shaped course with a reaching start, were decisive due to the multiplier applied to award double points for the second race, and quadruple points for the third and final race.

The Dutch team triumphed after winning seven out of the nine races over the three days of the regatta. Throughout the regatta, the Gulf of Cagliari offered everything from blustering wind and rough seas to light and unstable breezes.

The DutchSail team, with Cas van Dongen at the helm, Scipio Houtman on the mainsail, Ismene Usman and Merle Louwinger as flight controllers, coached by Pieter Jan Postma – a veteran of two Olympic campaigns – dominated once again in today’s three races, winning each with a comfortable lead over the rest of the fleet.

Despite the French crew clinching a second-place finish in the last race of the day, held in a south-westerly breeze of 12 knots, the clash between Team France and Youth Team Argentina was won by the Argentinians. The Argentinian crew made their debut on the Persico 69F at the Cagliari event. Their incredible progress over the course of the competition culminated in a second-place finish in the overall rankings, despite the presence of much more established teams.

Dante Cittadini from Youth Team Argentina said, “We are very happy with this second place that we did not expect at first. We arrived here in Cagliari at the last minute. We did everything in a rush, looking for the best configuration on board during the warm-up days. In the ACT 3 races, we learned and made a lot of progress. We came into the Grand Final with an open mind, well aware that we had nothing to lose and knowing that we were going up against the best teams on the circuit. We did a terrific thing and really enjoyed ourselves.”

The final podium of the Youth Foiling Gold Cup has DutchSail in the top spot on 54 points, the debutante Youth Team Argentina in second place on 37 points, and Team France in third place with 33 points.

The winners of the circuit were awarded a voucher worth €50,000 and a wild card entry to the 69F event taking place in Palermo from November 12th to 14th and reserved for international sailing professionals. Second-classified Youth Team Argentina received a voucher worth €30,000 while the French team, in third place, claimed a voucher worth €15,000.

The 69F calendar continues next week with the 69F Pro Cup, which will conclude a rich and intense 2021 sporting season. The Youth Foiling Gold Cup will start again next year with ACT 1 scheduled for Miami from February 4-10.

Cas van Dongen from DutchSail – Janssen de Jong said, “Our goal was to take advantage at the start, sail fast and not take any risks. We did a great job and it’s not easy when you have some pressure on you, especially with this new scoring format. We still managed to keep our focus. It was a life lesson for us. we learned how to handle the pressure.  I am very proud of the team and what we achieved, I will never forget this day.

“We qualified for the 69F Pro Cup in Palermo and it is an honour and a great privilege to race with these champions. It will be a great challenge.”