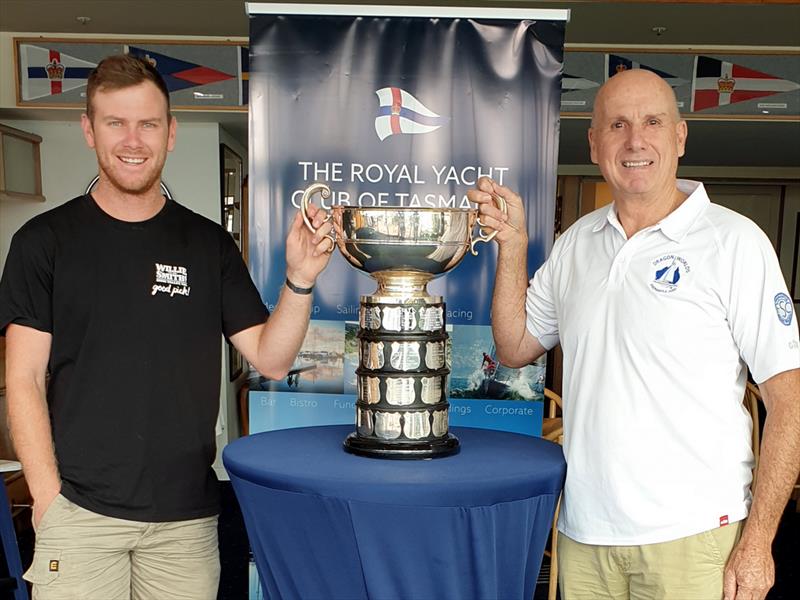 The Royal Yacht Club of Tasmania has received a challenge from the Royal Sydney Yacht Squadron for the coveted Sayonara Cup, renewing the match-racing contest between two of the nation's senior clubs after a break of a decade.

The RSYS has already named its challenging yacht and team; Whimsical and skipper Matt Whitnall, the RYCT's Defender Trials will be held this coming Saturday (23 February 2019) with a best-of-seven match races between prominent RYCT members Nick Rogers and Elliott Noye.

The Defender Trials and the Challenge Match, on 16-17 March 2019, will be sailed in International Dragon class yachts. The Deed of Gift of the Sayonara Cup does not restrict the event to one particular class but it has been sailed in the Dragon for the past 30 years.

Rogers won the Sayonara Cup from the Royal Sydney Yacht Squadron in 2009 and is a veteran of the Dragon class, winning the Prince Philip Cup 11 times as well as a World championship and this year winning the Masters and Corinthian trophies at the Worlds in Perth.

His crew of Karabos IX on Saturday will be Leigh Behrens and Simon Burrows.
Noye, the 2019 Tasmanian champion in the SB20 class, is a relative newcomer to Dragons. He is sailing Ridgeway with his crew, Ed Snowball and Ollie Nicholas.

Whitnall is an active Etchells sailor out of the Squadron, Chapman a former Hardy Cup winner and international sailor in varied classes, notably as a tactician. Giles has sailed for many years with Ingate on his International Dragon, Whimsical.

The Sayonara Cup was the premier trophy for Australian yachting from 1903 to 1962. Modelled on the America's Cup Deed of Gift, it was established as a match-racing event between large yachts representing New South Wales and Victoria.

The perpetual trophy was named after the winner (from Melbourne) of the first challenge match between the Royal Yacht Club of Victoria and the Royal Sydney Yacht Squadron.

Despite periods when no events took place, the Sayonara Cup remained well-known to the general public and the experience gained by Australian yachtsmen racing for the trophy led them to consider challenging for the America's Cup in the late 1950s when the New York Yacht Club adopted the International Twelve Metre Class.

The Sayonara Cup was then sailed in the slightly smaller International Eight Metre Class yachts, with the event expanded to include challenges from Tasmania as well as NSW and Victoria, with the RYCT's challenger Erica J bringing the trophy to Tasmania for the first time.

Colourful Sydney yachtsman Bill Northam introduced new competition when he imported from England what was reputed to be the world's fastest Eight Metre, the Fife designed Saskia. For the first time in 24 years the Sayonara Cup returned to the RSYS.

With Australian yachtsmen focusing on the America's Cup challenges in Twelve-Metres, the Sayonara Cup became dormant until the 1980s when it was contested in the one-design International Dragons. Victorian, NSW and Tasmanian boats have all taken part at different times.

In 1993, the RSYS challenger won, but the RYCT regained the trophy the following year in 1995. In 1996, the Sayonara Cup returned to Sydney but this time to the Royal Prince Edward Yacht Club, which then defended in 1997, 2000 and 2004 before the Royal Yacht Club of Tasmania's Nick Rogers won again in 2009.

Rogers' winning crew in 2009, Leigh Behrens and Simon Burrows are back aboard Karabos IX for this Saturday's Defender Trials on the River Derwent.