Today, 13th October 2014, Sir Keith Mills and four-time Olympic gold medallist Sir Ben Ainslie launched the 1851 Trust, which aims to inspire and engage a new generation through sailing and the marine industry, providing young people with the education, skills and training to become innovators of the future and stewards of the marine environment.

The Duchess of Cambridge will be Royal Patron of the new charity.

Her Royal Highness said: “I am delighted to be Royal Patron of the 1851 Trust.  I feel very fortunate to have enjoyed sailing from a young age and I know it is a great way of providing young people with the opportunity to develop skills and confidence.  It is a hugely exciting time for sailing as the British Challenger bids to bring the America’s Cup back to Britain. I am looking forward to being part of this journey and I hope that through the 1851 Trust we can engage and inspire a new generation into sailing along the way.”

The Trust will be supported by Ben Ainslie Racing, and the team will host a Visitor Centre for the Trust at the team’s Portsmouth headquarters, opening in June 2015. It will be an interactive showcase for the sport, sustainability and innovation. Sir Ben Ainslie will also be a Patron of the 1851 Trust, and he commented, “We’re really excited about what the Trust can do; we are dependent on the oceans, and the marine industry needs to become a leader in environmental stewardship, and in finding solutions. Young people are the key, there are great opportunities in the marine industry, and we want to open those opportunities up to as many people as possible – the more talent you have working on a problem, the better the solutions will be.”

Earlier, the Trustees had joined Sir Ben Ainslie to visit an art project at the construction site of Ben Ainslie Racing’s new headquarters. The project links the communities of Portsmouth and the Isle of Wight through the Solent waters that join them. Seventy two young people from six local schools (St Judes Church of England School, Park Community School, Admiral Lord Nelson School, Charter Academy, Ryde School, Ryde Academy) were invited to complete a mural begun by local street artists James Waterfield, Dharma 77  and My Dog Sighs. The painting – coordinated by local arts company Strong Island – depicts the skyline from Portsmouth to Ryde, Isle of Wight, with the students filling the Solent waters with images of its rich maritime history. It is a history that Ben Ainslie Racing will continue from their headquarters in Portsmouth. 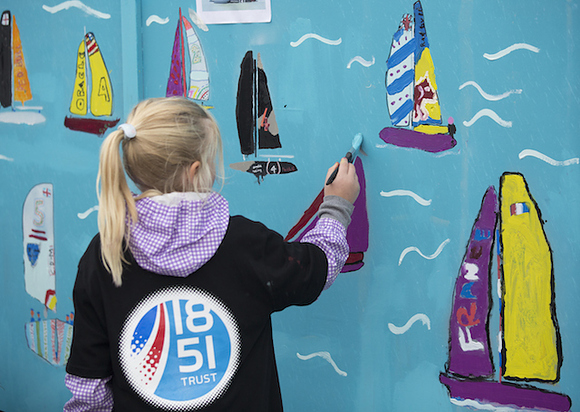 Some of the famous craft painted by the young people include the Mary Rose, a successful Tudor warship that sank fighting the French during the Battle of the Solent, salvaged and now displayed in the city. Flying boats and hovercraft were both built and developed on the Isle of Wight, and the latter still carries people between Portsmouth and Ryde. A previous British challenger for the America’s Cup features in the mural; Sir Thomas Sopwith’s Endeavour, built in Gosport and launched into Portsmouth harbour in 1934. And of course, the yacht America sails proudly round the Isle of Wight from the Royal Yacht Squadron, winning what later became known as the America’s Cup, named in her honour. Ben Ainslie Racing’s new boat will also be featured.

1851 was the year of the Great Exhibition, a celebration of modern industrial science, technology and design and championed by Prince Albert. It was an opportunity for countries to showcase the best of their achievements. A syndicate of businessmen from the United States brought the schooner called America to demonstrate their shipbuilding skills. America outclassed the British racing fleet of 1851, and began the challenge that Ben Ainslie Racing have now embraced – to bring the Cup home. 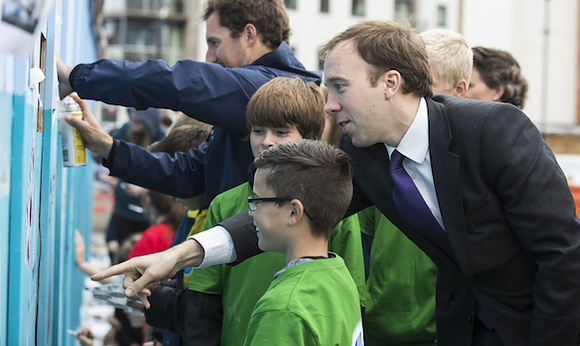 The Trust will have four pillars to its activity, and will work with other charities to deliver its goals.

Inspire – a new generation into sailing, breaking down barriers to participation and creating an opportunity for young people of diverse backgrounds to take up the sport in their communities.

Engage – sailing isn’t just about boats; science, technology and engineering opportunities can engage young people in a great marine industry career that can lead to travelling the globe and even working for an America’s Cup team.

Educate – offer skills and qualifications for young people, and create pathways into apprenticeships, skills based training, and jobs in the wider sports and maritime industry.

Innovate – support innovation for the future to promote sustainable scientific technological advancements in sailing and the maritime industry, and safeguard our marine environment. 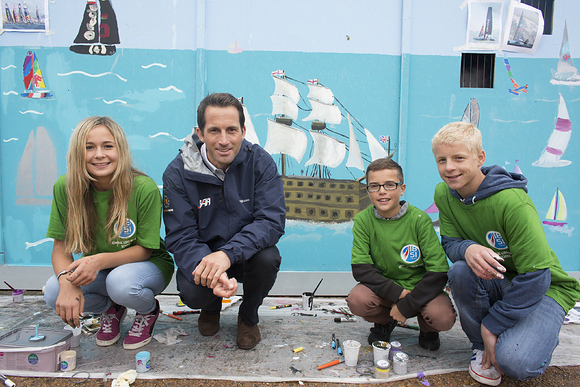 Sir Keith Mills GBE will Chair the 1851 Trust, and commented; “We’ve got together a great team of Trustees and they bring knowledge, experience and important contacts in all the areas that the Trust will operate. We are already advertising for a CEO, and we’re looking forward to starting work.”