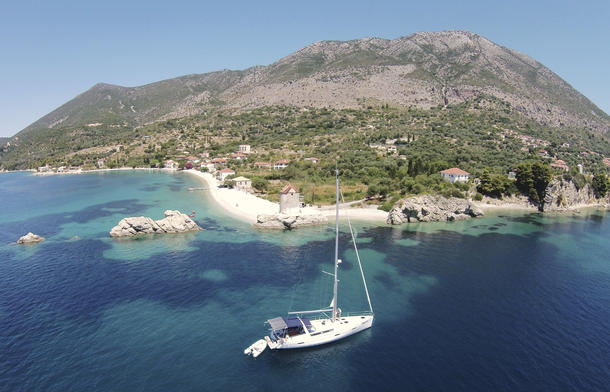 We all want better photographs of our boat and the beautiful places that we visit, but we are normally restricted to sea level unless we can find a convenient hill to climb.

Recently, small camera drones have become affordable. They take beautiful pictures, allowing us to compose our shots in a three dimensional space. Drone photography is great fun, challenging and very satisfying when you get it right. This article shares my experiences with flying a drone at sea.

Camara drones are an interesting combination of flying skills, technology and photography. The control systems are very complex, but improving rapidly every year to make them easier to fly.

You do not fly the drone, it flies itself and you simply tell it where to go. But this does add some confusion as to who is actually in control. It is quite a challenge to get your flying skills to the stage where you can concentrate on taking good photos and have reasonable confidence of getting your expensive toy back intact.

There are regulations for the operation of these drones, in Australia the rules are common sense: no flying over people or private land; not over 150 metres altitude; not close to airports. In some countries the drone needs to be registered. My personal rule is to avoid annoying anybody and I have never had any problems.

Until I went to Tunis.

We sailed to Tunis on our way from Barcelona to Greece. It is a convenient and interesting destination between Sardinia and Sicily.

We decided to aim for Sidi Bou Said Marina, which is about ten miles north of Tunis city. Sid Bou Said looks like a Greek village with blue-and-white houses nestling on top of the hill, quite close to the old ruins of Carthage.

We were warned that the marina had a shallow entrance, but we were surprised on arrival to see people walking across the marina entrance. All waving helpfully to us.

We had several attempts to get in and failed, despite the conflicting instructions of the onlookers. So we anchored out, surveyed in the dinghy and eventually bounced our way through the angled channel into the marina.

We really enjoyed Tunis, the people were delightfully friendly and helpful and we were surrounded by ancient Roman and Carthage history. We were there a couple of months after the killings in the Bardo museum, which still showed bullet holes in the marble walls and glass displays. Tragically, the senseless attack at the resort in Sousse happened a few weeks after we left, which has seriously affected Tunisia’s tourist trade.

While enjoying our stay in the marina I was worried about getting out. The solution came to me while having lunch at the beautiful restaurant on the hill overlooking the marina where the shallow bar across the marina was clearly visible. I realised I could fly my camera drone to take aerial pictures of the shallows.

So that afternoon I unpacked the drone, casually walked past the coast guard and police boats and flew over the harbour entrance taking excellent pictures of the marina entrance. When I landed, one of the coast guard men came up to me, looked at the drone and I showed him the pictures we had taken.

He seemed unconcerned to start with but, after discussions with his superiors, the situation became more complicated. Myself and Peter were instructed to follow them to the police station in the marina.

Then we had an extraordinary few hours in the police station, which slowly filled up as more and more senior officials arrived: the military, the police, immigration, customs, coastguard and possibly the presidential guard as we had been flying within view of his palace.

Nobody had ever seen a small drone before and were very interested in what it could do. Everyone was very polite and welcoming to us as tourists and understood the reason for our flight. But we had started a complicated process, which needed to be pursued to the end.

For all the problems we caused, the photo of the marina mouth was invaluable. We saw how to make the sharp turn around the sand-bank and managed to navigate out without incident.

Training and flying over the sea

Your camera drone will give you the opportunity to take superb photographs, but you need to be careful that you do not join many people that have crashed, drowned or lost their precious toy. The secret to successful camera drone flying is hours of training and technical study.

To get started I bought a small indoor drone for about $100, which is an ideal way to build up my hand-eye coordination without any damage. I bought a Blade Nano QX, which has similar flying characteristics as the big ones.

Be careful to buy the same radio control mode as the big camera drones, mode 2 (throttle on left), rather than mode 1 which is popular in Australia.

Once I could fly my little toy reliably, I felt confident enough to pay the $1500 for the Phantom 2 quadcopter. The DJI Phantoms' have a very good reputation, but also quite expensive. The latest models are easier to fly, have a superb camera and collision avoidance.

All my first flying was at the park, building up my skills in reasonable safety. It was quite scary the first day that I flew at the beach and watched my beautiful toy flying uncertainly over the water. My first photos were not that good, because I was concentrating too much on the flying and not on the composition of the photo.

Flying from the boat

Before flying from the boat I went back to the park and did practice flights from an imaginary yacht. I took off from the bow, avoiding the imaginary lifelines and forestay and then flew circuits taking the photos and landing again.

Many practice sessions at the park made me much more confident for the real flight over the water.

Flying from your boat introduces complications, apart from the difficulties of a small platform and the ultimate penalty
of a crash into the water. Your takeoff and landing points are no longer static. Camera drones all have GPS which provides a 'home’ feature so they return to the take-off position when requested, or with a low battery or lost communications.

If the ‘home’ function is activated at sea, the drone will return to the take-off position and do a gentle but inevitable splash-down landing because you will have moved from that GPS point.

Some controllers give you the option to set ‘home’ to your current position rather than the take-off point.

You need to know how to set the home position and how to take control when getting close to the landing to avoid the boat’s obstacles.

The GPS is a great asset for easy controllability, which means that if you take your hands off the controller the drone will just hover in midair. This also works on take-off so it just rises vertically, but if you take off from your boat while it is still moving the drone will appear to fly backwards into the nearest obstacle.

You can fix this by flying in non-GPS mode, but this is more difficult and allows the drone to be drifted by the wind. My solution is to stop the boat completely before take-off, and again before landing.

I have watched many drone crashes on Youtube and most are avoidable by taking more care. Trees are a common culprit, which is one advantage of flying at sea.

Treat your camera drone with respect, do plenty of training and study of the technical features and you will have a very rewarding and enjoyable hobby.

You will take some of the best photographs of your life.