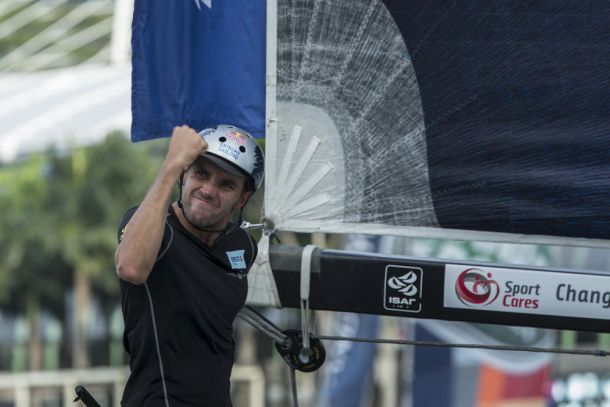 Double Olympic gold medallists Roman Hagara and Hans Peter Steinacher and their team on Red Bull Sailing Team have won the opening Act of the 2015 Extreme Sailing Series, soaking up the pressure of expectation in front of the crowds in Singapore to become kings of Marina Bay after 32 hard fought races.

“We are all thrilled, it’s great. The young guys did a great job and I think all of our experience was very helpful; together as a team we kept everything together and it was perfect for us,” commented Hagara, who together with tactician Hans Peter Steinacher selected Red Bull Youth America’s Cup sailors Jason Waterhouse, Shaun Mason and Stewart Dodson to join them this season. “This win showed us that we can do it. We didn’t have as much luck in the last season but here everything went well for us. I think we now are making good decisions on the racecourse.”

Waterhouse, 23, from Australia, was also recognised for the impact he has made on the racecourse, receiving the first Above and Beyond Award of the year, from Land Rover Asia Pacific Managing Director, Russell Anderson.

Race Director, Phil Lawrence explained the Committee’s decision. “Rarely do we see a new helm explode out of the starting blocks as Justin Waterhouse has demonstrated in Singapore. He’s one of the youngest sailors on the circuit, and the consistent performance he has put in here, posting a podium finish in half of the races over the four days of combat, is impressive. The other teams are going to be keeping a close eye on him over the coming season.”

Hagara was understandably proud of the new blood onboard his Extreme 40. “From the first moment we met Stewart Dodson, Shaun Mason and Jason Waterhouse we were impressed by not only their raw sailing talent, but also their drive, determination and dedication to be making a career in the highly competitive world of pro sailing. The mixture of Hans Peter [Steinacher]’s and my experience and long term knowledge of competing at the top of the sport, plus the powerhouse these young guns bring to the boat, it could be one of the most successful stories in professional sailing this year.”

SAP Extreme Sailing Team were on a mission, nailing confidence boosting early races that made the Austrians earn every point, to take a deserved second place – their best ever finish. “It’s such a great job by the team and we are so happy with the second place, its been a long time since the podium and this one feels so good,” commented co-skipper Rasmus Køstner. “This regatta has been a long event under very shifty conditions; we have tried to improve throughout and have managed to get the most out of the challenging conditions. We definitely feel like we are doing a lot of things right at the moment and hope to be able to continue that.”

Leigh McMillan and his team from Oman are famous for their final day comebacks, but the Danes and Austrians were not going to be muscled out, leaving the twice-Series champions in third place. McMillan commented: “We went out fighting, but went into the last race with a bit too much to do, and didn’t get the strategy right from the start. We’re a little disappointed to finish third but we can’t take anything away from Red Bull Sailing Team and SAP Extreme Sailing Team. It goes to show there’s a lot of talent out there. We’re still going to fight all the way through the season, and we know we’re going to have our turn.”

Skyscrapers of steel and glass dominated the compact Marina Bay track and the huge crowds got up close and personal to the action from the public Race Village that saw thousands of people pass through its gates over the weekend. The final day’s racing saw the nine top international teams battle it out in superb conditions of 15 knots with gusts up to 21, that gave the spectators on shore the spectacle they came for.

Gazprom Team Russia, this season with three Russian sailors onboard including skipper Igor Lisovenko, showed they are a real contender, sailing consistently to finish the Act in fourth place, just seven points behind The Wave, Muscat. The second team from the Omani stable, Oman Air, took the final race, to finish their debut regatta under skipper Stevie Morrison in fifth place, with the Australian crew on GAC Pindar who have been making quiet progress all week, finishing in sixth, despite sitting out four races on day two with a damaged bowsprit.

Beko Team Turx and Lino Sonego Team Italia may be the new teams on the block but they showed no intention of being bullied out on the track, with both taking their share of race wins over the regatta, as did the local entry Team Aberdeen, supported by Host Venue Partner Aberdeen Asset Management.

The last word went to Team Aberdeen skipper Nick Moloney, a man who knows the Series better than most. “It’s always a pleasure to compete in this fleet – it is an elite group. Stevie (Morrison) was fantastic this weekend, and there’s a lot of new additions to the fleet which is really exciting. The Extreme Sailing Series is always the place to be. There’s a whole lot going on in the sailing world across the board but they don’t compare. It’s an absolute pleasure to be here.”