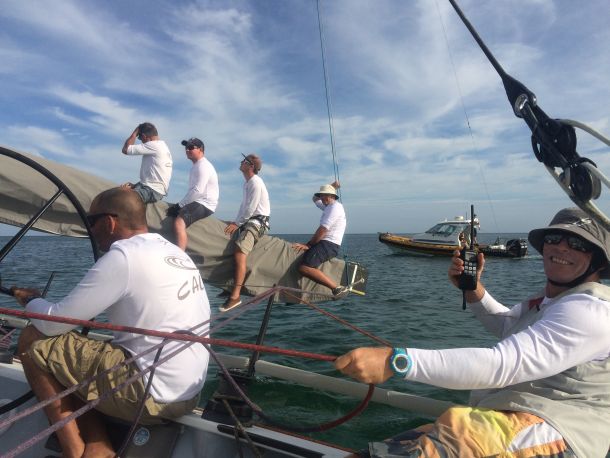 The first attempt to run a morning race in this year’s Geographe Bay Race Week did not start well. A low tide left the TP52 Calm hard aground near the marina entrance. It took four big men at the end of the boom and a halyard attached to an inflatable chase boat with two 250hp motors on the back to finally drag the big boat into deep water.

Once all yachts arrived at their respective start lines (passage races and windward/leeward races are started in separate areas) races started well, but as the morning wore on the breeze lightened off until by midday, it was non-existent.

Tailenders in Division 1’s second race were badly disadvantaged as the breeze died while they were on their final leg, leaving them to sail painfully slowly to the line knowing that those in front of them had already finished in reasonable breeze. On the passage race courses, the action simply stopped for some time until the sea breeze wafted over the Bay an hours or so later.

Craig and Janette Hansen’s magnificent Buizen 52 Napea dealt with the crisis better than most. Fully air conditioned, the crew was very comfortable while fellow competitors sweltered, and to add to their comfort, they cooked up a lamb roast and baked a loaf of fresh bread in the yacht’s breadmaker. This is racing at its finest!

Division 1 eventually completed three races, with Dave Walling’s The Next Factor winning two of them and Calm taking the third. Attention is starting to turn to the points table, where Black Betty heads the table from Calm, but the scores are awfully tight at this, the mid-point of the regatta.

Progress points in both sides of the Division 2 fleet are very close. On IRC, Just Cruisin’, Addams Family and Lithium are separated by a mere point, while under performance handicap, Lithium, Just Cruisin, By and Large and Deckchairs Overboard are also split by a point.

Conrad Todd took out Division 3 line honours in Stand Aside, but the handicap win went to the well-travelled S&S34 Huckleberry. Don Brooker’s Sense 50 Dorade added another fastest time to his tally in the Jib and Main fleet but first place went to French Kiss, followed by Fortuosity.

Wednesday is a lay day and racing resumes on Thursday.