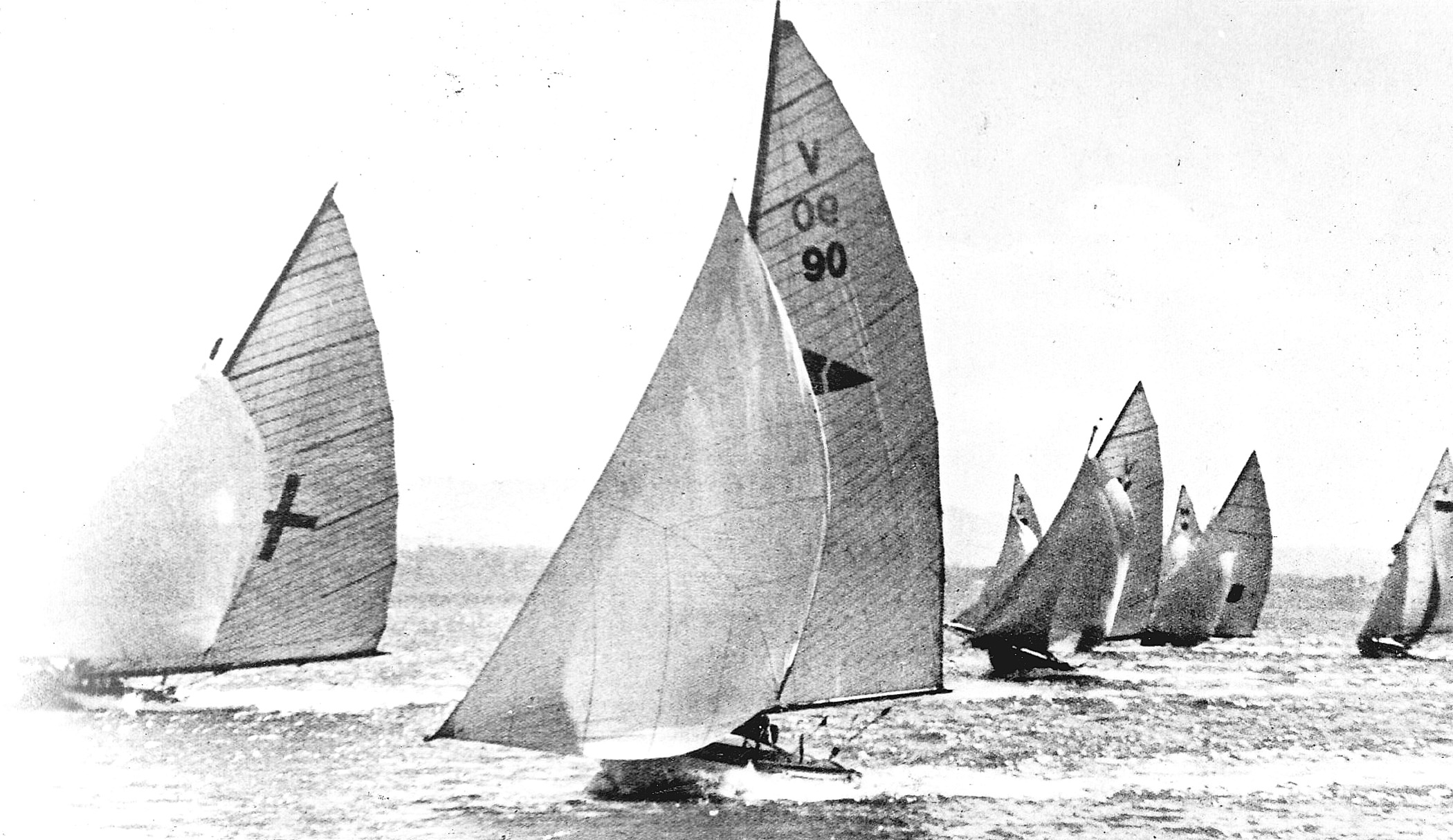 Australia's St George and NZ's Jeanette vying for the lead in Race 2 of the 1939 World Championship.

Two Australian skippers from the earlier years of 18 footer World Championships, were totally unimpressed at actions which they each believed deserved very strong reactions.

The first in 1939, involved the defending champion Bert Swinbourne and his Taree skiff.  The second, 25 years later in 1963, was Ken Beashel and his Schemer skiff.

In 1939, Swinbourne led a three-boat Australian team to contest the world Championship in Auckland against a large group of M-class and V-class boats.

After a last-minute charge for the lead in the opening race of the three-race regatta, New Zealand’s Manu grabbed the lead to defeat another NZ boat, Jeanette, by just eight seconds.

Australia’s St George and NZ’s Jeanette then led for most of the second race before Jeanette took the lead at the last mark and went on to victory from St George and Taree.  First race winner, Manu finished four minutes back in seventh place.

Following the race, a protest lodged against Jeanette, for a breach at the first mark, saw the boat disqualified.  It was the first of many protests that would ultimately mar the championship for many years to come.

The final race drew enormous spectator support for the local teams but it was the 1938 champion Taree that led from the start and crossed the finish line nearly two minutes ahead of Jeanette and Manu.

It appeared that Taree’s skipper, Bert Swinbourne had won his second title, but a late protest by a NZ skipper for a breach by Taree prior to the start, was upheld and the championship was awarded to Gordon Chamberlin’s Manu.

When the protest was upheld and Taree disqualified, the recalculated points gave the championship to Chamberlin and Manu while Swinbourne was relegated to fourth overall.

Swinbourne appealed the decision but there was no time to hear his appeal so Swinbourne and the Australian team, together with the trophy, returned to Sydney.

Five months after the regatta, the League received a letter from the Australian Board of Control advising that the Auckland decision had been upheld and Manu was confirmed as the winner.  The League then agreed to send the trophy to New Zealand for presentation.

Swinbourne refused to accept the result, because his appeal was with the New Zealand authorities and would not hand over the trophy “until it is properly won” and remained in his possession for several years.

Finally, in 1945, Swinbourne returned the trophy back to the League and explained that Taree’s owner Bill Scahill had told him to hang onto the trophy if his appeal wasn’t heard, and “that’s just what I did.”

He claimed: “There was no glamour about holding it.  It went straight into the pantry (under the kitchen sink) without even the New Zealand wrappings being removed.”  The League accepted Swinbourne’s apology, and sent the trophy to Auckland for an official presentation to Gordon Chamberlin.

In 1963, unlike the protracted 1939 incident, it involved instant retribution by Ken Beashel on the high seas.

Ken Beashel, later recalled, “We were sailing towards the finish with a reasonable lead when we had to tack.  This boat, which was actually a small ship, came steaming up, taking photos of us, so I yelled at him to stop but the next thing he was aboard us.”

Beashel managed to climb aboard the launch to exact some retribution from the coxswain, as any self-respecting 18 footer skipper would.  As the two boats were drifting apart, Ken only had time for a short, but effective, visit before jumping back in the tide to re-join his boat and crew.

“I managed to climb up the stem and got on board and told him what I thought about him with my hands (I grabbed him and thumped him) then jumped back into the water to check my damaged boat.”

“It created an international incident but the Australian Government’s External Affairs Minister told me not to apologise.”

There was a happy ending for Ken Beashel and his Schemer crew.  They won the 1963 world Championship with three wins and a second placing over the five races, but the record would have been even greater.

Spectators can follow the racing on board the spectator ferry. Booking online through the club’s website is essential: http://www.18footers.com.au/18-footers-sailing/spectator-ferry/