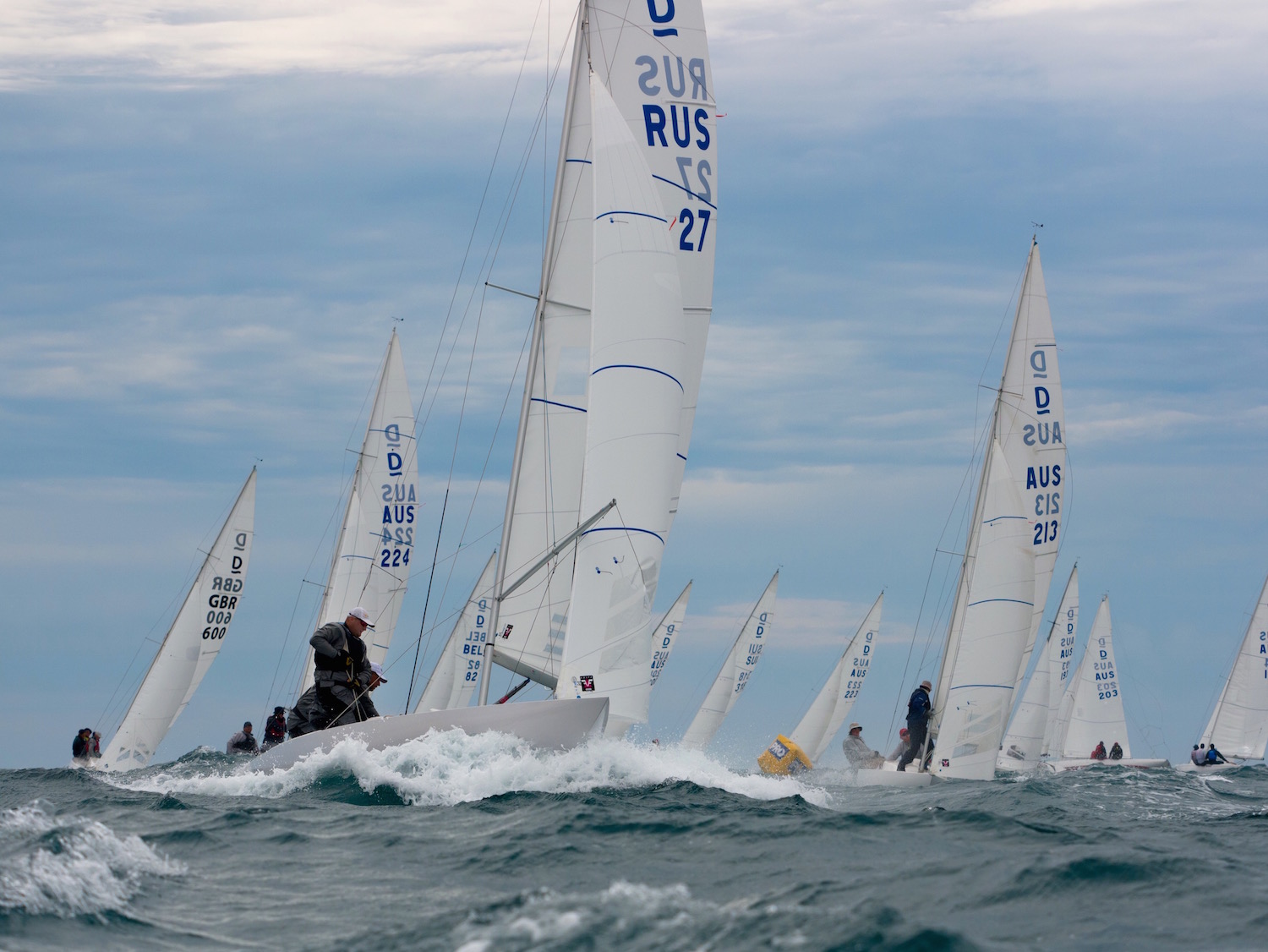 At the start of the penultimate day of the 2019 Dragon World Championship in Fremantle, the top six boats were separated by 6 points. After two more races today the current world champions, Provezza sit just 3 points ahead of Louise Racing with Fever one point adrift in third.

The first race of the day was scheduled for 1200 noon but the afternoon sea breeze was a bit slow to materialise to its full potential. The highly experienced PRO John ‘JT’ Taylor knows the waters in this part of the world better than anyone so he patiently waited for the breeze to establish. Under a slightly eery skyline with a lot of ‘Alto Cirrus’ clouds signifying a front was due, racing got going on the second attempt under black flag.

A two lap windward/leeward course was set on an axis of 215 degrees. Peter Gilmour’s Yanmar Racing got an absolute corker of a start towards the committee boat end with the majority of the favourites spread along the line. The temperamental breeze pulsated between 16 – 18 knots with the odd gust of 20kts.

The majority of the fleet punched up the coast on starboard tack as has become the norm. All 33 Dragons completed the first lap and the order on lap 1 resembled the overall standings with TUR1212, Provezza racing steered by Andy Beadsworth in the lead followed closely by Grand Gordon in Louise Racing and Klaus Diederichs in Fever. The leaders gybe set at the spreader mark and the fleet split evenly on both gybes. (A job well done Mr Race Officer!).

At the gate however Grant Gordon and his team, Ruairidh Scott, Sophie Weguelin and James Williamson rolled down the run to overtake the Turkish team to turn in the lead at the gates. Klaus Diederichs and his crew, Jamie Lea and Diego Negri kept a lid on third.

Heartache for local Western Australian Dragon sailing fans as disaster struck again for Willy Packer forcing his retirement from competition and an early bath. A couple of other retirements followed as the wind started to gust up to 20+ knots in the gusts.

On the second lap the flying Scotsman came steaming down the second run to hold off the defending champions, Provezza and even up the overall points scores. The British flagged Fever steered by Klaus Diederichs crossed in his customary third place. Fourth to finish was another excellent effort by the Dutch girls Charlotte and Juliette ten Wolde, Janka Holan and Pedro Andrade in Olinghi.

A quick relocation and race 9 got started at 1525hrs with gusts in the low 20’s (knots). This time the two lead boats had split opinions, TUR1212 went for the pin whilst GBR820 stumped for the committee boat. However it was not to be for Pieter Heerema from the Netherlands as he was clearly OCS on a U flag and was forced to go home early. Also drama for RUS76, Dmitry Samokhin as he suffered forestay issues leaving him heading for port.

These were soon followed by AUS216, Liquidity Richard Franklin and AUS144 Hotspur, Ethan Prieto-Low and HKG1 with Marc Castagnet all with technical issues. AUS191 Relentless however lived up to her name, David Lynn returning to port for a spare spinnaker pole to come back out to join race 9.

A slightly depleted fleet surfed down the run on in race 9 with a familiar line-up. TUR1212, with Andy Beadsworth on the helm, Ali Tezdiker in the middle and Simon ‘Stir’ Fry, up front calling the shots surged to a comfortable lead over Grant Gordon’s Louise Racing and Klaus Diederichs in Fever in her customary third spot.

At the gate the Turks turned first but Peter Gilmour and crew Sam Gilmour and Yasuhiro Yaji and his Japanese team had chased down Fever to claim second spot in a tight rounding. As gusts of 22 knots hit the fleet there were a couple of swimmers on lap 2. Local RFBYC sailor Johnny ‘Hubba’ Hay went for a water ski behind Saphira and there was an acrobatic case of pole dancing onboard Olinghi as Janka Holan on the bow refused to let go of the spinnaker pole as the boat death rolled from one gybe to another. Just as she appeared out of the water for a breath of oxygen, master tactician Pedro Andrade called for the gybe! Remarkably the whole saga did not cost them any places and earned them the coveted ‘SODA’ award for their efforts. The Sprit of Dragons Awards or ‘SODA’ winners are given a 13 year old bottle of the finest Glenfidditch Scottish Whiskey for their antics.

Andy Beadsworth covered his chief opponents to cross the finish line for his third gun of the championship and put himself in the box seat to defend his title although his crew Simon Fry is still cautious.

Simon: “It's tight, box position is a little generous, we coughed up a point in the first race but the second race we sailed pretty well. If you had asked me at the beginning of the week ‘You can go into the last race with a lead of 3 points would I be satisfied? The answer is yes. It’s a tight championship there are 6 – 7 boats that could have won and maybe its now down to four, it’s going to be good.”

Klaus Diederichs just managed to push his nose across the finish line in front of Yanmar Racing to gain a handy point going into the final day of racing. Grant Gordon slipped to fourth leaving his Louise Racing team trailing Provezza by 3 points with one final race remaining. Anatoly Loginov, Vadim Stratsenko and Alexander Shalagin finished 6th to keep them in the mix on the final day.

Some special performances today include Matthew Whitnall from Sydney sailing Akula with WA Dragon Class President, Steven Cole and Christian Brook as crew. They sailed a blinder finishing 8th and 7th, clearly their best performances of the regatta.

Matthew explains: “Everything that coach Ron Rosenberg said at the Q&A training session yesterday we put into practice today and that was the big difference. We only did the last two races of the PPC, we haven’t sailed with Steven (the owner) but we have sailed Dragons a fair bit. We have been tinkering with the rig and we knew there were a few extra gears in the boat and today we found them.”

Also a great day for the Belgians, Xavier and Anne Vanneste and Karl Odent with two 10th places and local RFBYC sailor Geoff Totterdell sailing Shapes, who scored her best result to date 12th in race 9.

Going in to the final day of racing only one race remains to decide the title. The top three boats are still only 4 points apart and any slip ups could be fatal. The final race is scheduled for an earliest warning signal at 1100hrs.