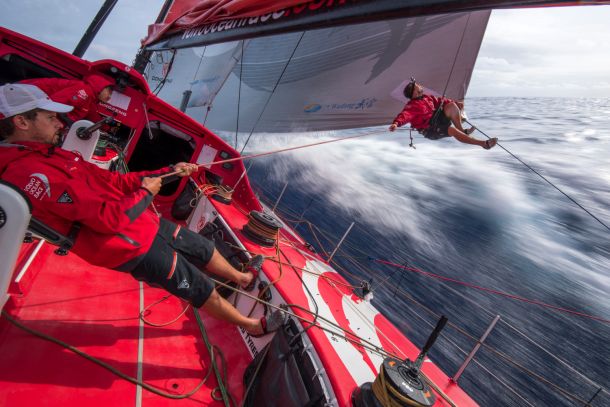 AUCKLAND, New Zealand, February 26 – Victory in the fourth leg of the Volvo Ocean Race was so close that Dongfeng Race Team skipper Charles Caudrelier (FRA) could almost taste it on Thursday, but with just over 500 nautical miles (nm) to go, he was taking nothing for granted.

The fleet is expected to arrive at their destination, Auckland, on New Zealand’s North Island, on Saturday afternoon local time after 20 days of head-to-head racing.

Rarely in the 41-year history of offshore racing’s most prestigious event can such a long leg (5,264nm) have been so closely contested by the entire fleet. Just 51.8nm separated leaders, Dongfeng Race Team, from the last-placed boat, Team SCA (Sam Davies/GBR), and with light winds expected in the final stretch, there was every possibility that the fleet could bunch even closer together.

In a message from his boat, Caudrelier wrote: “Since last night, we re-took the lead again and with it, the pressure of being in front. To be in the lead after all the hard knocks we’ve taken on this leg is without doubt one of our team's proudest moments since the start of this race (on October 11 last year). We’ve had really hard moments, phases of total exhaustion, and moments of real frustration and anger, but onboard there is always someone ready to motivate the others, someone with a positive outlook.”

The Chinese team’s success so far has been all the more extraordinary for bouncing back from a partially disconnected mast track, which attaches the mainsail to the mast, a week ago. The Dongfeng crew dropped back to last place while it was repaired, but within 48 hours had picked off the rest of the six-strong fleet, one-by-one, to claim the lead.

Caudrelier continued: “I’m looking forward to the next few days. The two main obstacles are the crossing of an old weather front in 24 hours’ time, and the finish, which looks light. I’m not sure yet whether it’s upwind or downwind, it’s not clear. It could be a total restart, but I am really hoping that if it is, it’s between the current top three. The other boats are now quite a long way back, but anything could happen still.”

Abu Dhabi Ocean Racing’s skipper Walker agreed: “I expect local winds and currents could decide our fate towards the end and it is very hard to imagine anything other than a very, very close finish. Until then, we continue to work on our speed and try to get ever closer to Dongfeng.”

Walker's team were just one point behind Dongfeng Race Team in the overall standings after three legs of nine. In all, the race will cover 38,739nm, visiting 11 ports and every continent, finishing in Gothenburg, Sweden, on June 27.