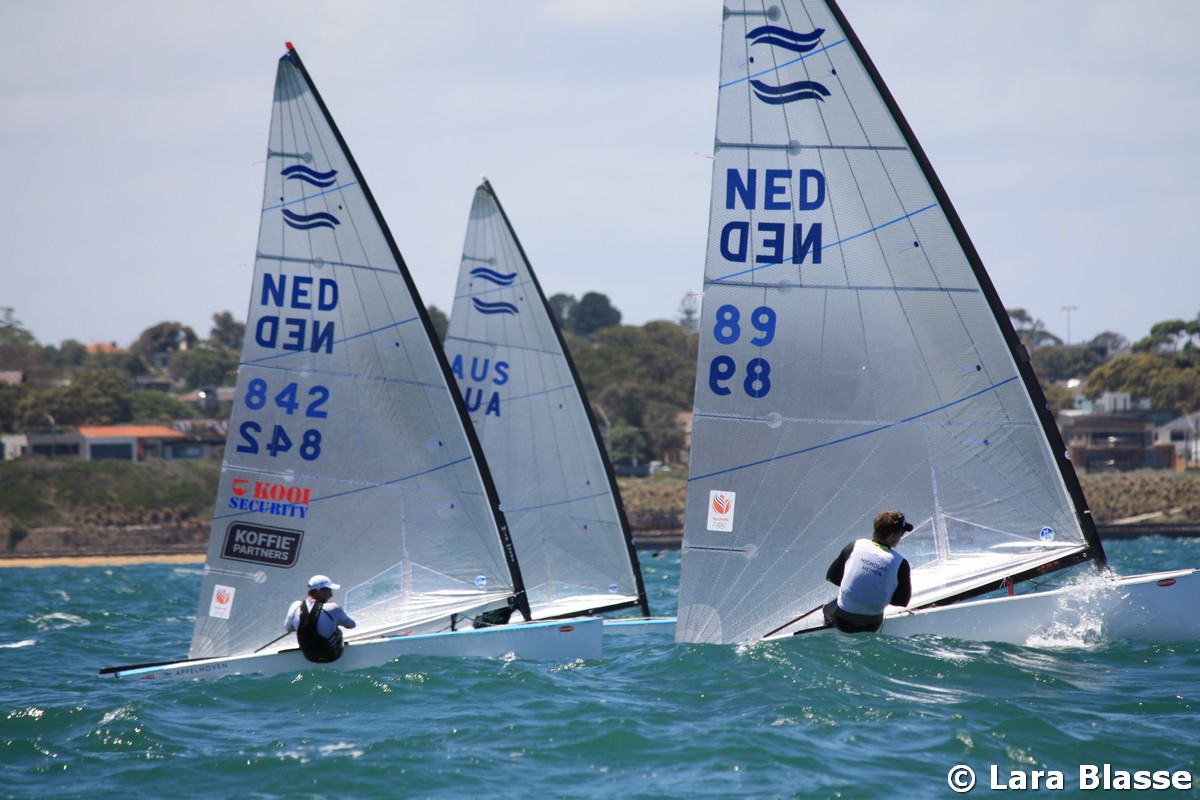 Although the sea breeze didn't build to the proportions of Tuesday, it was solid all day. The day started with overcast skies and a strong southerly wind at 20 to 25 knots. The forecast was south to south-westerly at 15 to 20 knots, but a number of the fleet were wary as all the indications were the sea breeze would come over the top of the gradient at a similar strength to Tuesday.

The fleet was sent out on time for a 1300 start in a 15-knot southerly. There were no sail changes today as everyone had their heavy air gear on the boom. The fleet was slightly down from the 40 boats as a small number decided the wind strength was maybe beyond them and watched from the balcony at Black Rock Yacht Club, 300 metres from the start line.

Race 3 went into sequence under ‘U’ flag and was general recalled with most of the boats pushing the pin. The second attempt under Black saw a more even spread with Giles Scott starting mid line and tacking immediately onto port to cross the fleet. The top boats pushed the left and by the top mark it was Heiner, Postma and Maloney. Heiner led from Postma on the Dutch free pump fest down the run.

The Race Officer extended the second beat as the fleet were going too fast, but the top boats were all very close, in the big shifts. Heiner went on to win the race from Maloney while Scott moved up to third.

At the end of Race 3 a few more boats headed to the harbour as the breeze was starting to build. It seemed the sea breeze was in with completely clear skies and unlikely to build more.

Race 4 started under ‘U’ and was again a general recall. Black was hoisted and the fleet got away cleanly on the second attempt. The left side again paid on the first beat and first around was Henry Wetherell, from Britain, and Postma, who seemed to have resolved his problem from Race 2 on Tuesday.

The breeze stayed at 18 to 22 knots with ‘mint’ sailing conditions and the 1.4 nm windward leg took its toll on the middle to back of the fleet. Postma soon found the front and went on to win the race from Scott and Heiner.

Within the championship there is also some great racing in the various categories. In the all-Australian Under 23 fleet, Lachie Gilham is sailing very well, now on equal points with Jock Calvert. Harmon Macaulay struggled to get going in the first race, but found another gear to be amongst the top guys in the second.

Calvert commented on his day, “It’s fantastic racing with this quality of fleet at clubs that I’ve been sailing at for years. The guys here are absolutely among the best in the world and to be able to watch how they go about their business, and to learn from them is an awesome opportunity.”

“Today I had a couple of good moments and was racing in the top pack for parts of the races. In the first one I was around the top mark in fourth, and the second one I was just behind the good guys. But 1.4 miles to the top mark is a really long way and it’s really exposing my fitness. In both races I pretty much blew up and fell backwards through the fleet. So good to have some positives with my strategy and tactics, but lots to do on the physical side of things between now and the European season.”

“The competition between Lachy and myself for the U23 title is really tight. For the last couple of years I’ve contested it, it has usually come down to the last race with only a point or two in it, and this year looks no different, so I’m looking forward to that challenge of the next few days and trying to get back the title.”

In the Legends (over 70) Dirk Seret, had great pace and showed the Legends resting on shore that it was similar to a lovely Adelaide sea breeze.

The best of the rest is Phil Chadwick, the Australian Finn President, just on the back of the first half of the fleet and the leading Grand Master.

“I am loving racing the young guns and my master mates. Black Rock is turning on a classic show with 13-20 knot breeze each day. I feel fit and powerful for first race each day and old and knackered in the second race. The young fellas seem to work harder when the masters get on their heals.”

“The Finns are thriving in Australia and excited to be hosting the Gold Cup in December.”

At the bar after the race, there was a presentation for the first two days. Young Josh, a RIB crew, went in the water three times, including looking for Postma in his upturned hull. Rafa Trujillo was awarded a BRYC cap for his rescue work, including today when he swam and righted an upturned boat. Mike Flavell, a crew on course boat had his first ever sail in a Finn in 25+ knots… before one of the coach boats and young guys could take over and take the boat to the harbour.

Finally Australian Finn class Life Member, John Shallvey, stuck it out for two races after some coaching advice from Trujillo, “don't catch any waves, don't go fast down wind, safety first”, and sure enough, he finished both races on his birthday and is in the mix for the Grand Grand Master.

Heiner said of the day. “Great day of sailing again with two races in a really nice sea breeze. Champagne sailing for sure. It was also good to have a great day on the water in terms of results, so just a great day of sailing on the bay. We are looking forward to another, hopefully three more, of these kind of days. I have got enough to work on and will keep ticking away.”

He could get his wish as the forecast for Thursday is for more of the same.

Racing at Black Rock continues until Saturday with two races scheduled each day to complete a 10 race series.