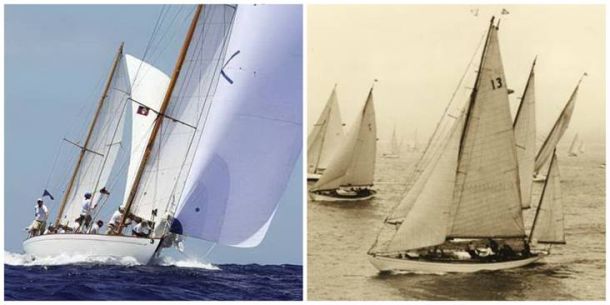 Dorade present and past. Photos courtesy of Dorade “Return to Blue Water”.

NEWPORT, R.I. (June 4, 2015) – In late June, one of sailing’s most celebrated yachts will attempt to retrace the steps of her first and most significant victory. The 52-foot yawl Dorade, owned by Pam Levy and Matt Brooks (Tiburon, Calif.), will join 40 other boats competing in the Transatlantic Race 2015, which starts off Newport, R.I., and finishes off the southwestern coast of England. The race is organized by the Royal Yacht Squadron, the New York Yacht Club, the Royal Ocean Racing Club and the Storm Trysail Club.

Dorade, the seventh design from the Sparkman & Stephens design shop, was barely a year old when Olin and Rod Stephens and a crew of five sailors, including their father, started the 1931 Transatlantic Race off Newport, R.I., bound for Plymouth, England, 2,800 miles away. The trip took just over 17 days. Dorade was the first boat to finish and the race’s overall champion on corrected time.

For the Stephens brothers, it was a transformative moment: in the coming years, they would each take on primary roles in the development of the sport.  Dorade would make her own wake as well, stringing together an impressive, unparalleled for the time, series of victories on the East and West Coasts of the United States and in Europe.

After a series of significant re-fits, the boat was returned to original condition a few years ago by Levy and Brooks. Perfect for installation in a museum, many said, or for civilized day racing on the classic yacht circuit. But Levy and Brooks had other plans, namely to take the grand dame of ocean racing and repeat all of the races it won in the 1930s, including the Transatlantic Race, Newport Bermuda, Transpac and Rolex Fastnet.

“Everyone said we were proposing something that wasn’t even in the realm of possibility,” says Brooks of Dorade’s four-race “Return to Blue Water” campaign. “Now we’re coming up to the last two races—the Transatlantic Race 2015 and the Rolex Fastnet Race—and no one is questioning that the boat can do this.” (Two years ago, Dorade won overall, corrected-time honors in the Transpac Race, beating a host of the latest carbon-fiber rockets; in the 2014 Newport Bermuda Race, she took first in her class under IRC.)

“Olin and Rod designed one hell of a boat,” says Brooks. “I haven’t met anyone who has sailed on her who doesn’t learn to love her and trust her. She’s very strong, very dependable; she just needs to be treated right. With wood boats, you’re always in refit mode. But we’re racing and sailing this boat 10,000 miles a year and she absolutely responds to that.”

Winning silver with this historic yacht requires a comprehensive commitment. Brooks, Levy and their team are constantly maintaining and refining the yacht. This past winter, says Brooks, getting the bottom as smooth as possible and improving sail design were two areas of focus. Sailing the boat also requires a specific touch.

“If you are trying to muscle the boat into submission at the helm it is never going to happen,” says Levy. “It will win. Having a balanced helm is critical.”

For the Transatlantic Race 2015, Brooks and Levy have set as their first goal to beat the 17 days, one hour and 14 minutes it took Dorade to sail the course in 1931. Modern technology, including synthetic sail fabric, should give this year’s team an edge; however, the course in 2015 is likely to be quite a bit longer than it was in 1931 due to an extreme number of icebergs in the Grand Banks of Newfoundland. The fleet will be required to sail east for a while before turning north for the Great Circle Route, which takes advantage of the earth’s slightly oval shape to shave critical miles off the passage between the United States and Europe.

Whether or not they can match the boat’s pace in 1931, Brooks and Levy couldn’t be more excited about the prospect of this legendary yacht coming full circle to its first significant accomplishment.

“Of all the races we’ve done, the Transatlantic Race is the one that makes our heart go pitter patter, because it was Olin and Rod’s first big victory, and it’s what launched them in business in yacht design,” says Levy. “We know from talking to Olin’s family and from what he has written that he had a real affection for the boat. It gives us a lot of pleasure to do well with her.”

More about the Transatlantic Race 2015

The Transatlantic Race 2015 charts a 2,800-nautical-mile course from Newport, R.I., to Lizard Point, South Cornwall, England. The race is organized by the Royal Yacht Squadron, the New York Yacht Club, the Royal Ocean Racing Club and the Storm Trysail Club. Pre-start activities will take place at the New York Yacht Club’s Harbour Court clubhouse in Newport, while awards will be presented at the Royal Yacht Squadron’s Cowes Castle clubhouse on the Isle of Wight. Three separate starts – June 28, July 1 and July 5 – will feature 40-plus boats ranging from the newest designs of 2015 to those going as far back as 1915.

For a list of entrants and their respective race starts, visit http://bit.ly/1BDPZcm