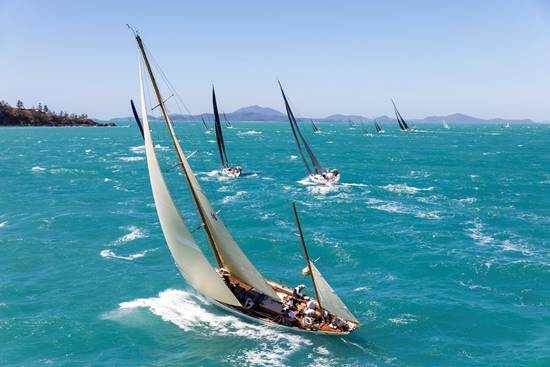 The “Dorade Down Under” campaign is in full swing, and Dorade, the 86-year-old Sparkman & Stephens classic yacht, is proving yet again that age is just a number with the team taking podium finishes in the first two events of its five-race series off the southern coast of Australia.

“Dorade is an amazing yacht to be in the hunt against some very competitive modern boats at a very technical venue,” said tactician Kevin Miller about Dorade taking third place in the 370-mile Brisbane to Keppel Race and second place in IRC Passage Division 2 at Audi Hamilton Island Race Week, both of which concluded last month. “The boat and the team are performing well down here, even up against conditions that aren’t ideal for Dorade. She is an incredible yacht and always seems to surprise us.

“We’re just coming off of a very challenging week competing against a very talented fleet at Hamilton Island Race Week, and although we’re tired, we have a great feeling of accomplishment and look forward to our next challenge.”

Before taking on the 628-nautical mile Rolex Sydney Hobart Race in December, the “Dorade Down Under” team will head to New South Wales in October for the Bass Island Race and to Sydney in November for the Bird Island Race.

Designed in 1929 by 21-year-old Olin Stephens and built under his younger brother Rod Stephens’ supervision, Dorade’s revolutionary design – a deep keel with external ballast, an achingly narrow beam of just 10’3”, and a generous sail plan – took the yachting world by storm, quickly establishing the Stephens brothers as two of the sport’s most gifted innovators. In 1931 the brothers raced Dorade in the Transatlantic Race from Newport, Rhode Island to Plymouth, England, competing against much larger boats owned by some of the world’s wealthiest sportsmen and crewed by veteran sailors. With an upset victory that made headlines around the world, Dorade was the first boat to finish by a margin of more than two days. In the decade that followed, she continued topping the charts in some of the world’s most renowned offshore events, including overall victories in the Fastnet in both 1931 and 1933 and the TransPacific Race in 1936.

After purchasing Dorade in 2010, Matt Brooks and Pam Rorke Levy spent a year restoring the yacht to its original condition before kicking off the “Return to Blue Water” campaign. Their goal with the campaign was to repeat all of the major ocean races the yacht had won in the 1930s, matching or bettering her original performance in the Transatlantic, Newport-Bermuda, Fastnet and TransPacific ocean races. The campaign was successful beyond their wildest dreams, with the team not only bettering Dorade’s original times in all of the races, but also reaching the podium in every race and winning the 2013 Transpacific Yacht Race overall on corrected time, 77 years after Dorade won that race for the first time. In 2015, the campaign wrapped up with stellar performances by an all-star crew, placing second in class in an exceptionally rough and windy 2,800-mile Transatlantic Race, followed by second in class in the Rolex Fastnet Race, where Dorade finished 7th overall out of 356 boats.