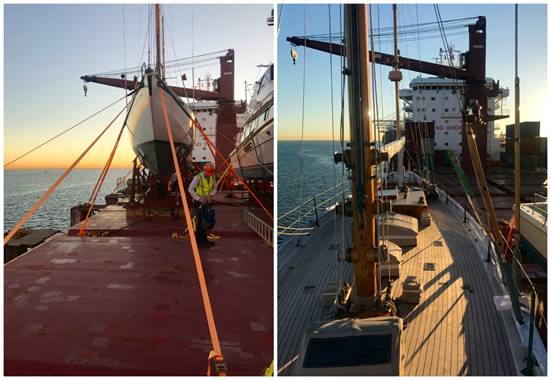 BRISBANE, AUSTRALIA (July 27, 2017) : The 86-year-old Sparkman & Stephens classic yacht Dorade made yacht racing history in the 1930s and holds a competitive edge over its modern counterparts to this day. The 52-foot wooden yawl arrived in Brisbane earlier this week to begin putting her reputation to the test with its “Dorade Down Under” campaign. The ambitious program consists of seven races off the southern coast of Australia, including the formidable Rolex Sydney Hobart Race in December.

“Back in her heyday, Dorade's success was unparalleled by any other yacht’s on the circuit, and for us it's all about preserving that legacy and integrity and proving that she can race at the same level as the new grand prix yachts and be competitive,” said Skipper Matt Brooks who has co-owned Dorade with his wife Pam Rorke Levy since 2010.

Prior to the “Dorade Down Under” campaign, the duo led the yacht and its team to success in its “Return to Blue Water” campaign where the goal was to repeat all of the major ocean races the yacht had won in the 1930s (Transatlantic, Newport-Bermuda, Fastnet and TransPacific ocean races). The team not only bettered Dorade’s original times in all of the races but also reached the podium at all four events.

“What sets this year’s campaign apart from our past endeavors with Dorade is the fact that this is the first time the yacht has ever been to this hemisphere,” added Brooks. “We are taking to new waters, literally, and though Dorade has raced in almost every major ocean race in the world, this will be the first time for her and for us to take on the Sydney Hobart Race.”

Celebrating its 73rd anniversary this year, the Rolex Sydney Hobart is a little more than a decade younger than Dorade and is considered by many to be one of the hardest races in the world to win, with competitors going up against big seas and tricky conditions in some of the toughest areas of ocean.

“Staying competitive is no small feat and it requires building a top-level team of professionals both on and off the water as well as months and months of preparation for the boat and the crew of sailors racing it,” said Brooks. “Our approach with Dorade is the same as any other professional modern racing team.”

Before making it to Australia, the team was hard at work on the West Coast preparing the yacht and undergoing sea trials with the crew. The team also raced in a number of races, including the SoCal 300 and the Newport to Ensenada Race, where it took first and second in its class, respectively. For the SoCal 300, the team brought on famous Australian navigator Adrienne Cahalan, a Volvo Ocean Race veteran, who has won the Rolex Sydney Hobart race four times. For the Newport to Ensenada Race, the Dorade team was joined by Matt Wachowicz, an America’s Cup and Volvo Ocean Race veteran.

“The purpose of racing in these two events was to give our crew as close a test to the Sydney Hobart Race as possible, which can be light and tricky as well as full on heavy air,” said Dorade Tactician Kevin Miller, adding that the races helped the crew get familiar with the boat and get a feel for everyone’s strengths and weaknesses onboard. “Both Adrienne and Matt were there to help us narrow our focus on the areas of concern. The boat is strong and we didn’t have to make any major changes, but it was just learning how to use Dorade’s qualities to help us in Australia.”

The team kicks off its campaign on August 4 with the Brisbane to Keppel Tropical Yacht Race. Later that month, Dorade heads to the Whitsunday Islands for Audi Hamilton Island Race Week followed by the Gaffers Day Race, the Bass Island Race and the Bird Island Race in Sydney in October and November. The campaign wraps up at the end of December with its pinnacle event, the Rolex Sydney Hobart.

Designed in 1929 by 21-year-old Olin Stephens and built under his younger brother Rod Stephens’ supervision, Dorade’s revolutionary design – a deep keel with external ballast, an achingly narrow beam of just 10’3”, and a generous sail plan – took the yachting world by storm, quickly establishing the Stephens brothers as two of the sport’s most gifted innovators.

In 1931 the brothers raced Dorade in the Transatlantic Race from Newport, Rhode Island to Plymouth, England, competing against much larger boats owned by some of the world’s wealthiest sportsmen and crewed by veteran sailors. An upset victory that made headlines around the world, Dorade was the first boat to finish by a margin of more than two days. In the decade that followed, she continued topping the charts in some of the world’s most renowned offshore events, including overall victories in the Fastnet, in both 1931 and 1933, and the TransPacific Race in 1936.