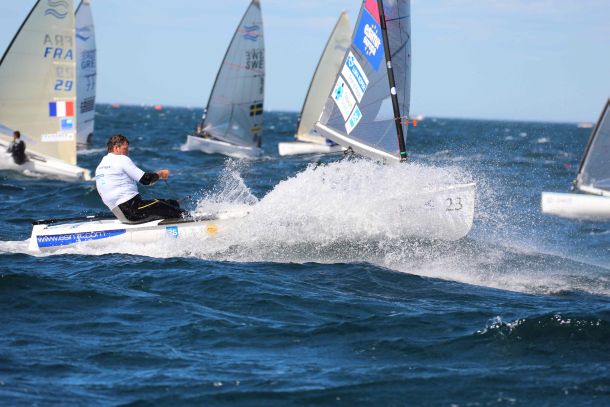 Not only is the Dinghy Academy serving as a fantastic training base to a number of established sailors, it is also acting as a staging post for young sailors taking their first steps in the Finn, somewhere they can learn the ropes, get the best advice, and plan a campaign of substance and direction.

Since early 2013 more than 50 sailors, ranging from juniors up to Grand Masters have made use of the facilities and the coaching and training opportunities on offer. Head Coach, Luca Devoti is ardent that the Academy is there for everyone and encourages Masters to train there as much as he does young sailors. The Swiss and Russian Masters are already frequenting the centre on a regular basis.

However he recognises that the future of the class lies with its youth and attracting new blood into the fleet. Together with the Finn Class through the FIDeS (Finn International Development Support) programme he actively seeks out sailors to join the programme, for example Laser sailors who have grown too big, and emerging talents from developing nations. Over the past two years the Academy has helped sailors from many nations developing sailing from Africa, the Caribbean and South America.

Santiago Falasca (ARG) is currently receiving FIDeS funding to train in Valencia. “I came here last year when I began in the Finn. I have improved a lot and sometimes I am already catching the guys who have done many Olympic campaigns. So I am feeling very confident and very good about the future. I think this year is going to be a breakthrough year, a very important year to change and improve and break through to the professional sailors. Hopefully by Takapuna [the Finn Gold Cup, the second Olympic qualifier] I will be fully prepared and will make some good races and have good regatta.”

“I have improved my free pumping a lot. Last year it wasn’t a good thing for me but I have improved. Also I am now up to 96 kg – last year I was 85 kg – so I feel much more confident in the strong winds, and I have still have very good upwind speed in the light. I still need to improve my downwind in light winds, but I think with this training all year in Valencia I will manage that.”

Falasca talked about using Valencia as his base, ”I think it is probably the best place to learn everything. We are always sailing with the top guys of the Finn class. We have a gym here, we have a top coach coming all the time to give us advice. We have every aspect of the training covered. Coaching on the water, coaching in the gym and physiotherapy. Everything is covered. Of course having a coach that has a silver medal in the Finn is also very positive. He knows a lot about how to sail the Finn and about the materials we need to improve our sailing.”

But it is not just beginners training in Valencia. One of the international fleets fastest rising stars, Josh Junior (NZL), is also an occasional visitor to Valencia. “It’s pretty awesome training with a good bunch of guys and normally pretty good weather. You get some pretty good racing with some really good guys.”

One of the newest Finn converts to the class is Rockal Evans (BER). At two metres tall and a lean 104 kg he towers over almost everyone. At the time of writing he had only spent five days in the Finn after coming to the decision to do an Olympic campaign. He took the trip to Valencia, jumped in a Finn provided by the Academy, sailed in the Valencia Open regatta and began the vast learning process.

“I’m still getting comfortable in the boat but am really starting to get the feeling upwind with speed and the power, but I still need to do a lot of work on the downwind technique. In the last race I was fifth at the last upwind mark but rounded the gate in about 25th, so I caught up a lot. I find it very comfortable. I used to sail a Laser, but the Finn is way better for my size.”

“In Lasers, I used to do better when it was windy, but suffered in the light. I won a few events in Bermuda and got a couple of top fives in all island games.”

“I am in Valencia for three weeks to train to try and get the feel of the boat. Hopefully I will be able get a boat back in Bermuda and train there and do a couple of regattas in Europe. But for that to happen I need sponsorship, a lot of sponsorship. There are no Finns in Bermuda, but I am trying to get one now, either from the States or from Europe.  Hopefully, with the America’s Cup coming to Bermuda, there will be a bunch of guys I can train with and maybe help with getting a boat there.”

“In the summer I hope to come back here for another month, but I need some boat time first and get more familiar in the boat and more time on the water.”

He is in no doubt about the path he has chosen but appears committed to the task in hand. “If Rio is possible then I’ll try for that, but I will definitely be trying hard for Tokyo. It’s a long-term plan. It’s a lot of hard work but I am fully committed to it.”

He has a lot to live up to. His grandfather, Howard Lee, competed for Bermuda in the Finn Class in the 1976 Olympics.

In 2014 the Dinghy Academy became an ISAF Approved Training Centre following a full audit of its operations and facilities. Luca Devoti explained, “So far this has not really had much impact on our operations, though with time I hope that such a prestigious acknowledgment will help us grow and promote the sport even more.”

Devoti has a lot of plans for the future of the Academy. “I am trying to put together a programme that includes studying and a degree in economics starting from September 2016 in conjunction with a local university so that sailors can also get an academic qualification while they train.”

This coming June the Dinghy Academy and the Real Club Nautico will host the Finn Junior World Championship, for the Finn Silver Cup. Already Devoti sees the synergy between the emerging youngsters and the established sailors based there, some of which are on their fourth Olympic campaign. Transfer of knowledge is an important part of the Finn culture, and there are plans to put this into practice with a coached regatta and training sessions designed to bring as many of the juniors up to speed as possible.

The diversity of sailors using the facilities in Valencia speaks volumes about the success of the programme. As well as the Spanish team there have been sailors from Argentina, Australia, Bahamas, Bermuda, Canada, Croatia, Czech Republic, Hungary, Italy, New Zealand, Portugal, Russia, Slovenia, South Africa, Switzerland and Uruguay. It is a truly international bunch of like-minded sailors all focussed on one goal – getting better at Finn sailing. And they way they are going about it, you are left in no doubt they will succeed.