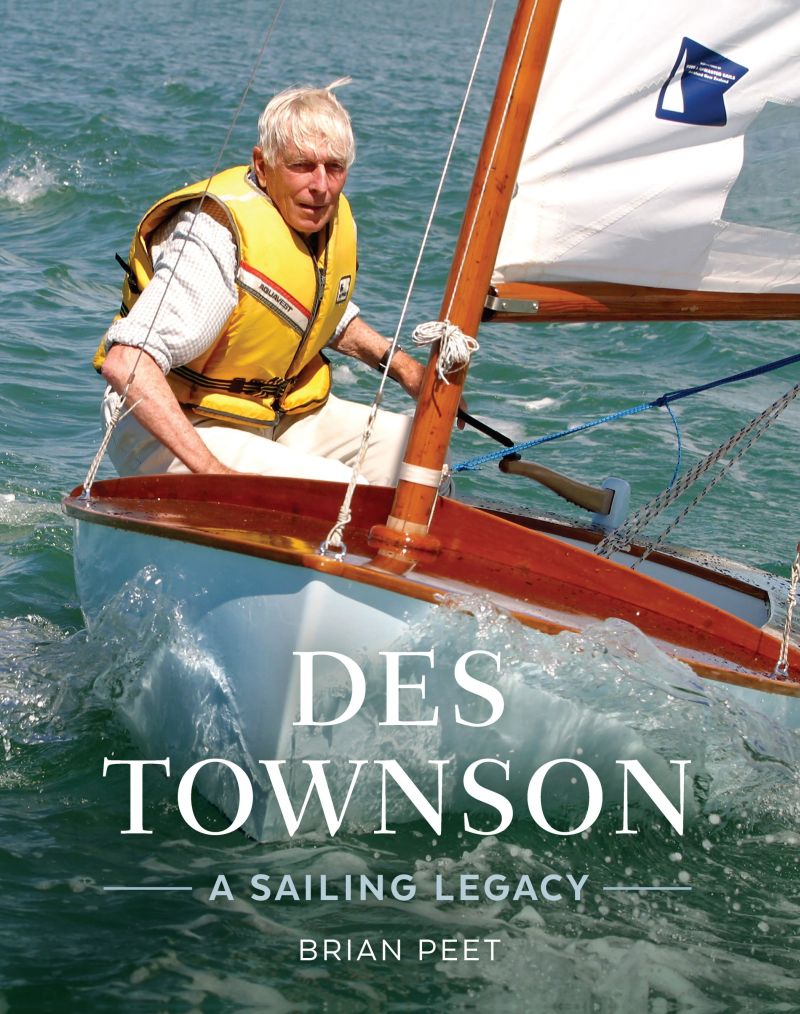 This is a book that every Kiwi sailor should buy. But it’s one that will appeal to a huge number of Australians too. Because, as well as detailing fifty years of Kiwi boat design and building techniques, it goes a long way towards explaining why there are so many New Zealanders at the top of the world sailing tree.

Des Townson began designing and building his own boats in 1951, when New Zealand was still in the grip of post-war shortages that meant if you wanted a luxury item like a boat, you had to make it yourself.

His first effort was an 8ft pram dinghy, which led onwards to sailing dinghies and then to the famous Nimble, a 12ft Q Class. But it was the Zephyr Class, a one-design that is still sailed by adoring devotees to this day, that really made the New Zealand sailing scene take notice of this rather eccentric man.

A beautiful-looking sailing dinghy that is also a pleasure to helm, in 2016, 60 years after the first hull was hand-built by Des, 86 Zephyrs lined up for the National Championship. It was won by hull #9, showing that it is not necessary for the sport of sailing to introduce a completely new design every three or four months!

But perhaps his most significant dinghy design, and one that led a lot of New Zealand’s greatest sailors to their ultimate careers, was the Starling. Over 1400 have been built since 1969.

Olympic 49er champion and America’s Cup winning skipper, Peter Burling, says, “From the first time I raced a Starling I couldn’t get over how balanced and how fast the boat went. The Starling rewards being sailed like a proper boat.”

From sailing dinghies, Des moved on to small keelboats, specifically designed for the magnificent sailing to be found in Auckland’s Hauraki Gulf. While there would be many different designs from 22ft to over 46ft in length, perhaps the most famous and easily recognised is the iconic Pied Piper, which author Brian Peet describes as “a small but gutsy 22ft plywood home-project boat” that “captured the imaginations and hearts of teenagers and young adults across the Auckland yachting community”.

“Piedies just used to smoke everywhere. It was incredible how quick they were, there was absolutely nothing that could touch us,” said owner Tim Snedden in 2013, again giving testimony to the longevity of many of Des Townson’s designs.

A self-taught designer with no regard for the rating rules, Des is portrayed as a bit of a loner who hated having to deal with potential buyers and had a large sign outside his boatyard effectively telling people not to come in.

His cruising boats were famous for their spartan interiors, which one observant customer noted could have been a result of his prolific design output – when Des sailed into any bay in the Hauraki Gulf, there would be at least one of his designs anchored there and he would be invited over for dinner – therefore obviating the need for a big and sophisticated galley on his own boat.

From 1951 until 2007, Des Townson came up with 78 different designs, from which plans 3716 boats were built. Many of them still grace the waters of Auckland Harbour, the Hauraki Gulf and further afield, including Australia.

The book is magnificently illustrated with photos and drawings of many of the designs and it chronicles the life of an interesting and significant contributor to the sport of sailing.

Author Brian Peet, a family friend of the Townsons, draws on his inside knowledge of the Townson design process and more than 60 years of sailing almost every boat that Des ever built.

Peet is also an excellent story teller. The book is well-written, with a good balance of anecdotes and technical detail.

To order direct from the author, go to www.destownson.co.nz.