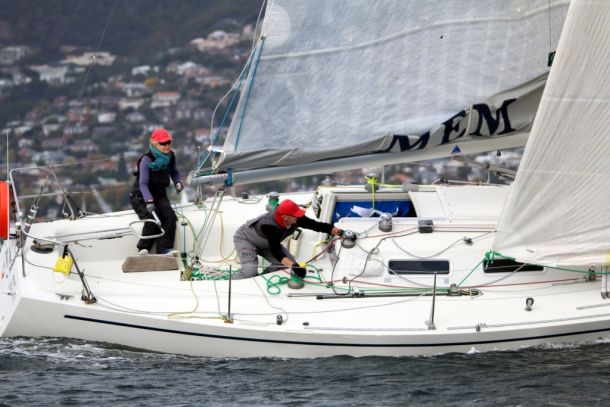 Getting crew to help race their boat can be a problem for many yacht owners during summer, but there was no such difficulty on the River Derwent today when Derwent Sailing Squadron began its popular autumn short-handed series. A big fleet of 45 yachts raced and all they needed were 89 men and women to handle them, including spinnakers on many boats, compared with almost 300 crew required for a summer harbour race fleet.

This year’s Quantum six-race short-handed series has been expanded to include a three-handed spinnaker division as well as five two-handed divisions, two of them non-spinnaker.

The series is probably the largest short-handed yacht racing series in Australia with 55 boats entered so far. Last year saw 70 boats in one race and more are expected for later events.

Sailing in a chilly sou’wester that ranged from 0 to 15 knots, with some sharper gusts, well-known Bellerive yachtsmen Chris Sheehan and Troy Grafton sailed Sheehan’s Young 88 Saga to victory in Division 1 (spinnaker), winning on corrected time from Redeemer (Greg Brooks) and Trouble (Dave Willans).

The Royal Yacht Club of Tasmania’s newly acquired Elliott 6s made an impressive debut on the Derwent, finishing first and second across the line and in the same order on handicap in Division 4 (spinnaker).