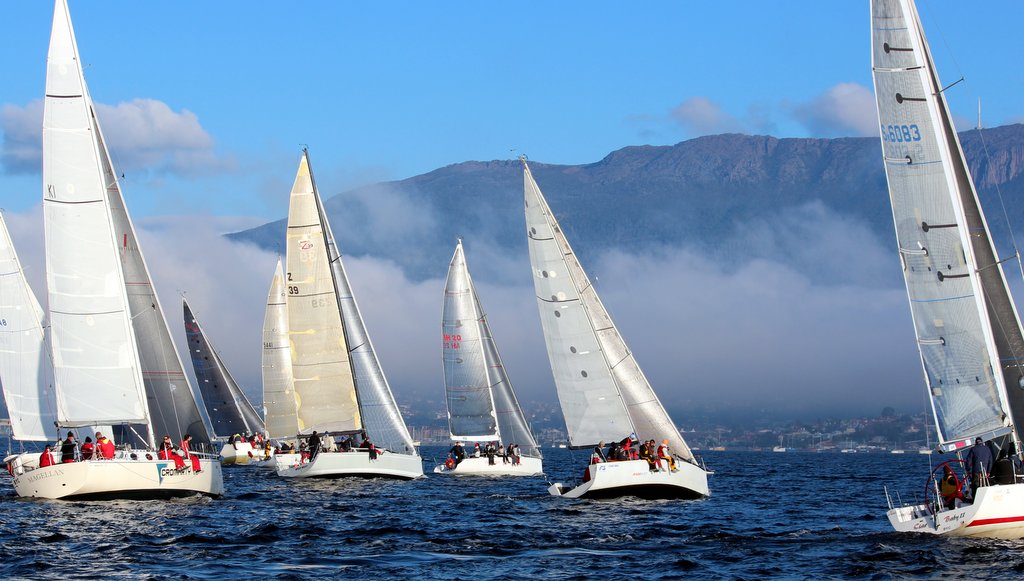 In a duel around the course in a light to moderate northerly breeze on the River Derwent, Mike and Michelle Denney’s Wild West beat Shaun Tiedemann’s Philosopher across the line by just 17 seconds.

On corrected time, victory went to Philosopher, the former Sydney based yacht, her first win on the Derwent, the margin here being 68 seconds.

This winter, DSS club manager Tiedemann and his youthful crew are racing Philosopher in the DSS series and, across the river in the BYC series.

Sailing manager Denney obviously can’t compete in the DSS Winter series but is enjoying the Division 1 racing with Bellerive.

Line honours went to Ian Stewart’s Mumm 36 Tas Paints which recovered well after being over early and having to restart, and then forced to the Eastern shore. Tas Paints placed third on corrected time.

In close racing, just over a minute separate the first four boats at the finish.

Today was a classic winter morning for racing on the river, with Hobart’s ‘Bridgewater Jerry’ (a fog that moves down the river) making its presence well and truly felt. In fact, the city and main harbour were blanketed in thick fog from dawn until it began to lift just before the race start time.

Racing finished with conditions bright and sunny, but with a high wind chill.

After three of BYC’s five-race Winter Series, Tas Paints and Jeff Cordell’s B&G Advantage on equal points, 8, in Division 1, with Janene Frawley and Gavin Adamson’s Madness on 11 points. All three are Mumm 36s.

Trouble (Dave Willans) is on 10 points in Division 2, one point ahead of Wildfire (Malcolm Robinson) and 1.5 points up on Saga (Chris Sheehan.

Innovator (Ian Smith) is on 9 points in Division 3, with Kama (Rod Cushion) on 11 points and Velsheda (Brian Bick) on 12.