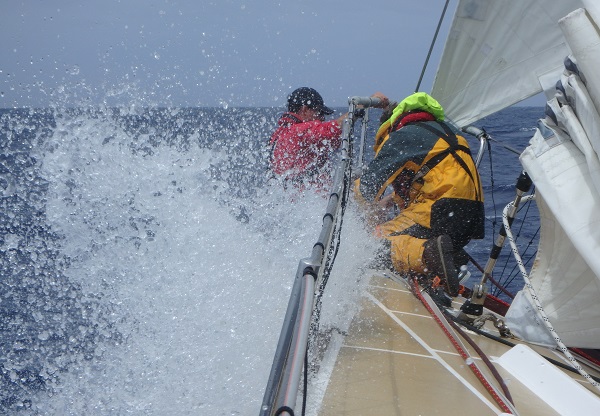 Four teams have completed the Ocean Sprint section of the course and are counting down the miles until the finish in Cape Town.

All teams pushed hard with good average speeds of around 12 knots but it was Derry~Londonderry~Doire which recorded the time to beat so far, completing the 300 nautical mile section in  29 hours, 22 minutes. GREAT Britain was next closest with 29 hours 56 minutes whilst Mission Performance got 31 hours 23 minutes, and fleet leader Garmin recorded 32 hours 08 minutes.

ClipperTelemed+, Unicef, Da Nang-Viet Nam, IchorCoal, PSP Logistics and Visit Seattle are currently in the midst of their Ocean Sprint battles, with time results to be updated later today.

With around 750 nautical miles to go to the finish for the front of the pack, teams are studying the weather files in anticipation of a high sliding round the bottom of Africa which could hinder progress at the end of the race.

Diane Reid, Skipper of fifth-placed ClipperTelemed+, said: “Most of our strategy right now is based on weather file information and choosing the best route we can.  We have chosen to “ride the next front” without climbing too high too early on the latitude to Cape Town.

“Part of our strategy with the weather includes the weather to come in the next few days. Eventually this front will slip around South Africa and we will be left with the remnants of the high pressure system to fight our way in to Cape Town. We are trying to pick the path of least resistance and most wind on our way in on our final approaches.”

For westerly yachts LMAX Exchange and Qingdao, the crews have been working hard to maximise boat speed in the low pressure system. But with gusts in the high 40s for Qingdao, Skipper Igor Gotlibovych said it was sometimes becoming a matter of enduring the racing rather than going for all-out boat speed.

LMAX Exchange Skipper Olivier Cardin described the conditions his team had been facing, including gusts of up to the mid to high 50’s: “For the last two days, we have been sailing very fast with about 35 knots of wind. The waves are now big, some should be about 10 metres and it's very impressive to surf them. The boat accelerates to 20 knots so fast. The ambiance on deck is wet as we are sometimes submerged entirely.

“The crew begin to be tired with these weather conditions. Today, we should see the wind dropping a bit. Making nearly 300 miles per day, we are happy, but from Tuesday, we will have lighter conditions with a high just passing over us for another time.” added Olivier.

Who will be fastest over the Ocean Sprint to win the final bonus point of Race 2: The Stormhoek Race to the Cape of Storms?