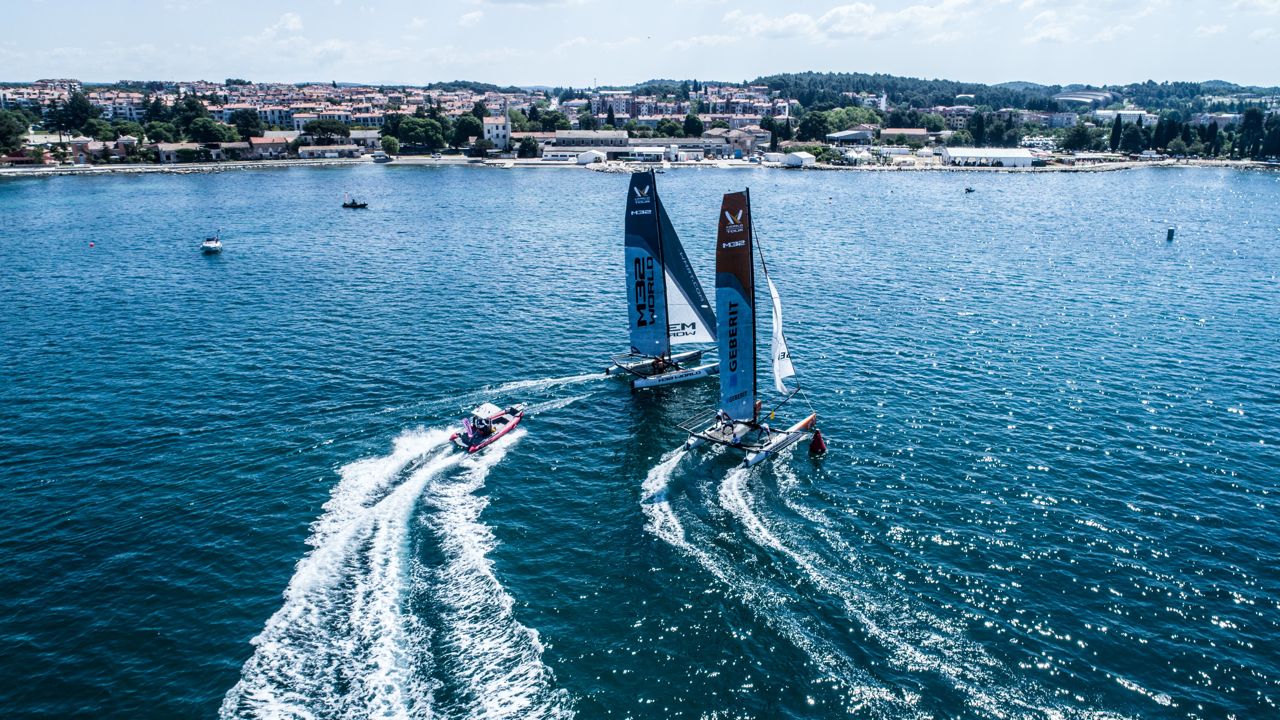 Porec, Croatia (May 29th, 2017) – The French team surprised early in the qualifying round by topping the leaderboard on day one. With incredible boat handling throughout the regatta this team have taken the M32 in their stride with impressive form. Even with today’s unpredictable and fluctuating wind conditions Team Lorina-Golfe du Morbihan kept calm to take victories through to the end.

Topping the qualifying session, Delapierre chose to sail locals Croatia Match Race Team. This decision looked like a bad move as the Croatians dominated the prestart and led off the line and took the win to a roar of applause from Croatians watching from the race village.

Croatian skipper Sime Fantela won the prestart again in the second match of this first-to-two-point semifinal. As Fantela led at the reach mark it looked to be all over for the French, but with his years of multihull sailing experience Delapierre managed to pull his way back and as the boats split upwind he took the lead. The drama was building as both these teams with little prior match racing experience faced a sudden death match to progress to the final and to win qualification to WMRT Match Cup America. Both teams pushed hard in the prestart but the Croatians were deemed over-aggressive by the umpires and given a penalty. The French team being so dangerous on the course with their boat speed allowed them to extend on this lead following the penalty and were uncatchable.

In the other semifinal pairing Sailing Team NL were up against Danish ART Sailing. In the closing seconds of the prestart the Dutch team positioned themselves to just lay the pin end of the start having sailed Aschenbrenner below layline. Aschenbrenner tried to luff and get across the line but hooked the mark and was stuck, writing himself off for this battle. In the second match Postma and his team from the Netherlands again won the prestart and this time used their experience in the boat to extend away from Aschenbrenner through the race.

With Quentin Delapierre’s French team and PJ Postma’s Dutch making top two finishes they secured themselves an invitation to WMRT Match Cup America. Now with nothing to lose and everything to gain the gloves came off for a first-to-two-point final. Delapierre definitely took the ‘nothing to lose’ element seriously as he flew into a huge luff just before the gun. Umpires deemed Postma’s reaction to be too slow as he took a collision and received a penalty in the process. Delapierre lead the race from this point on.

The Dutch team fast shook off the loss and came back with an aggressive prestart themselves, forcing the French over the start line early. From this advantage Sailing Team NL just continued to lead the full length of the course.

In the final match the pressure had grown and an even start took the boats side-by-side to the reach mark. The boats split at the leeward gate. Left alone on the left side of the course, Delapierre and crew just extended out ahead and held their advantage through to the finish to take the race and win the Croatia Match Cup.

Delapierre was very humble to credit his performance to fantastic physical work by his crew. “I just rely on my crew so hard to be in such physical shape. This is such an important part of these boats, if you don’t have good physical performance then these boats don’t go forwards. I owe the racing to Kevin Peponnet, Matthieu Salomon and Corentin Horeau.”

With the next stop scheduled to be WMRT Match Cup America, Quentin looks forward to the event without any specific targets, just to enjoy the experience and make the most of time on the boat. “On the WMRT I just saw videos on YouTube. I have no idea what to make of this next level. For WMRT Match Cup America we will sail at our level. We hope that this is a good enough level. If not then it’s already a good experience to sail against teams like Canfield. We have the chance to practice with Spindrift. They are very close to us in Brittany and hope that they will accept.”

Both teams will be serious contenders when they arrive in America for the Championship level event and could upset Tour Card holders.