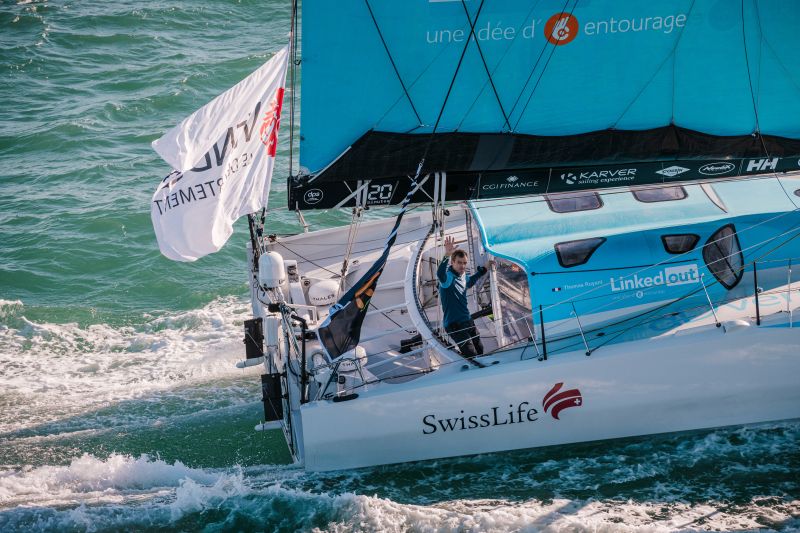 While Nicholas Troussel is motoring slowly into a lumpy sea, his Vendée Globe abandoned after his mast was broken early yesterday morning, this afternoon in bright sunshine and light winds off Les Sables d’Olonne, Jérémie Beyou was resuscitating his own race, restarting some 2,700 nautical miles behind leader Alex Thomson who was negotiating the first hours of his Doldrums passage on HUGO BOSS.

Promised a smooth passage through the 300-350 miles wide Inter Tropical Convergence Zone by the weather gurus, Thomson should be first across the Equator in the middle of Wednesday morning. On current routing models he is likely to be around one day slower than the record he set at 9 days 7 hours when he led the 2016-17 race into the Southern Hemisphere.

There is a certain symmetry compared to the 2016-17 race. Four years ago Thomson led Armel Le Cléac’h by a little more than 50 miles. He is in front again this time but it is the hard driving Thomas Ruyant who has cut the British skipper’s margin by 40 miles to around 88 miles. Coincidentally at this same time four years ago it was Tanguy De Lamotte whose hopes for his Vendée Globe were dashed by the race’s first broken mast.

Beyou was full of hope and positivity when he set off on a balmy, almost Mediterranean afternoon in Les Sables d’Olonne, sent on his way by hundreds of well wishers. But he admitted that re-calibrating his mindset which for four years been hard wired towards winning the Vendée Globe would be in itself the biggest challenge.

“It’s not going to be easy because I’m leaving so much later. But now I just have to go. No more thinking. I just can't wait to get back to sea. Having managed to mobilize myself is in itself a first win. After that I hope there will be more things to keep me going as I progress. But I don't really know what these things will be. I don't know how to put it in words. I'm going to explore myself a bit. I'm completely away from all my reference points here.

“For four years I have been just in the condition, in the state of mind to give 100 per cent all the time to preparation, to give everything on the race course. Now we are in a different game the goal posts have moved I have to forget everything and then find a new way of doing things. I’m definitely no longer in my comfort zone here.”

He seems assured of a fast passage south on the first days of his pursuit of the 31 boat fleet, his nearest ‘target’ being Fabrice Amedeo at 1000 miles range. At Cape Finisterre he should be able to hook into a low pressure system which will catapult him south to benefit from favourable winds on the east side of the Azores high pressure system.

Meanwhile Troussel who this morning had some 180 miles still to motor to Mindelo in the Cape Verde Islands, voiced his misery. On a video call this morning, his eyes hollow, his face drawn, he confirmed that he was below decks asleep when his mast crashed down in the gusty tradewinds.

“It was just before sunrise and I was asleep and went up on deck and saw the damage. My priority then was to get the mast off and away from the boat because the sea was quite choppy. Then you realise that it is all over.”

The Doldrums look like they might offer Thomson and the lead group a free pass. The skipper from Gosport and his nearest rival Ruyant have seen their speeds ease to 14-15kts but the zone between the NE’ly and SE’ly trade winds is quite narrow.

“It's not just a transition between two winds, it's also a transition between two seas,” said Sébastien Josse and Christian Dumard, the weather consultants for the Vendée Globe. “The seas will not be as smooth as you may think. Speeds will be more erratic and courses more varied. To get out of here you have to cross directly at right angles and… stay calm. Each metre gained south is one metre gained towards the exit of the tunnel,” continues Sébastien Josse.

From Madeira to the Doldrums, the 2020 Vendée Globe wagon train spans some 1,600 miles (2,900 km) of ocean. Now, finally, almost the entire fleet is in the trade winds and making decent progress. But to the west of the Canaries in a localised ‘doldrums’ of persistently light winds five competitors are continuing to have their patience tested.
entete-quotations2x.png

“I’m starting to get the first hint of the Doldrums as we approach them. We’re almost there and already a few squalls can be seen on the satellite images. I am looking at them regularly to try to find a narrow passage through. They don’t look too active, but you never know what you’re going to get. There is always a surprise each time,” said Thomas Ruyant, who is second on LinkedOut

“I’m starting to get really hot. These aren’t the conditions I enjoy most. Inside the boat, it quickly becomes a furnace with the generator charging up. But we have a good angle to sail quickly, so it’s perfect for sailing now. I have 18/20kts and am at 110/120 degrees from the wind. Conditions are pleasant, even if at times it is a bit wild, as we accelerate away quickly. The Doldrums are 300/350 miles wide. So we can hope to get out of there tomorrow evening, if everything falls into place, but it could take much longer. It’s complicated getting accurate forecasts.”