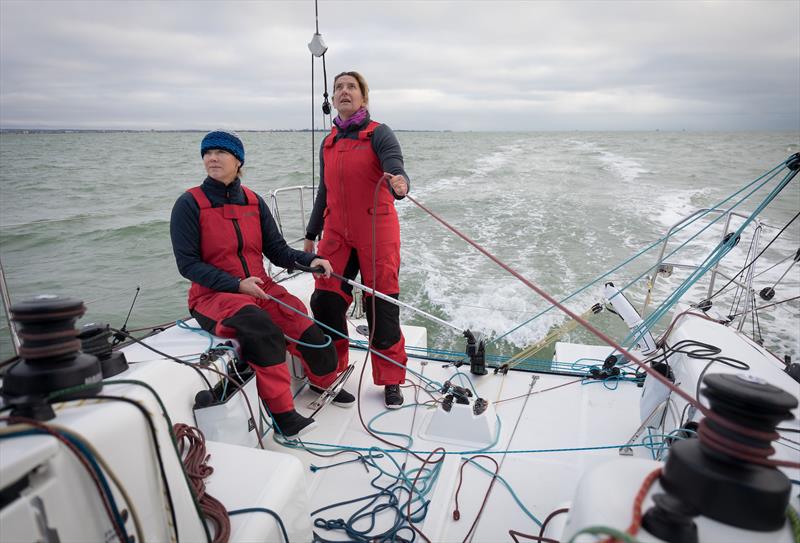 Dee Caffari and Shirley Robertson will be sailing together throughout 2022 in the UK Double Handed Offshore Series. Pic - Tim Butt

Without question, one of the biggest trends in offshore sailing has been the rise in global popularity of double-handed (AKA two-handed) racing.

Double-handed teams now compete in all of the great offshore races. And it’s caught the attention of many great sailors. This list includes Dee Caffari and Shirley Robertson, two of the world’s absolute best sailors, who have teamed up to take on the UK’s 2022 Double Handed Offshore Series.

I checked in with Caffari and Robertson, via email, about their recently announced campaign for the UK’s 2022 Double Handed Offshore Series.

Can you please tell us a bit about how you and Dee became teammates? Have you guys sailed together before?

DC: We spent last season competing against each other and so it is nice to now come together. We have never in fact sailed together on the same boat, and [we] obviously come from the two extreme ends of the spectrum of our sport, but with both our co skippers from last season moving onto different projects this year, [sponsor] Sea Ventures suggested we team-up together, and we both agreed it would be a great fit and a fun project to do together.

SR: Dee and I have raced against each other over the last two seasons in the doublehanded UK scene—both our teammates were moving onto other things for 2022, [so] teaming up seemed like a fantastic option. We’ve never sailed together before (except during a photoshoot), [so] developing a strong partnership quickly is part of the adventure!

What strengths do you feel you each bring to the table? Also, how do you see those strengths complimenting each other on the water?

SR: Dee has been around the planet six times, twice on her own in both directions. She’s seen it all…and more. Her seamanship, navigational knowledge and experience at sea is just vast. I have none of that but I hope I will help add to the intensity, keep the push. I’m good at steering a boat quickly, and in doublehanded sailing, there’s plenty of that.

For the full interview, see: https://www.sail-world.com/news/245818/Dee-Caffari-and-Shirley-Robertson-on-DH-sailing