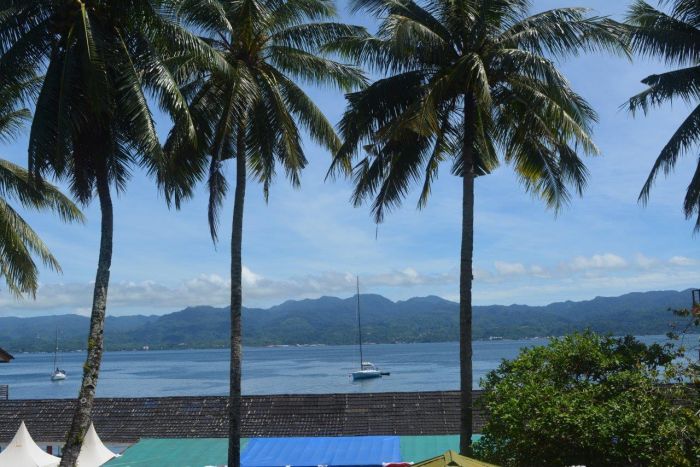 The 2019 Spice Islands Darwin Ambon Yacht Race began in champagne conditions on the morning of Saturday August 3rd. An enthusiastic crowd gathered on the wharf and a group of supporters enjoyed a sponsored chartered to watch the start and bid the 70 participants fair winds and safe passage.

At 634 nm, the race is slightly longer than the Sydney to Hobart and takes place in the glorious tropical climate of the north, attracting boats and crew from around Australia and beyond. It’s not only the sailing that draws people in, but also the fabulously warm welcome, friendly people, carnival atmosphere and great way to kick off a sailing adventure around the Indonesian islands.

First to start was Wallop, a Jeanneau 509 skippered by race regular, Marcus Ilton. The rest of the fleet was hot on their tail and within minutes the fleet were under spinnaker and heading out of Darwin Harbour.

Geoff Hill on Antipodes, a Santa Cruz 72, crossed the line in just over 58 hours, taking out line honours and the IRC trophy for 2019. Colie a Hanse 575 skippered by Doug Sallis won Cruising Monohull.

The delightful Cockatoo a 29.5 foot Crowther made her return to Ambon after a 23 year break, having first competed (and set the race record) in 1987 and then participated regularly until 1996. She made a memorable return skippered by Matt Punch, Deb Negus & Brian Hallett, taking out the trophy for the multihull division and staking her place back onto the race honour board.

Another notable mention must go to Rick Setter and his Mottle 33 Pandora. Rick and his two crew ducked inside Stokes Hill Wharf less than one hour before the start to make some last minute repairs to their mainsail, completing the job just in time for the start.

The winds were kind with all yachts arriving in good time despite a few breakages on the way. Crews were able to exchange stories and share in the comradery that is the ‘Ambon Race’.

The reception received by participants in Ambon has to be seen to be believed. Dancing, singing, dining and good times featured throughout the week.

Garth Curran joined the race in 1997 and has raced multiple times since bringing his yacht ‘Walk on the Wildside’ up from Fremantle for each race.

Mr Curran said the children in Ambon are overwhelmingly welcoming. “I hope we can encourage more boats from the eastern side of the country to compete with us.”

Mr Curran said the most rewarding experience is not on the water, but interacting with the community in Ambon. “One arrival in particular was really special, a brass band was floating on a raft to welcome us into the docks — my crew were just in awe,” he said.

This year a call went out to participants for donations of ukuleles as Nico Tulalessy, Chair of the Ambon Sailing Community had initiated the ‘Ukulele Kids Project’ aimed at getting kids off computer games and singing and playing ukuleles. The project has been so successful it has been introduced into 3 school curriculums in the first 6 months.

The race participant’s donated 32 ukes and were rewarded with a concert performed by around 100 kids on the beach in Amahusu.

“Ambon is known as the island of music, everyone sings and dances and now almost everybody plays ukulele!” DBCYA Commodore Joy Eggenhuizen said.

“As our gift to the community who open up their shores to our skippers every year, we would like to provide them with the instruments.” she said.

Participants were also treated to a visit to a local high school providing an opportunity to meet students before being treated to an exhibition of traditional dance and music. Each year the race provides donations of books, games and school resources to a different school and this visit is often a highlight for many.

The Spice Islands Darwin Ambon Yacht Race is truly a race for all comers – with four divisions and yachts (and crew) of all shapes and sizes there is something for everyone. This year’s crews included an exceptional 6 husband/wife teams and 8 father/son teams, making it a real family affair. In 2017 one of the yachts crews even managed to span 3 generations!

In 2020 the race will also be part of the SAIL NORTH SERIES which will incorporate 5 international offshore races with the best 3 to count. A brilliant alternative to southern sailing for 2020 and opening the gateway to the Asian Circuit for many.

If you’re keen to know more about our race or to register your interest for 2020 (August 8, 2020) contact entries@darwinambonrace.com.au.