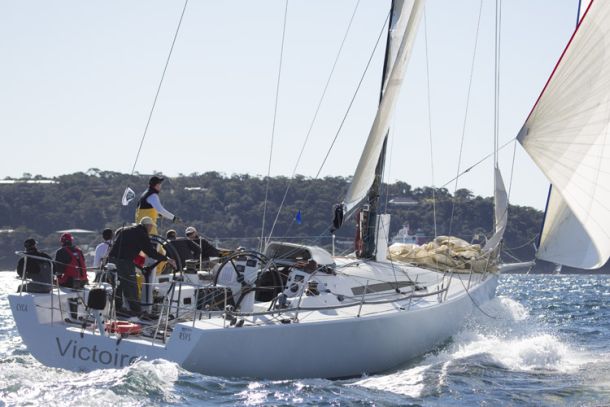 It came down to the final race of the season to determine the divisional winners of the Land Rover Winter Series and 122 competitors in the Cruising Yacht Club of Australia organised race were treated to a stunning winter’s day with just the right amount of breeze.

“We knew that we had to beat Next by one extra place to take the series and fortunately we achieved that,” Forster said this afternoon. “I’m very excited to have won – it’s our first win in the Land Rover Winter Series. The conditions today suited us – we had a few issues with our spinnaker near Cremorne Point but managed to recover from that. We had a good tussle with the Sydney 38s – Next, The Goat and Calibre. There wasn’t much at the finish between us and Calibre.”

Speaking of the boat’s performance across the Land Rover Winter Series, Forster said “The light air races are our Achilles heel. We don’t do so well in anything under 10 knots of breeze. We picked up a few firsts throughout the series and have been consistent throughout the other races.

Forster and Damp have owned the boat since 2011 and will compete in their first Land Rover Sydney Gold Coast Yacht Race later this month. They will also campaign Ariel in the Cruising Yacht Club of Australia’s Blue Water Pointscore. “We’re looking forward to what the Gold Coast race will bring – we have been committed to ocean racing since we purchased the boat and have completed two Sydney Hobarts,” Forster added.

Next (Richard Holstein) placed second to Ariel with The Goat (The Goat Syndicate) third in the overall series with Papillon (Phil Molony) placing third in today’s race behind Calibre and Ariel.

Race Officer Steve Kidson got the fleet away on time, on their respective course A, in 13 knots of westerly breeze.  “It’s a gorgeous day with good consistent breeze and flat water. The breeze is flicking either side of west but has settled in”

The Victoire team have added another trophy to owner Darryl Hodgkinson’s prize cabinet in addition to his Rolex Sydney Hobart and Gosford Lord Howe Island Yacht Race wins. The Cookson 50 finished first in today’s race and claimed the Division A1 series win on countback from Bob Steel’s TP52 Quest, which has just been purchased by money man Paul Clitheroe.

Sean Kirkjian was in control of Victoire, with Hodgkinson currently in Africa. “We were lucky today. We got the breeze where the boat excels and had a nice long reach to Manly doing about 16-18 knots.

“We were able to carry our spinnaker so we made a lot of ground on our competitors. Greenie (Mike Green) told us to stay out of his way and he managed to hold Quest back for us,” Kirkjian laughed. Green will join the Victoire crew for the upcoming Land Rover Sydney Gold Coast Yacht Race.

In Division D it was a triple treat for Damian Barker and his Sydney 36CR Alpha Carinae – they won the race today, claimed the divisional series win and walked away with the keys to the Range Rover Evoque for the week.

“I’m absolutely ecstatic to have won today and the series – it’s my first series win. We’ve had podium places before but never won it in all the years we’ve been competing in the Winter Series,” Barker said this afternoon. “Things really came together for us over the last couple of weeks. Having the same crew week in and week out has made such a difference for us. They each know their roles and their hard work and consistency is what helped us.

“Conditions today were perfect – we knew we had to win as we wanted to get rid of our results from Race 6, so we knew that we had to do everything right. It came down to the last tack. We were trying to hold off Crosshaven and I thought to myself ‘all we needed was for one boat to get between us and them’. As luck would have it we were able to tack inside of Astral and that put enough distance between us and Crosshaven,” Barker added.

“There was some tight racing out there today – we had a tacking duel with Stormy Petrel as we made our way to the finish line; and we were hunted by Gusto all afternoon but managed to hold them off,” Peter Lewis said.

“Wilson (the crew mascot) is very chuffed at winning the series – so chuffed he bounced straight off the boat when he heard we’d won the series! It’s been a great series – full of fun and we’ve had some great conditions.

As always, the LuLu Belle crew were well fed with lamb roast today’s speciality followed by champagne on the dock to celebrate the win “The only tragedy we had today was when we lost some of the mint sauce when we tacked suddenly,” Lewis added with a laugh.

Rob and Sue Segaert’s Beneteau Sense 46 Sante, the winner of Division J1, was the lucky recipient of the Noakes Group Lift & Stand Package.

The Closing Ladies Day race will officially bring the Land Rover Winter Series to a close. Racing will commence at 1130hours next Sunday, 13 July across two spinnaker and two non-spinnaker divisions.

All winners and placegetters in the Land Rover Winter Series are invited to celebrate their success at the prizegiving which will be conducted at the Cruising Yacht Club of Australia on Friday 18 July. Log onto www.cyca.com.au for further details and to book.

Go to http://www.cyca.com.au/sysfile/downloads/2014_winter/index.htm for full results