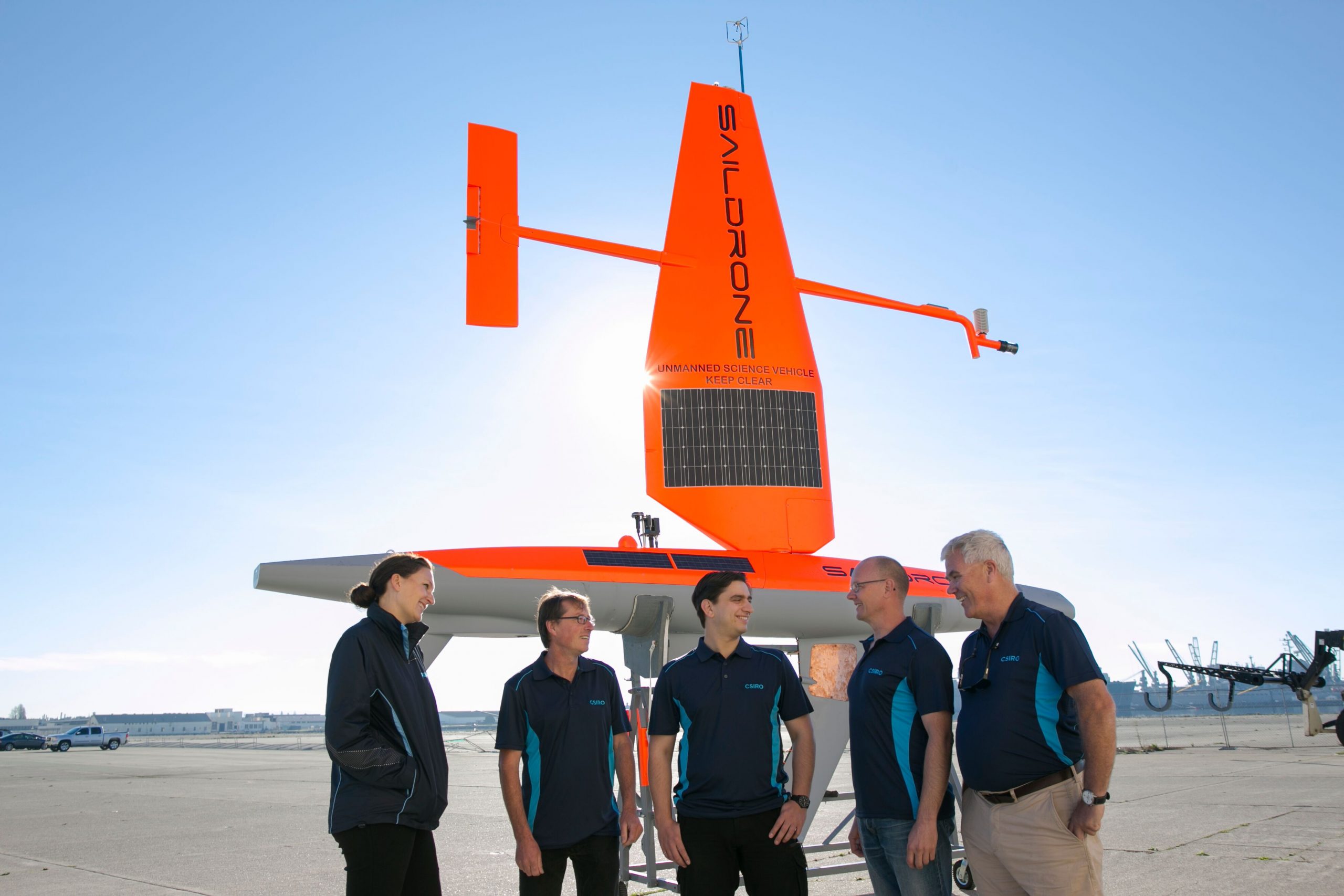 No, they are not the latest one-design racing yachts to join fleet racing on Hobart’s River Derwent!

The orange-winged craft on the river yesterday afternoon were the first in a fleet of wind and solar-powered autonomous vehicles called Saildrones, unveiled by the CSIRO in Hobart before setting off on a mission to capture valuable ocean data.

The high-tech, unmanned Saildrones are part of a Commonwealth and industry funded research portfolio and will be at sea for up to twelve months, initially in Bass Strait off the Gippsland coast of Victoria.

Their mission is to measure and monitor sea-surface temperature, salinity, ocean carbon, and biota – helping to paint a more detailed picture of the ocean off the Gippsland coast in Victoria.

The research will see the Saildrones deployed as part of research to test and validate technologies used for future carbon capture and storage (CCS) projects.

A team of technicians has spent the last week preparing the Saildrones for their maiden voyage in Australian waters. They will depart from Hobart before Easter.

CSIRO Chief Executive Dr Larry Marshall said, “Our partnership with Saildrone and the Australian Government builds on our investment in marine research infrastructure for the nation and supports CSIRO’s strategy for cutting-edge research which facilitates the monitoring and mitigation of climate change.

“The fleet of Saildrones may be small in stature, but their ability to autonomously monitor and collect rich streams of data at sea for up to twelve months makes them truly unique in terms of the value they can deliver industry, the research community and ultimately our biggest customer – the nation,” Dr Marshall added.

Saildrones are remotely controlled and their systems can be accessed from anywhere in the world using an iPhone. This means they can be reprogrammed to collect different types of data quickly instead of coming back to shore to change over equipment or sensors.

CSIRO has equipped each Saildrone with a powerhouse of ocean chemistry, meteorological and marine acoustic sensors. These sensors will capture and send live data back to the research team to analyse.

CSIRO scientist Dr Bronte Tilbrook said, “We have never had an opportunity like this before. By combining advanced sea faring sensing technology, we will be able to capture more data over longer period of time and provide credible information back to government, industry and the community.”

Dr Tilbrook added that the array of sensors also allowed the CSIRO us to deploy Saildrones for unique and complex tasks.

Whilst two Saildrones will collect data in the Gippsland Basin that will inform methods for monitoring future CCS sites, the vehicles can also be deployed to future studies in hard to reach places, like the Southern Ocean, where unprecedented climate and ocean data can be collected.