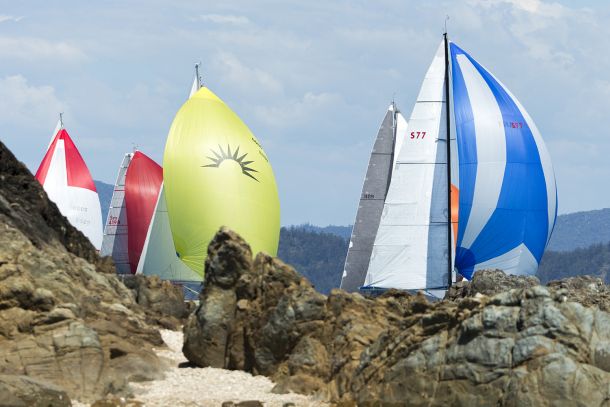 The ever-popular cruising divisions once again form the backbone of the Audi Hamilton Island Race Week fleet with 162 yachts of every size and vintage racing in seven divisions. But much has changed in the composition and character of that fleet over the last 20 years.

Michael Spies, a former 18 foot skiff sailor, winner of the Sydney to Hobart and Race Week administrator is well placed to offer some informed perspectives on this vital part of Race Week’s heartbeat.

“Twenty years ago the charter boats were the mainstay of the cruising divisions; anyone wanting to sail in Race Week would either be cruising in the area anyway or would opt for a charter. But these days there are more owners bringing their own boats to Race Week and the charter business has shifted more towards multihulls,” says Spies.

“The boats have also got bigger. Ten years ago Cruising Division 3 would have mostly comprised 32 to 35 footers; these days the average length is closer to 45 foot; there is also a significant number of 55 to 60 footers in Cruising Division 1. Owners are also buying production boats and going beyond the ‘poverty pack’, by pimping them up to get better performance and a choice of fittings,” he adds.

Chris and Ren Barlow’s recent purchase of the beautiful Platinum, a Bordeaux 60 built by CNB in France is a reflection of the trend. “This is a bit of a step up for us, as the last boat we had was an Oceanis 45,” says Chris. “The beauty of the semi-production CNB boats is the endless choices. We’ve gone for a carbon mast for some extra sailing performance and we have washing machines where others probably have wine fridges.”

Michael Spies also highlights the difficulties of handicapping such a diverse fleet, particularly given the differing motivations of the crews coming to Hamilton Island. “Forty percent of the cruising division crews are here purely for the participation in what is a marquee event; another 30% are regular club racers who are quite handy sailors, and the remaining 30% are out-and-out competitors. But the problem is that you’re handicapping the boats, not the people, and the performance difference can be huge.”

For Craig Watson, publican of the Court House Hotel in Mullumbimby and skipper of the Jeanneau 53 Coopers, that handicapping system finally came good on day 2, Monday August 17. “We’ve been coming here for 17 years and we’ve had plenty of seconds and thirds, but we finally got a win in Cruising Division 2 so we’re pretty happy about that.”

The next trend that Michael Spies is hoping to witness is the growth of the multihull and trailable divisions, even if significant growth in the former is going to test the already challenged berthing capacity of the Hamilton Island Marina during Race Week. “The marina manager, James Burrell, is an absolute champion. What he does each year is like the parting of the waves to get everyone sorted for this event!”

On the racing front, day 3 – Tuesday Aug 18th – proved complicated, with light and shifty winds. PRO Denis Thompson set courses he hoped would get boats around the course using the tide gates, but that didn’t always work out. A few boats took half a dozen attempts to get through Fitzalan Passage this afternoon.