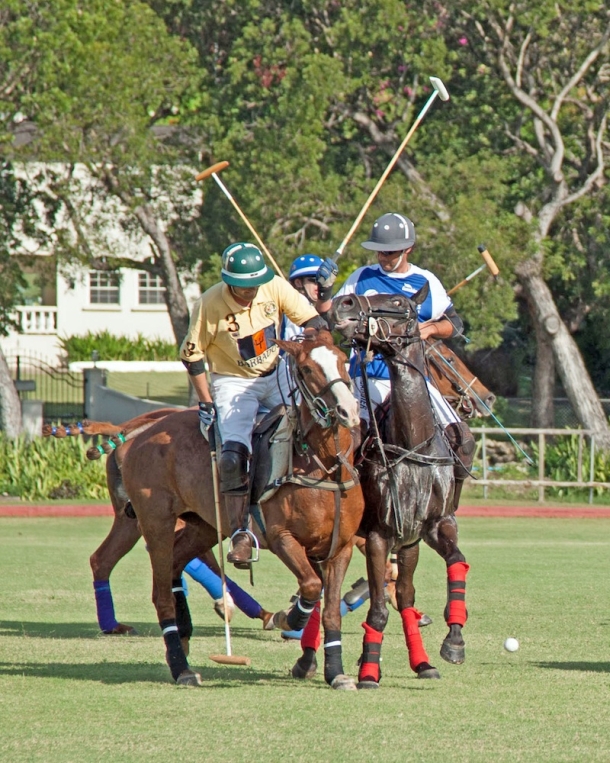 Sailors enjoyed a day of activities including a visit to the rum distillery and a polo match.

After three days of intense Coastal racing in the Mount Gay Round Barbados Race Series, many sailing teams were keen to make the most of today’s lay day activities.

A visit to the Mount Gay Rum Distillery in the morning, and an afternoon soaking up the colonial-style hospitality at an exhibition polo match at Holders Polo Field provided plenty of relaxation in preparation for the Mount Gay Rum Round Barbados Race tomorrow.

This headline event , which traditionally takes place on a public holiday to celebrate Errol Barrow Day (the birthday of the first Prime Minister of Barbados, and ‘father of independence) is one of the key attractions of the annual Mount Gay Round Barbados Race Series.

The 60-mile sprint clock-wise round Barbados has sparked a lot of interest with many teams keen to have a serious attempt at the outright record. The forecast however, is unusually light winds, which could affect the chances of however.

John Coveney the event’s Principal Race Officer, commenting on the conditions said: “It looks as though the conditions will remain fluky, similar to what we’ve experienced over the last few days, which is quite unusual for this time of year. It will be a generally light one with the current forecast showing winds no more than 12kts, which is not looking good for record-breaking opportunities.”

There are some real serious contenders within the 33-strong fleet this year including Andy Budgen and team on the British VO70 Monster Project who are here to defend the outright monohull round Barbados record they set last year with a time of 4 hours 42 minutes 28 seconds.

Joining the VO70 are two VO60s Cuba Libre, and Ambersail, a Farr 72 – Maximizer – chartered by the American Embassy in Bridgetown, plus Conviction the local TP52 sailed by Paul Johnson, Clint Brooks and team representing the Barbados Offshore Sailing Syndicate (BOSS), a local project that promotes youth in sailing.

One of the most graceful yachts on the start line will be the 55m classic racing schooner – Elena of London– skippered by Steve McLaren and his 18-strong team. Elena is the current Classic division record-holder with a time of 6 hours, 11 minutes, 19 seconds set in 2011.

Chatting about the ideal conditions for a boat of this type, Malcolm Banks, crew boss, said: “For us to have any chance of breaking our own record we need 18kts or more, which means we have to make a VMG of 9kts. We are hopeful but the majority of the weather forecast for this area are generally indicating light airs.”

Raimundas Daubaras, skipper of Ambersail one of the two VO60s, and his Lithuanian team, said that the Mount Gay Rum Round the Island Race is one of the key reasons they are at the regatta. They too are looking for a decent breeze.

Daubaras said: “This event has a lot of history and is famous for that so we are pleased to be here. We are really keen to see how she performs against the other VO60. We do have a chance of breaking a record but it entirely depends on the wind conditions. Ideally to be in with any sort of chance we are looking for 20kts or more. Sadly, the wind forecast is not looking good for us. Whatever happens we’ll enjoy it, and we plan to be back next year.”

Cuba Libre the charter VO60 arrived in the Caribbean with the Atlantic Rally for Cruisers (ARC) fleet last year. Benedikt Clauberg skipper, said: “This is the first big event in the Caribbean season and we are very much looking forward to the big race tomorrow. For us it is the key event and the reason we are here.

“We have a mixed charter crew for the race, a new combination sailing together but we are used to that so. We have a full sail wardrobe but depending on the ability of the crew we will make a decisions as to what we’ll use tomorrow. Although the aim is to achieve a good result, our priority is safety, then fun. I find that once the team starts to have fun, the competitive spirit increases.”

With over 30 yachts taking part, there’ll be staggered starts from a committee boat line just off the Barbados Cruising Club commencing with the slowest boats at 0700. This means there’ll be plenty of opportunity to view the action from the beach.

The course will take the fleet clockwise round the island and the predicted time at North Point is between 1000 and 1400. The most testing conditions are likely to be on the rugged east side of the island where there is big swell. Although it entirely depends on the weather, the yachts should start to cross the finish line at 1500.