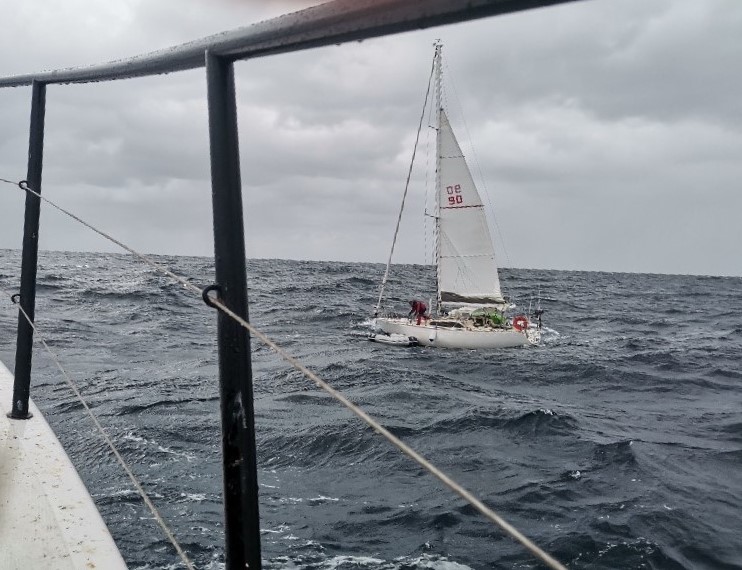 The stricken yacht had a foot of water over the floorboards. Photo Marine Rescue.

A crew from Marine Rescue UIladulla has rescued a solo sailor from a 33 foot yacht taking on water and sinking in perilous conditions off the Illawarra coastline.

A crew from Marine Rescue Ulladulla has returned the solo sailor safely to shore at Ulladulla, where he was met by his relieved wife. The man is reported to have sustained some bruising but is in otherwise good condition.

The crew located the yacht off Flat Rock. Conditions were too hazardous for the rescue vessel to come alongside the yacht so after lowering his sails and deploying his anchor, the man made it into his dinghy and was hauled to the rescue vessel and taken on board.

Deputy Commissioner Alex Barrell said the courage and commitment of the volunteer crew members had saved the man’s life.

“This man is extremely fortunate. He was caught in an emergency that could have had a very different and tragic outcome if it were not for the bravery and skill of our volunteers,” he said. “The crew has shown great fortitude and knowledge to locate this yacht and safely transfer the man on board in the hazardous conditions off the coastline this morning, with a north-east wind gusting up to 20 knots, a 2.5m swell and heavy rain limiting visibility on the water.

“These are terrible conditions for a search operation but our volunteers have put their own discomfort aside because a life was in danger.”

“This operation is another demonstration of the bravery, dedication and experience of our volunteers, who will respond around the clock, in all kinds of conditions, to bring someone in trouble safely home from the sea,” Deputy Commissioner Barrell said. “It also proves the value of our professional training and resourcing, ensuring our volunteers have the education and vessels they need to operate safely and effectively.”

The boater called Marine Rescue Batemans Bay for help this morning, reporting that he had a foot of water through the boat, when he was 5nm due east of Brush Island, between Kioloa and Bawley Point.

Crews from both MR Ulladulla and Batemans Bay immediately responded but the Batemans Bay crew headed back to shore when a crew member fell on board, sustaining a suspected back injury. She has been transferred to hospital and is in a satisfactory condition.