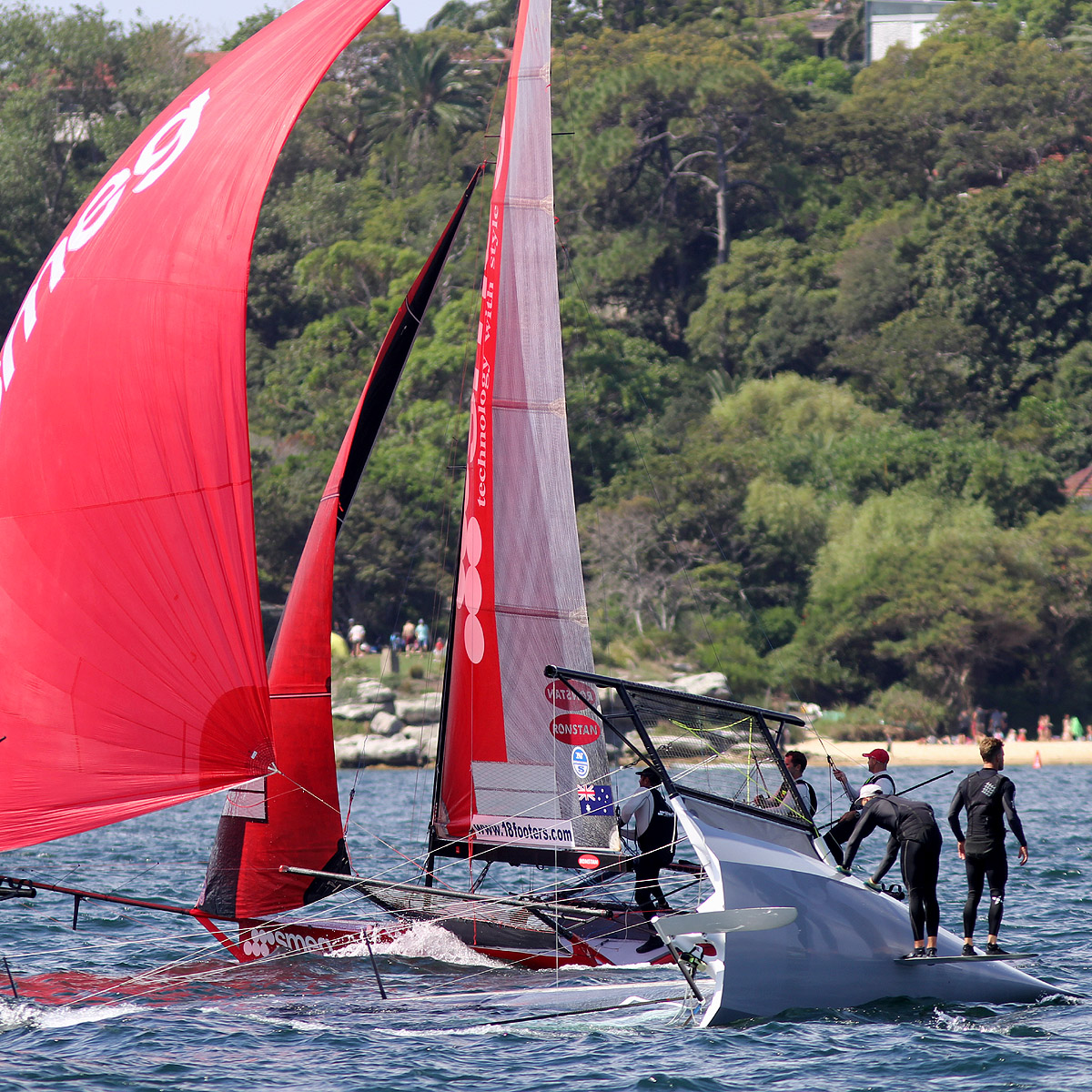 With the 2017 JJ Giltinan 18ft Skiff Championship just six days away, today’s Race 11 of the Australian 18 Footers League’s Club Championship on Sydney Harbour took on even greater importance than usual for the 19 teams contesting the event.

The recently crowned Australian champion Thurlow Fisher Lawyers team of Michael Coxon, Dave O’Connor and Trent Barnabas grabbed the lead soon after the start and, but for a brief period on the first spinnaker run, were never headed as they powered to a 2m53s victory.

With only one more race to be sailed in the championship, Smeg leads with 32 points. Coopers 62-Rag & Famish Hotel is next on 58 and Yandoo on 60.

After scoring an impressive win in strong winds last Sunday, then adding today’s victory in totally opposite conditions, Thurlow Fisher Lawyers has ‘firmed’ in the betting on another win for Michael Coxon in the JJ Giltinan Championship.

Thurlow Fisher led by 15s from Peroni at the first windward mark before the long spinnaker run down the harbour. Skippers had a wide variety of opinions on the best course to take and positions changed continually down the run

Ash Rooklyn left his final gybe on Noakes Youth longer than the other skippers and the move was a winner as Noakes Youth reached the bottom mark with a 15s lead over Thurlow Fisher. A fouled spinnaker of the Noakes Youth cost the young team at least three positions and they were never able to recover the loss.

Asko Appliances began to claw her way back towards the lead and looked a real threat as she moved to within 35s of Thurlow Fisher Lawyers at the Clark Island windward mark.

The experienced Thurlow crew remained faultless over the next three legs of the course and extended the lead to more than one minute and certain victory.

Peroni, Yandoo and Line 7 (Jonathan Whitty) had a great battle for most of the course and improved their prospects for the upcoming championship.

David Witt returns to skipper Appliancesonline.com.au next week and New Zealand’s champion Yamaha (Dave McDiarmid) will be out to make up for a one point loss last year.

The 2017 JJ Giltinan Championship will be sailed from 25 February-5 March.

(Sponsored by The Winning Group)

A spectator ferry will follow each of the seven races in the championship, leaving Double Bay Public Wharf, alongside the clubhouse, at 2.30pm on each race day.

All races will be streamed live to enable everyone to follow the entire championship on the computer or other smart device from anywhere in the world.