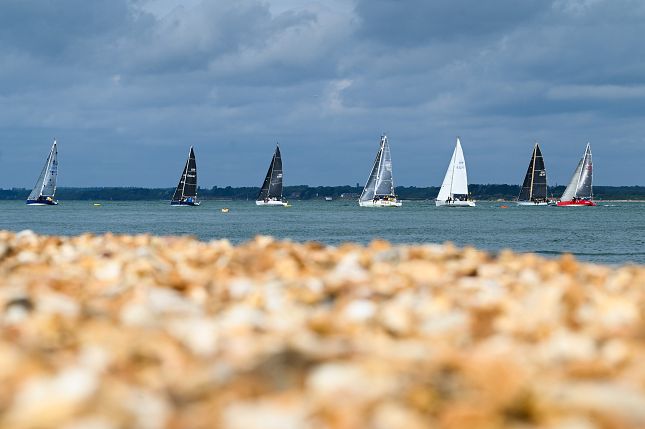 The Sonar class is holding its National Championship at Cowes Week. Today’s race saw close battles throughout the class, with places three to six decided by only 19 seconds, and 14th and 15th by just 9 seconds.

“The starboard end of the start was super competitive, but we nailed it and were first at the windward mark,” said Grier. “After that it was a tussle right round the course, chopping and changing places all the way with Jenny.”

ACF Dolphin then lost out through not hoisting a spinnaker on the tight and gusty reach to the finish. Nevertheless, it was a superb result for his team, including mainsheet trimmer Edward Kitchen, who’s blind and 50 per cent deaf.

Black Group yachts had a reaching start from the Royal Yacht Squadron line, with a building west-going tide sweeping fleets across the line. Most fleets were therefore understandably line shy, although a few were hopelessly optimistic.

Racing has been extremely tight in the Contessa 32 class this week and today’s results saw a shuffle of the leaderboard. Eldred Himsworth’s Drumbeat started the regatta with three consecutive victories, the fight for second place could not be closer. Ray Rouse’s Blanco, and his daughter Donna Rouse-Collen’s Andaxi started the day tied on equal points. Equally, in the battle for fourth overall only two points separated Kit and Jessie Rogers’ Assent and Rob Duke and Oli Donaghy’s Gualin.

Today, the fleet approached the line far too early, even though the west-going stream was now running fast. Charles Hill’s Nimbus was the wrong side of the line 15 seconds before the start, but was able to return to start correctly without a big loss. However, Drumbeat was on the wrong side of the line at the gun and didn’t return until 60 seconds into the race – a manoeuvre that cost four precious minutes.

At the finish Andaxi had a commanding lead of almost eight minutes on Nimbus, while Drumbeat took third place and Blanco was recorded as starting prematurely.

After a couple of minutes Arcus had pulled into a more advantaged position, while Peter Hayward’s J/109 White Knight 7, was also doing well, having pulled up alongside NJOS.

By the finish of the three-hour race, Elaine Again had built a 10-minute lead to take her second victory of the regatta. However, the next four boats were much closer, with Clemency Williams-Ives J/105 Jos of Hamble taking second place on corrected time, 10 seconds ahead of Arcus. Tony White’s Sun Fast 3200 Mzungu took fourth, his best result of the regatta so far, 20 seconds ahead of NJO Sails.

In IRC Class 5 the boats that appeared to get away first at the start didn’t make the top of the rankings today. Olly and Sam Love’s SJ320 Frank 3 took line honours, but failed to save her time on Giovanni Belgrano’s Laurent Giles classic Whooper, who took his fourth victory of the regatta on corrected time. There was then a big gap to the next finisher, Christopher Agar’s Half Tonner Secrets, who took third place both on the water and on handicap.

Performance Cruiser B is another class that has seen very close racing so far, with only two points separating the top three points at the start of the day. Gareth and Emma Jordon’s Maxi 1300 Salt was more punchy in approaching the line than the rest of the fleet, gaining an immediate 100 metre advantage on Adam Ridett and Phil Moore’s First 40.7 Challenger. Another First 40.7, Brendon McMahon’s Fandango, and Richard Strong’s Hanse 445 Solid Air, also looked reasonably well placed to observers on the RYS platform.

Fandango went on to take line honours and first place on corrected time. Salt was next over the line two and a half minutes later, but with only a 21 second advantage on the water over the lower rated Solid Air, slipped to third place after time correction.

They continued in line abreast until Star-Born 4 span around and headed back to the start, clearly worried that she had started prematurely. Despite returning immediately after her false start, Sam lost close to 90 seconds in restarting. However, she worked her way back up the fleet to take line honours and first on corrected time, 35 seconds ahead of Minx 4.

Louis Kenna’s Morris M36 Chameleon of Cowes has dominated the Club Cruiser class so far, but today approached the line too early and was forced to luff head to wind to avoid being premature, allowing Ian Smyth’s Westerly Fulmar Panda of Hamble to overtake to leeward, while Mark Attrill’s Dehler 101 Optima Aqua slowly gained a windward advantage.

Panda finished with an advantage of almost seven minutes on the higher rated Chameleon of Cowes, though Kenna was able to save his time on one of the lowest rated boats in the fleet, William Mumby’s Marieholm International Folkboat Frk Fryd, who took third place on corrected time.

Sunsail has a smaller than usual fleet of their new Jeanneau F41.0s at Cowes this year, but these boats sail with a large enough team to represent a significant number of sailors. As in previous years the top group of boats has enjoyed some very close racing and today the first five boats finished within 54 seconds of each other.

Tenzing took her first victory of the regatta, a mere 2 seconds ahead of Ophir, while Hollis 2 was third, with a slim 14 second advantage on Don’t Panik.

Racing is scheduled to conclude tomorrow, which will see a return to predominately sunny weather, but with a very strong westerly airflow.

For the full results, see: http://www.cowesweek.co.uk/web/code/php/main_c.php?map=cw21&ui=cw4&style=std&override=&section=racing&page=points2021