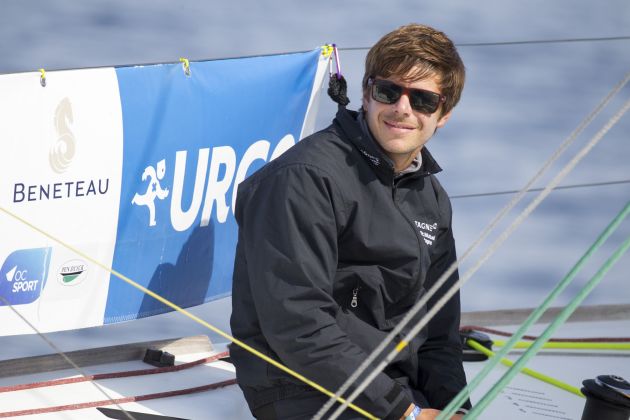 The 43 skippers of La Solitaire URGO le Figaro have spent their third day at sea since starting from Gijon on Saturday afternoon, negotiating a small virtual channel, created in between two restricted zones defined by the French navy for live missile firing exercise. The restricted zones has had a funnelling effect, limiting the solo offshore racers strategic options to one viable route – effectively forced to line up in the wake of leader Sébastien Simon – Bretagne Crédit Mutuel Performance – leader on the 15h classification who was expected to round the Chaussée de Seine turning mark – out to the west of the Point of Brittany in a few hours time.

Speaking at the mid-day radio call Simon commented “I am 45 miles from Chaussée de Sein. It does not go too badly. It's still hard to move the boat forward and it's starting to get monotonous. Since the start I’ve not had much to do. We have been on port tack for a while now, but we must not lose concentration at this stage. The wind is still northwest, we expect a shift to the northeast in the night. I hope I have passed the Chaussée de Sein in the night, at the moment I am a little slower than what the routings predicted so it may be later in the night than expected. I’m keeping a close watch on what's going on behind me, and I get constantly worried every time the fleet spreads out. The fleet has been realigned because of the forbidden zones, but now it is re-spreading.”

Approaching the Brittany coast throughout the afternoon the leading pack have been sailing on a favorable northwesterly wind shift allowing them to sail to the northern tip of the Bay of Biscay with minimal maneuvers and making the most of the favorable current.

Due to the prevailing light conditions La Solitaire Urgo Le Figaro Race Direction has made the decision to shorten the course, removing the need to round the island of Ile d’Yeu and Est des Corbeaux cardinal buoy (the turning marks to the east of Concarneau). The change to the leg, a shortening of a hundred miles making the course distance some 420 miles. With the restrictions on the military zones now lifted after live firing exercises complete the last stretch towards Belle-Ile will open up more tactical options for the final stage of the leg.

Second positioned Rookie and second place international sailor Milan Kolacek – Czeching The Edge – was holding 11th position at the 15:00hrs ranking, “I worked a lot to get into the first half, so I'm pretty good. I also had a bit of luck because the wind moved a lot the first night and it was good for me. I'm really close to TeamWork (Justine Mettraux) and ahead of Adrien (Hardy) and as it really has been soft, I really put myself on to move the boat and whenever the conditions change, I need a little time to restart the boat. I think that after the Chaussée de Sein, it will be a direct route on a reach., There will not be many opportunities to play tactics. You have to do what you can now at the Raz de Sein crossing and on the leg to Penmarch and then it's going to be a drag race.”

Sebastien Simon (Bretagne CMB Performance) leads the fleet with 170 miles to the finish, Martin Le Pape (Skipper Macif 2017) is in hot pursuit just 1 mile behind with Pierre Quiroga (Skipper Espoir CEM-CS) in 3rd at the head of the chasing pack.

Hugh Brayshaw (The Offshore Academy) continues to lead the Brits in 19th place and has positioned himself as the most westerly boat in the second bunch some 17 miles back from the leader. “Right now I have between 2 – 6kts of wind – we still have some swell in the sea which is a bit bumpy for the light wind that I have. It’s sunny and quite warm though so I am quite happy with this weather, I’m expecting the conditions to change slightly as we get closer to the land and the Brittany coastline. For this leg I have been keeping myself in the middle of the fleet, once the leaders start tacking I will start to think about it unless there is an obvious time for me to tack – its hopefully an area where I can gain some more places.”

Suffering from the light conditions and forced to tack to avoid the exclusion zones Mary Rook (Inspire+) and Alan Roberts (Seacat Services) sit further down the standings in 37th and 39th position, the conditions also proving tough for seasoned Figaro and Vendee sailors such as Yann Elies (Queguiner – Leucemie Espoir) 29th and Jeremie Beyou (Charal) 24th. Through the night the fleet will round the northwesterly mark of the course at Chausee de Sein and make their way eastward to the finish in Concarneau via the Island of Belle Ile.