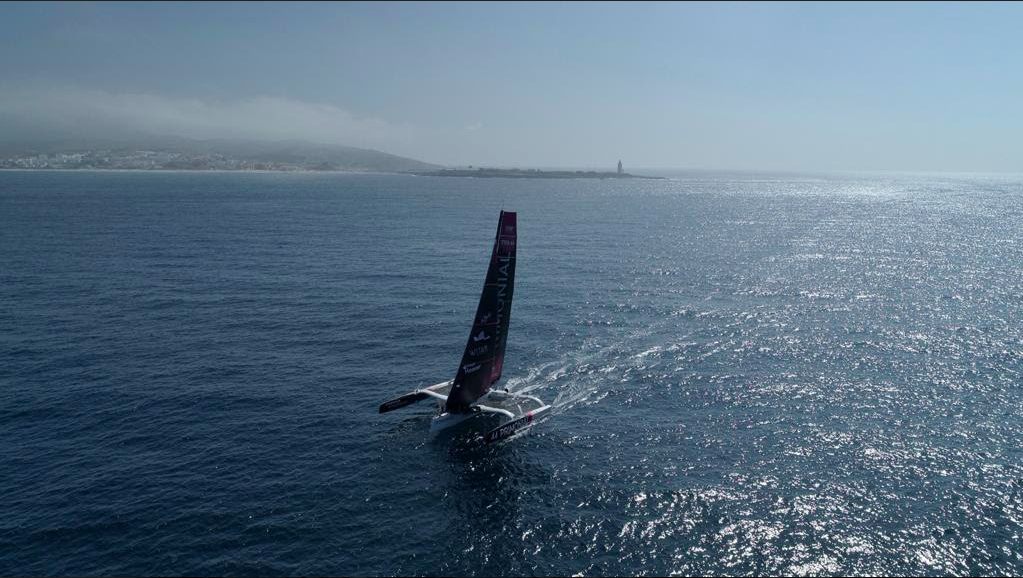 Season 2 of the Pro Sailing Tour, one of ocean racing’s most exciting new competitions, gets underway on Thursday in Bonifacio, Corsica, with two days of inshore racing on the agenda, followed by a round Corsica challenge that kicks-off on Saturday.

The fleet of seven (the eighth, Armel Tripon, will return for Episode 2) Ocean Fifty foiling trimarans will descend on one of the most beautiful locations the Mediterranean has to offer for a four-day spectacle that will give a glimpse of who might challenge the defending 2021 champions Leyton, led by Brit Sam Goodchild.

Spectators – afficionados or just the curious – will still be abuzz with the highly acclaimed and recently released Ocean Fifty documentary series, produced by Upswing Prod, co-produced by Mille et Une Productions and distributed by Sunset+Vine, which was broadcast on CANAL+SPORT just five days ago.

And now the skippers are back after a winter of optimisation with boats that are both faster and more reliable, and they are ready to do battle.

“Everyone has raised their game,” said Quentin Vlamynk, who was the 2019 Multi50 French Champion, and finished second in the first season of the Pro Sailing Tour.

“It will be particularly tough,” predicts Gilles Lamiré who won the Transat Jacques Vabre in 2019 with a Multi50.

Who will challenge defender Sam Goodchild?

The turquoise waters off Bonifacio will be the battleground for what promises to be an intense and committed effort by the fleet to oust defending champions Leyton, who won season 1 decisively in 2021 taking four out of five victories to claim the overall title.

But Leyton skipper Goodchild has not been idle this winter, his crew has been boosted with the addition of Pierre Pennec, Olympic Tornado sailor, and Devan Le Bihan, World Match Racing Tour, America’s Cup and French SailGP sailor.

His boat has been modified with a central rudder and a new mast and on his latest outing a month ago he won the 1000 miles des Sables, single-handed. His closest rivals in 2021, Quentin Vlamynck, skipper of Arkema 4, who finished second and Thibaut Vauchel-Camus, skipper of Solidaire En Peloton-ARSEP, who finished third, will also be in hot pursuit.

Sébastien Rogues, Primonial – with Solitaire du Figaro winner Pierre Quiroga among his crew – and Erwan Le Roux, Koesio, first and second respectively in the Transat Jacques Vabre, are also ones to watch. While Gilles Lamiré, Groupe GCA-1001 Sourires, who recently finished third at the Caribbean 600 off the back of setting a round-Martinique record earlier in the year, is also very motivated to make his mark.

Armel Tripon, skipper of Les P’tits Doudous, will be sitting out the season’s opening regatta following a capsize off La Coruña. He hopes to re-join the fleet in Brest for Episode 2.

Eric Peron, skippering Komilfo, is this season’s newcomer to the Pro Sailing Tour. An experienced offshore specialist – Solitaire du Figaro, Transat AG2R, Tour de France a la Voile, and Volvo Ocean Race with Dongfeng – Peron finished second on his first outing with the Ocean Fifty at the recent 1000 miles des Sables. “I am the new kid on the block. My number one objective is to learn and progress and I’m really looking forward to it. We won’t be the statistical favourites, but we’ll be doing our best!” he said.

Quotes from the sailors:

Sam Goodchild (Leyton): “The aim this season is to keep the same tempo as last year, not to give up and above all not to rest on last year’s victory. We must always try to progress to stay ahead!”

Thibaut Vauchel-Camus (Solidaire En Peloton-ARSEP): “The motivation and quality of the crews as well as the very open game of this first season herald a Season 2 with increased ambitions!”

Gilles Lamiré (Groupe GCA-1001 Sourires): ” I know I still have a lot to learn but I am approaching this second season with great enthusiasm. The level of the competition is going to be very high!”

Sébastien Rogues (Primonial): “With the reinforcement of Pierre Quiroga (trimmer, navigator) and Matthieu Salomon, we want to aim higher in the rankings and gain in regularity and consistency. If that’s the case, the ranking will speak for itself.”

Erwan Le Roux (Koesio): “We are clearly making progress. We’re clearly setting our sights higher: our aim is to get on the podium and win races.”

Quentin Vlamynck (Arkema 4): “We’re back with the same boat, the same name but new colours. Even if our competitors have also raised their game, we’re looking forward to the start line. We hope to do as well as in 2021!”

Éric Péron (Komilfo): “I am the new kid on the block. My number one objective is to learn and progress. I’m really looking forward to it. We won’t be the statistical favourites, but we’ll try to do well.”

Bonifacio, pearl of the Mediterranean

The extraordinary beauty of the setting for Episode 1 of the Pro Sailing Tour will not distract the crews of the Ocean Fifties but will provide a stunning backdrop to the action on the water. Bonifacio’s Genoese-influenced port, turquoise waters, and dramatic limestone cliffs, combined with the gentle feeling that summer has arrived, will give spectators plenty to enjoy between races.

“This inter-regional event, which is ecologically responsible and brings together high-level sailors, could only receive strong support from me and from all the people of Bonifacio,” said Jean-Charles Orsucci, Mayor of Bonifacio. “I am delighted with this partnership which will also benefit all visitors from all horizons. This can only contribute to building a sustainable nautical industry for future generations.”

An unprecedented and immersive documentary series

As the sailors get ready to race the opening regatta later this week, the Ocean Fifty documentary series produced by Upswing Prod, co-produced by Mille et Une Productions and distributed by Sunset+Vine, gives fans an unprecedented immersive onboard experience over four episodes. It is currently broadcasting every Sunday and Wednesday on CANAL+SPORT and is also available on demand on the MyCANAL platform.

For the full broadcast schedule, please go to:  https://prosailingtour.com/la-saison-1-enfin-disponible-sur-canal/