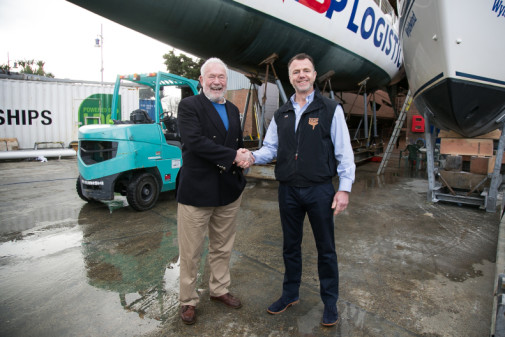 Clipper Round the World Yacht Race Chairman Sir Robin Knox-Johnston and Coppercoat Director Jayson Kenny celebrate as Coppercoat is again selected as Official Antifoul Supplier for the next two editions of the Race.

Coppercoat has just signed a contract confirming the company as the Official Antifoul Supplier for the next two editions of the Clipper Round the World Yacht Race in 2019-20 and 2021-22. This partnership both reflects and consolidates Coppercoat’s  success in the same official capacity during and after the Clipper 2017-18 Race: for the very first time since the Clipper Race began in 1996, there was no need to lift the boats out for hull cleaning at the halfway point in Sydney.

Remarkably, the antifoul’s integrity was still uncompromised when the boats were eventually lifted out at the race’s end, following 16 months of constant seawater immersion over an enormous distance of over 40,000 nautical miles. The unprecedented outcome of this accomplishment is that the existing Coppercoat on the race boat hulls will not need to be stripped off and reapplied, and will still be in place when the boats set off again in August 2019 for the start of the 2019-20 race.

“We have of course made it clear that we will touch up the coating on the race boat hulls if required, but this emphatically hasn’t been necessary as yet,” smiles Ewan Clark, Coppercoat Director. “Based on the unsullied condition of the Coppercoat on those hulls, supported by the innumerable positive testimonies we’ve accumulated over almost three decades of trading, there’s every reason to suggest that the original coating we applied in 2017 will last not only throughout the 2019-20 race, but will also see out the 2021-22 event. Its coat-and-forget properties represent their own ringing endorsement.”

Although the finer details of the Clipper 2019-20 Race route have yet to be ironed out, it is already known that the next 40,000NM odyssey will consist of eight legs including stopovers in South America, South Africa, Australia, China, USA and the UK, with Chinese stopovers in Sanya, Zhuhai and Qingdao already confirmed.

“Our confidence in Coppercoat has been rewarded,” says Sir Robin Knox-Johnston, Clipper Race Chairman. “Across the fleet of Clipper 70s, the coating withstood the rigorous conditions of a 40,000NM circumnavigation, and following the Clipper 2017-18 Race remains in near-perfect condition. As we prepare for the next race there was absolutely no question that we’d extend our association with the company.

“Due to the durability of the coating, the need for removal and replacement every year has been removed. Over the span of the partnership this will dispense with entire layers of inconvenience and expenditure.”