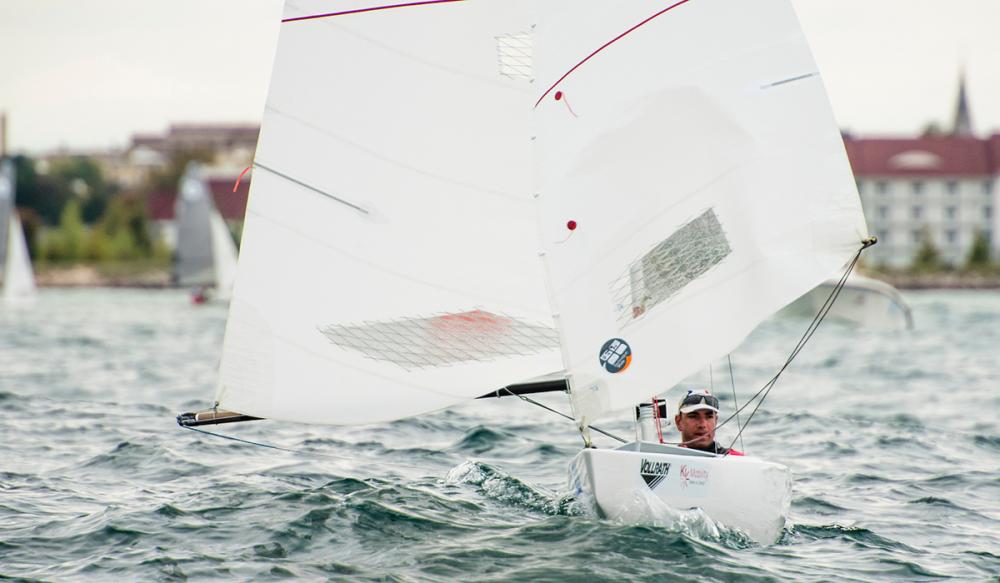 The 98 sailors from 39 nations racing at the 2019 Para World Sailing Championships in Sheboygan, Wisconsin, USA had a cool introduction to Lake Michigan as racing across the four fleets got underway.

Unseasonably warm temperatures had blessed Sheboygan in the days leading up to the Championships, but a shift in conditions meant that the opening day was held under cloudy skies, cool temperatures and a variable 5-10 knot north-easterly breeze.

Although it was cool in the air, the action was hot on the water as 27 races were completed across the 2.4 Norlin OD, Women’s Hansa 303, Men’s Hansa 303 and the RS Venture Connect.

Damien Seguin (FRA) snapped up a race win and a second in the 38-boat 2.4 Norlin OD fleet. His first victory was a commanding one, as he explained, “I was second at the first upwind but then I took the lead and got a big advantage. It was a good race for me.”

However, things could have been different in the second race, “Oof – it was amazing,” he said laughing, “Five boats were leading and after the downwind mark, one group chose the left and the others chose the right. There was no wind but it filled in on the right where I was so it was crazy. Anyone could have won.”

Seguin has been in fine form in 2018 in the 2.4 Norlin OD, winning the World Cup in Hyéres, France and the European Para Sailing Championship but recently, he’s been sailing a boat 52 feet more than the 2.4.

“I got the boat in March and I’ve done many races. I have my qualification for the next Route du Rhum in November. I have a lot to learn but I feel good in the boat. I’m really happy sailing this boat and after the Route du Rhum I’ll sail in the Vendée Globe in 2020. I’ve found a sponsor so it’s on the way – I’m happy.”

Heiko Kroger (GER) won the second race and a second in the opening race means he’s tied with Seguin. Dee Smith (USA) is third, four points off the leaders.

The RS Venture Connect made its debut in the Para World Sailing Championships and Alexandra Rickham and Hannah Stodel (GBR) had the best of the day. Rickham, a London 2012 bronze medallist, and Stodel, a multiple world champion in the Sonar, are two of the most experienced competitors in the fleet and it showed as they won four of six races in Group A.

“All in all it seemed to go alright,” said a modest Rickham. “I can’t be unhappy about today. It was quite varied and the wind was really up and down. The sea state was all over the shop as well.

“There was quite a bit of swell at the beginning but that flattened off, so lots of big wind shifts in the second half. It was quite difficult and a lot of us haven’t sailed the boat that much so it was quite a big learning curve.”

Racing in groups continues on Wednesday and the winner of each group will automatically advance to the winner-take-all race on Saturday.

The Men’s Hansa 303 are split into six groups of six sailors. On the opening day, the competitors sailed two groups at the time and completed 12 races.

After the first day of qualifying, the leaderboard is in its early stages but Jens Kroker (GER), Piotr Cichocki (POL), Ange Margaron (FRA) and Christopher Symonds (AUS) showed great form and will be medal contenders.

Just one race was possible in the Women’s Hansa 303.