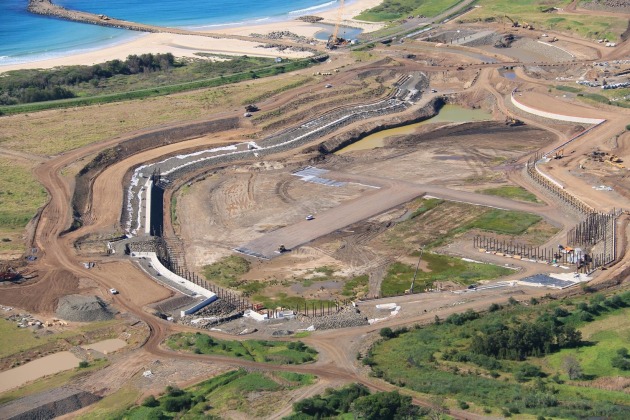 Construction of the brand new Shell Cove marina development south of Wollongong in NSW has been award to Walcon Marine.

The $15 million contract covers the construction of piling works, the supply of floating pontoon berths, a public boat ramp pontoon, a commercial vessel pontoon and a public jetty. The pontoon berthing will be installed in stages with the first 115 berths to be delivered by mid-2019, and the second and third stages of marina berths to be delivered in line with demand.

“The start of the marina construction is one of the most important milestones for this award-winning community as we move one step closer to completion,” said Shellharbour City Council Mayor Marianne Saliba. “The marina will be the jewel in Shell Cove’s crown and every resident in the region will be able to share in the wonderful amenity The Waterfront precinct will offer,”

An unusual aspect of the development, as reported in Marine Business earlier this year, is that the piling works for the new marina will take place on the dry bed of the harbour before the whole site is flooded next year. This will ensure that the works can be completed within a controlled environment. Piles will be steel tubular piles fitted with HDPE sleeves. All piles and associated sleeves will be embedded into rock and fully protected from any possible acid sulphate soil contamination.

The marina will use Walcon's System 2000 heavy-duty pontoons incorporating pre-cast concrete decks and all berths will be provided with modern power and water services through the installation of the Rolec brand Quantum service pedestals.

“The 143-berth marina Walcon Marine built for Frasers Property at its Port Coogee estate development in Western Australia achieved everyone’s objectives for a state-of-the-art marina facility and we will ensure the same outcome for Shellharbour Marina,” he said.

Walcon Marine’s senior group consultant, Ian McAndrew, has had a long involvement with the Shell Cove project having previously worked on preparing the demand study for the project some 14 years ago and with the project’s then engineering consultants on marina design issues.

“I am really delighted after all these years to see Shellharbour Marina come into being,” he said. “We are also extremely proud that Walcon Marine has been selected to play this major role and we look forward to working with Shellharbour City Council, Frasers Property and the other Shellharbour Marina contractors and professionals in bringing this prestigious development into what I know will be successful operations in 2019.”

Installation of the timber decking to the 800 metre boardwalk at the marina has also commenced with works scheduled to be completed before the end of this year.

When completed, the marina will be known as Shellharbour Marina while the harbour itself will be called Shell Cove.

While primarily aimed at filling the demand for permanent berths on the South Coast, cruisers heading north or south will be able to call in and avail themselves of the marina facilities, which will include toilets, showers, a laundry and a lounge area.

When asked about berths for the growing number of multihulls cruising the coast, Matt Youell, Director of Sustainability for Shell Harbour City Council, told Mysailing: ” We will have double berths (from 12m and up) both in the outer harbour marina and inner harbour marina. We are planning to operate the marina with a 5 to10% vacancy factor depending on demand and sister marina arrangements, which means between 15 and 30 berths are planned to be available for visitors. The harbour also has seven channel (four point FORE-AFT) moorings for vessels up to 25m-30m+, that is designed to serve itinerant use, but we also have the town wharf that can accommodate additional itinerant berthing.”

The town centre, right next to the marina, will have a foreshore tavern, cafés, restaurants, a hotel and a Woolworths supermarket. The Council plans to include BBQ's for berth holders (like the ones at Soldiers' Point marina) and offer entertainment at two on-water social lounges, similar in design to The Spit marina's on-water lounge for their berth holders and their guests.