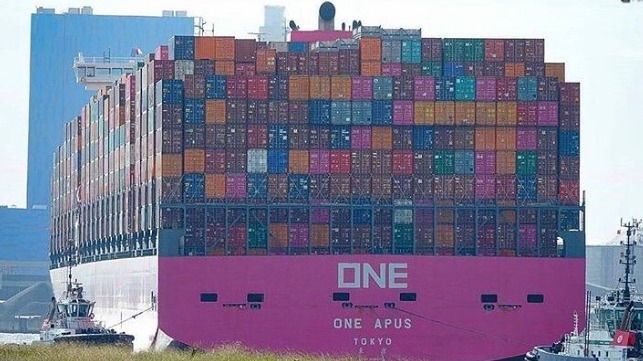 The container ship ONE Apus “suffered collapsed containers” due to rolling in severe weather conditions in the Pacific, according to commercial operator Ocean Network Express (ONE).

At the time of the casualty, the Apus was under way from Yantian to Long Beach. On Monday night, when she was about 1,600 nm northwest of Hawaii, she encountered heavy weather. Rolling heavily in the swells, she lost an unspecified number of containers into the water, according to manager NYK Shipmanagement Pte Ltd. (NYKSM).

The Apus has diverted from her course for safety. NYKSM has alerted the U.S. Coast Guard of the vessel's predicament, and it is working on finding a port of refuge to assess the damage and determine how many containers were lost. On Tuesday, her AIS signal showed her making a northeasterly course at 15 knots and broadcasting her destination as Kobe, Japan.

“A full investigation will be conducted into this incident in conjunction with the flag state and the relevant maritime authorities,” NYKSM said in a statement.

ONE said that the Apus' arrival in Long Beach will be delayed and that a schedule recovery plan is currently under way.

Container loss is an infrequent problem relative to the total volume of containerized trade, but it is of increasing interest to regulators. After the MSC Zoe lost 277 shipping containers in the North Sea in early 2019, tons of debris washed up along the northern shores of the Netherlands, including a small number of potentially hazardous packages of organic peroxides. Australia's maritime authorities have cracked down on container loss incidents over similar pollution concerns.