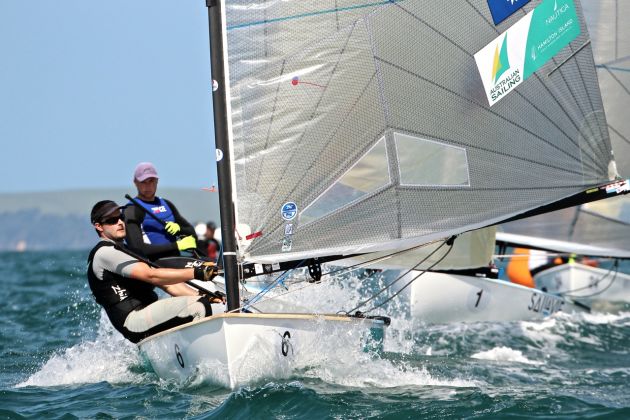 Andrew Murdoch kept the home crowd happy on the opening day of the 2015 Finn Gold Cup in Takapuna, New Zealand after winning the opening race to lead overnight. After two races, he is on equal points with defending champion Giles Scott (GBR) with Ed Wright (GBR) nine points back. The second race was won by Björn Allansson (SWE).

With a forecast of very light winds all day, the early postponement ashore was not exactly unexpected but the solid breeze that came later in the day was a pleasant surprise. Starting in 8-9 knots north-westerly, it increased to 10 knots at the first mark and peaked at around 11-12 knots in the second race to create a fantastic first day to the 2015 World Championship.

Murdoch led almost all the way in Race 1, sailing conservatively, while those who took a more risky course on the edges came unstuck. He rounded the top mark from Michele Paoletti (ITA), Wright, Caleb Paine (USA) and Ioannis Mitakis (GRE). Alejandro Foglia (URU) had moved up to second from the gate and briefly took the lead on the second upwind. However, Murdoch got the final approach right to round first and lead down to the finish. New IFA Vice President, Foglia, kept his nerve down the lighter final run to cross second with Mitakis third.

The second race followed a similar pattern in slightly more breeze with Allansson breaking away from the pack after rounding the top mark in first to build a substantial lead downwind and on the next upwind to take a comfortable win. Jake Lilley (AUS) occupied second place throughout the race as did Anders Pedersen (NOR) in third.

Defending champion Scott said of his day. “It was a good day. We had 12 knots by the second race which was pretty unexpected. It was quite nice to get out after an hour's delay and get some good races in.”

On his tactics for the day. “I think looking back on the season it's quite a big shock to be racing in such a large fleet again. There is a huge amount of leverage out there from left to right especially when you throw in conditions like we had early today with huge shifts, so it just opens up scope for big gains and huge losses. So I think you have to try and be as consistent with that as you can and a lot of people struggled with that. I think the winner will be the person who deals with that best.”

He has already qualified for Rio, so does that lesson the pressure in him? “I wouldn't say I feel less pressure. It's been an odd season because we've had a double peak with the test event and here. But I am motivated to come here to defend my title and that's what I am focussing on.”

On the changing conditions, “I think we are all going to have to be really open to anything. I think at the moment the forecast looks reasonably light but I know a lot of the models don't agree with each other.”

Race two winner Allansson said, “The second race went really well. I had a good start and had good speed so could go the way I wanted. I was actually able to lead from the first mark onwards and take the bullet. The first race was not especially good. I was struggling the whole race and made some mistakes, so that was a hard race.”

On Takapuna, “You know, it's been giving us a little bit of everything. When we got here it was shorts and tank tops and we thought this is great, it's just like Australia. Then we had a week of hailing rain and really, knarly weather and now we are back to glamorous sailing weather.”

On his Olympic selection trials against Max Salminen. “I am focusing on beating as many as I possibly can this week, not just Max. Hopefully it's going to be a whole bunch of people.”

Murdoch was pretty happy with his day, now leading the Finn world championship in home waters against the best in the world. “I had a pretty solid day and it's pretty nice to be sailing on home waters. I like the pressure of sailing in big fleets and we've had a few foreigners here for a while now. It's cool to be training here in New Zealand with the level of the Finn Class. So I'm loving it.”

“Winning the first race was pretty special. I worked my way up the middle and getting near the top of the first beat I was working out I might be leading, which was pretty cool and to win the first race here is good to do for the home crowd and all the supporters, and good starter on a good day.”

On tactical issues, “There's a bit of current and the channel is on the right hand side of the course , and if you went too far left the pressure was dropping out as well. So it was hard one to get right. I sort of probably just did it a little bit better than anyone else, but it certainly didn't feel like I was all over it. The sea state that came with it also made it hard work upwind. You wanted to get fully hiking but then you had to sit in now and then, so it was quite uncomfortable. You couldn't really stretch your legs too much. But we had a few of the downwind legs which were free pumping when the breeze dropped out a bit so I'll sleep well tonight.”

Report from Cora Zillich at the AST:

Oliver Tweddell (VIC) had a consistent day posting a 17th and 12th, which put him in overall tenth in the 76 boat fleet. Jake Lilley (QLD) struggled in the first race, resulting in a 56th but made up for it in race two by coming second. This puts him into overall 34th after the first two races.

“I started off today trying to get two consistent races in as it will be a tricky week,” Oliver Tweddell said. “It was really key that I get two solid scores and I managed to do that. I’m happy with today and pleased to get away with two good solid scores on the board and looking forward to another two races tomorrow.”

Australia secured country qualification for the Finn class for Rio 2016 at last year’s ISAF Sailing World Championships in Santander, Spain. But who will be representing Australia in the class is yet to be decided.

With selection still ongoing the Finn World Cup will be an important event for the current World #2 Jake Lilley and World #6 Oliver Tweddell.

Jake Lilley has only been in the class just under two years but, although still a junior, he has been making his mark at the top with a steady series of good results. He represented Australia at the 2015 Rio Test event in August, where he finished sixth, after qualifying Australia in Santander. But Oliver Tweddell is ready to chase his teammate, which will make for a good battle this week.

After three days of Qualifying series, Ashley Stoddart qualified for the top-50 Gold fleet ranked 35th overall. Those placed 51-100 will race in the Silver fleet, which will include former Australian Sailing Team’s Krystal Weir (VIC) who finished 84th after three days of racing.

“I am currently sitting 35th overall and so far the racing has had its ups and downs,” Ashley Stoddart said. “I'm looking to take the lessons and positives from the past three days of qualifying series into the Gold fleet racing.”

“This is now the half way point of the regatta, and what follows is the business end where every point counts. With six races still remaining there are many opportunities there and after the rest day the batteries are charged for more action out on the water!”

Racing continues today, Tuesday 24 November with a start time for the first two Final Races scheduled for 1200 local time (AEDT 19:00). The event comprises six days of racing with two back to back races each day.

Australian Sailing Squad’s Ashley Stoddart (QLD) as well as former Australian Sailing Team sailor and London Olympian Krystal Weir are contesting the event, which also provides the opportunity for Australia to secure country qualification in the Laser Radial for the 2016 Rio Olympic Games. The final chance to qualify the boat class for Australia will be at the ISAF Sailing World Cup in Melbourne mid-December.