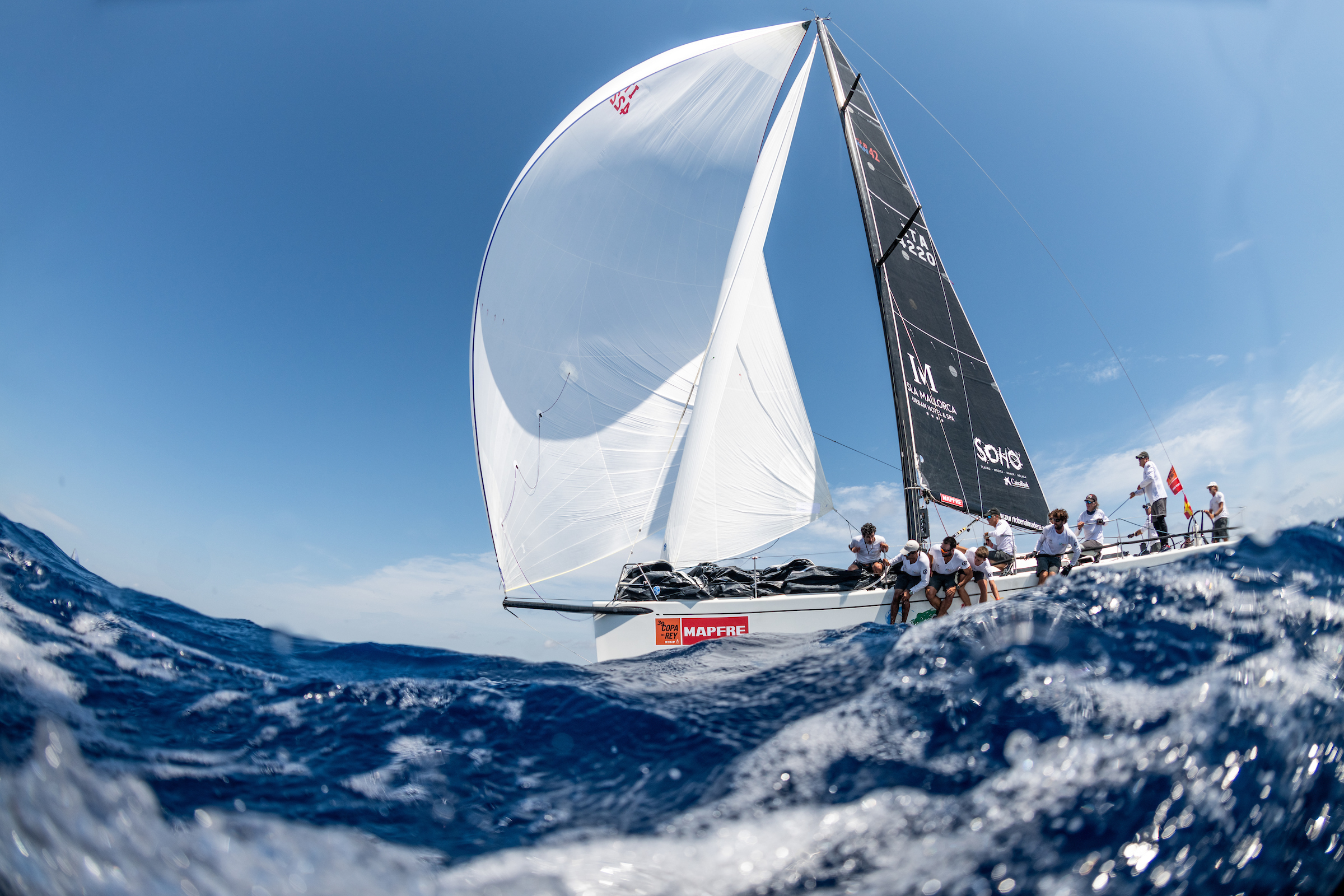 In the ClubSwan 50 division at the 39 Copa del Rey MAPFRE, Marcus Brennecke’s Hatari has consistently stayed in the top four for the first six races and have built a sizeable 19-point margin over the second placed Bronenosec 50.

But under the controversial Preliminary and Finals format, Hatari is now only 1-point ahead of Bronenosec 50.

Hatari, the current ClubSwan 50 World Champions have a strong, star studded line up led by Marcus Wieser. Their speed, slick crew work and good results have them mapped out as the favourites to win in a class which is proving notoriously hard to retain a level of regular results.

While Hatari have managed themselves well so far, the Bronenosec 50 crew produced a 12 and 1 today. Ulika came 14th in the second race on day three of racing, pushing them back on the leaderboard.

While the ClubSwan remains a heady mix of seasoned professionals, Olympic medallists, America’s Cup and Volvo Ocean Race winners, there are also some less-experienced sailors producing some impressive results.

Twenty-five years old Polina Lyubomirova (RUS) is steering Bronenosec 50 for all of this season and aspires to steer her father’s TP52 in the future.

Lyubomirova is being guided by tactician Vasco Vascotto, “I have been on the Swan 60 before and the RC44 doing different jobs but this is my first season steering. Before I was doing everything like braiding the spinnakers and the runners. I want to believe that my steering is getting better and it is reflected in where you are in the fleet. If you are doing it well then you can be somewhere up the front of the fleet, if you are not steering well because you have something else on your mind then you are behind.

“It is key but the guys have to perform well too. This is my first time sailing with Vasco and it is amazing. He is a great teacher, very wise but with a lot of emotion which he uses well. I think that brings up a good result, there is an excitement with very precise targets. It is impressive, not many tacticians are like this.”

Vascotto is loving life back in the grand prix fleets after two and a half years on America’s Cup duty with Luna Rossa-Prada Pirelli. Reflecting on their 14,1 today Vascotto said, “We are very much in the learning process as a crew. It is obvious that sometimes you will have some bad moments, and for me it is not easy as I have not, of course, been sailing for two and a half years.

“Yes I have watched a lot of America’s Cup boats foiling around the sea but I have not actually been sailing really and so it is great to be back doing what I love. I am so lucky. I have missed this, this is a good life and I am so lucky to have this programme with this 50 and the TP52.”

And in third place is Sonke Meier-Sawatzki’s Niramo, with 30-year-old, first time navigator Lena Weisskichel on board. The former Laser Radial and 49erFX racer, who was well into a double handed offshore programme before the IOC decided otherwise, is on a steep learning curve but has seized this opportunity with both hands and is doing an excellent job.

Weisskichel said, “You have to have a lot of self confidence and say what you think. It is going great. I had a lot of help and knowledge from the old navigator who was here on the training days, Marcel Korte, and that was great. It is such a steep learning curve but the team are quite patient when I make small mistakes when you are still learning.

“But it is so cool to be learning from guys like this is this kind of environment. I am not coming from big teams. We came second in the first race yesterday and that felt great because there are so many more people cheering that when you are on your own or in a skiff.”

Andy Soriano’s Alegre have a decent lead in the hotly contested IRC class. But they had some stiff competition in race two, taking the win from Gerard Logel’s Arobas by just one second.

Nic Asher, crew member of Alegre said, “It was shifty and puffy and that made both of today’s races quite difficult. The wind dropped and then filled in on the last run and the guys caught us up a little bit and in the end, as you will see, it was quite close, we won that last one by just one second and it was four seconds to third.

“This regatta has been really good for everyone, all the TP52s, we are having good racing and it is nice for the others to be able to get a bit of a benchmark where they all are. It has been good racing.

“We enjoy this regatta a lot, it is Palma after all and there is sun, wind, a great city and great racing. We are still undecided about the format. It is tough if anything goes wrong now as it really penalises you with no discards. But this is what we sign up to.”

In the ClubSwan 36 fleet the Gold Cup winners G Spot remain at the top of the leaderboard with two second places.

At the midpoint of the BMW ORC Class 1 regatta King Felipe of Spain is nicely positioned in second place on the original 2005 TP52 Aifos 500, putting them one point behind the Swan 45 From Now On.

Aifos’ Alberto Barovier said, “We did very well considering in the first race we did a very bad start and so we had to work hard to recover and in the end we did better than we expected with fifth which was a good result considering where we started out and then in the second race we were second and so we are second overall.

“The boat is much the same as in the beginning has not had much done to it, the hull has been refreshed and there are some new sails, but the difficulty is that the mast and the rig and the sails are not like the new boats’ ones and so we have to sail accordingly. But now have found a good balance and it is going well.”