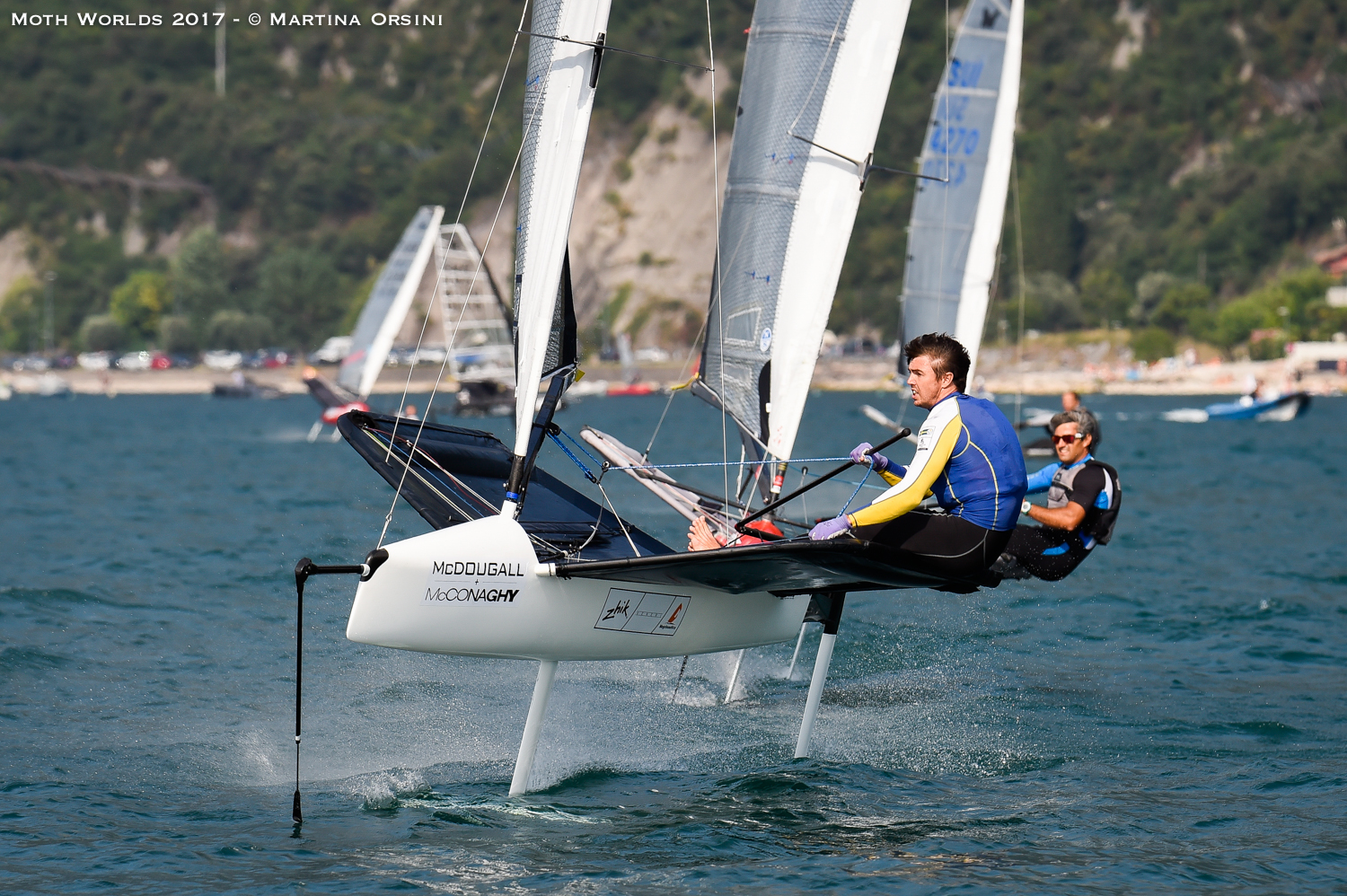 The final series of racing at the 2017 McDougall + McConaghy Moth Worlds got underway today in glamorous conditions on Lake Garda with the Gold, Silver and Bronze fleets were released just after lunchtime for four races each on two race courses.

The Gold fleet left shore about 1400hrs to sail on the South course in warm sunshine and a 12 – 14 knots breeze from 200 degrees. The two lap courses were short and sharp taking the lead boat about 25 minutes to complete.

Seventy Seven boats shot off the start line on starboard tack to tack directly in front of the Fraglia Vela Malcesine club house, where spectators were able to get a bird's eye view from the shore.

Goodison hugged the breeze on the shoreline to finish with another gun, followed by Babbage in second, having a much better day after all his breakages. Greenhalgh completed the podium, Burling just squeezed past Outteridge on the last gybe for the finish.

For race 2, the course was stretched out to 1.3nm as the breeze swung to 210 degrees. The second start was another packed line and again several competitors got squeezed out including Rob Greenhalgh and Josh McKnight (AUS). Pete Burling rounded in the lead closely followed by Tom Slingsby (AUS) with Scott Babbage in third, Paul Goodison in fifth.

It was getting late in the afternoon by the time race 3 begun, but conditions remained similar, with 12 – 14 knots of breeze and flat water but it had become more patchy with streaks down the middle of the course rather than along the Eastern lake shore.

Again Paul Goodison tussled for the lead, this time against Nathan Outteridge and Iain ‘Goobs’ Jensen. Disaster for Rob Greenhalgh as he suffered a broken mainsheet strop and had to retire. Positions stayed the same for the top three but a Corinthian sailor, Dave Hivey (GBR), sneaked into fourth to break up the professionals. Pete Burling finished this one in fifth.

The lead contenders all piled down to the pin end for the start of race 4. Nathan Outteridge again nailed it with Tom Slingsby on his hip. Burling, Goodison and Babbage were all in the scrum but Rob Greenhalgh’s timing was just out forcing him wide to duck round to start behind the pack.

It was another mad dash to the shore to tack in front of the club house. Burling and Goodison met on opposite tacks at the top mark and it was Burling who ducked Goody to round just in the lead. Outteridge rounded third. The packed rounding forced a couple of leaders to go wide of the upwind gate.

Downwind the race became a three way battle between the three former world champions, Burling, Goodison and Outteridge. On the last leg, positions changed, Babbage came to the line on opposite tacks to Outteridge and just managed to cross his bow to take his first win of the championship, both sailors enjoying a much better day on the water. Goodison took third and Burling fourth and Slingsby fifth.

When the finals series results were added to the Qualification results the overall classification, Paul Goodison was in the lead on 8 points from arch rival Laser gold medallist Tom Slingsby on 17 points and Iain Jensen moving up to third on 21 points.

After finishing 15th in the Qualification series, Pete Burling has a much better day to pull up to fourth whilst Rob Greenhalgh as a day to forget discarding a DNF and counting a 17th.

Both Nathan Outteridge and Scott Babbage are back in the top ten after their breakdowns in the Qualification series. Another top contender, Ben ‘the Patonator’ Paton (GBR), suffered a re-reoccurrence of his arm injury forcing him out of the last two races.

In the Silver fleet, John Clifton (GBR) port tacked the entire fleet to win race 1 of the day by a country mile. He repeated in race 2 and scored a 7 and 4 to open a big lead over second placed David Holenweg (SUI) and Philipp Buhl (GER).

In the Bronze fleet, Hans Rasmussen (DEN) has a huge lead over Maximilian Mage (GER) and David Simmonds (GBR).

Weary sailors returned ashore early in the evening for a ‘Bruschetta and Ravioli’ spread as the sun set over the lake; the perfect ending to a perfect day.

Racing continues for all fleets tomorrow, (Saturday). The earliest start time will be 1300hrs (local time).