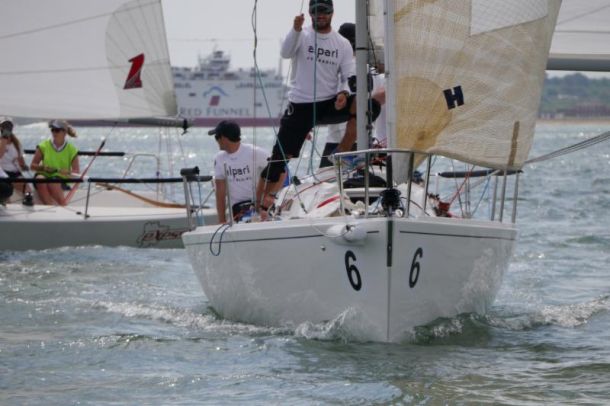 Overall victory in the Alpari World Match Racing Tour may be beyond their grasp, but there are a few hot teams with a serious prospect of winning the Monsoon Cup in Malaysia this week.

Top of this list is Phil Robertson and WAKA Racing from New Zealand, the defending champions from the previous Monsoon Cup, when the Kiwi skipper swept aside Taylor Canfield in the Semi-Finals before dispatching Ian Williams in the Finals. However, that was in a different venue, Terengganu, whereas this year’s waters in Johor are new to Phil and most of his big rivals.

Robertson remains confident nevertheless: “I really don't think much will change. To defend our title is the only thing we are focusing on. We really like the Foundation 36s and have had a really good record in them. I like how they are set up and they really suit our team and how we sail. We are really focused on the getting the boat around the course cleanly. I have personally loved sailing the Foundations so hopefully that will play into our hands a little.”

David Gilmour is near the end of his first full season on the Tour, and has already racked up a 3rd place finish at the Dutch Match Cup last September. He has also raced near Johor and is preparing himself for hot and changeable conditions in the Strait of Singapore. He is desperate for a better performance than his last time at the Monsoon Cup. “Last year I got sick which really didn’t help. I think this year we will definitely be able to do better. We haven’t been match racing since Bermuda so it might take a little time to get back into it, but I’m really excited to see how we go this year. It’s going to be a tough event, although I think our strength as a team is that we are all able to take the racing seriously, but when it is over, we are very good at switching off and relaxing.”

Two local teams won the Qualifier spots, Team Red Dot skippered by Maxi Soh from Singapore, and 1 Malaysia skippered by Jeremy Koo. Soh has been getting some top tips from France’s top match racing talent, Mathieu Richard who is racing here this week with LunaJets. Soh is one of the up and coming talents in this part of the world. “The past year has been fantastic for myself and Team Red Dot, winning the Thailand Nationals, the Chicago Match Race Center’s Summer Invitationals, the 2014 Asian Games, and Monsoon Cup Terengganu. I think for the team, the biggest result has to be Monsoon Cup Terengganu, and qualifying for the Monsoon Cup Malaysia, as it has been our dream to do an event on the Tour.

“Personally I am most looking forward to racing against Taylor Canfield, just because he is ISAF Ranked #1, defending World Champion and previous Monsoon Cup Winner. We are also looking forward to racing Mathieu Richard, because he helped us quite a bit when we went to France last July in preparation for the Asian Games. We'd like to put a couple of points on the scoreboard first, and hopefully make the knockouts.”

Jeremy Koo is targeting at least three wins in this, his seventh Monsoon Cup, although like the overseas visitors he is not familiar with the waters. “This will be our first time racing in Johor. It will very likely be light wind conditions with extremely strong current. It might get a bit choppy, maybe even a little swells and waves.” His strong point compared with previous seasons will be his consistency of crew. “The past year, I have had pretty much the same crew all throughout, so we have established a good relationship and understanding with one another. That should help us in Johor.”

Of the three Wild Card entries, Eric Monnin’s Swiss Match Racing Team should be the most comfortable in light winds. It is his first time at the Monsoon Cup, but Monnin will be drawing on the same giant-killing skills that led him to the final of the Argo Group Gold Cup.

The team that beat Monnin in Bermuda last October was Johnie Berntsson’s Stena Sailing Team from Sweden, another Wild Card entry in Johor. A third-place finisher on the Tour in 2011, Berntsson hasn’t done much match racing in the past few months, although he’s hoping the Tour Card holders might get a big distracted and give him some breaks on the race course. “I think that when eight of the other teams will be busy trying to beat each other and having the pressure building up, and making strategies to reach as high as possible for the overall results, It might open up some possibilities for us to get through and hopefully end up somewhere at the top.”

The third Wild Card entry is Pierre-Antoine Morvan and his Vannes Agglo Sailing Team from France, a former Tour Card holder and well capable of beating any of the other 11 world-class crews gathered here for the racing, which begins on Tuesday with Qualifying and runs through to Saturday when the Final will be held 1500-1700 local time (UTC +8).