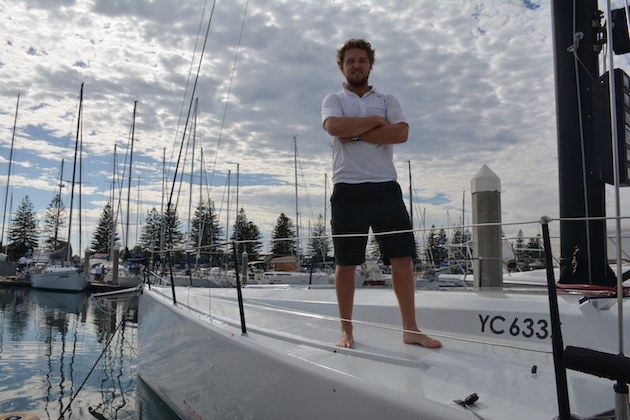 Many yachties say sailing is in their blood, but in the South Australian offshore racing scene, there is one particular person who has the right to state the claim. Adam “Rat” Common, who mans the bow on Adelaide-based TP-52 Secret Men's Business, will this year compete in his 17th consecutive Club Marine/Lexus Adelaide to Port Lincoln Yacht Race – however the most impressive thing is that he is only 26 years old.

Common was introduced to offshore racing when he competed in the race to Port Lincoln for the first time at the age of 10, racing in the cruising division with his parents Jeff and Sylvia on the family-owned Pion 30. He continued racing with his parents and did about five races with them until he got involved in the Secret Men's Business program, which he has been a part of ever since.

Common said he had noticed a lot of changes over the last 17 years of the race and he had also enjoyed the experience of learning new things each and every year.

“With my parents it was quite a long race it seemed, but on the big boat now it's barely even an overnight race, it's pretty quick,” he said. “We just did the cruising division and I probably didn't do anything, but I was there. I did four or five races with my parents and have been on Secret Men's Business since then.”

Common said the boat's owner Geoff Boettcher was someone he really enjoyed sailing with and was looking forward to getting on the water with him for yet another Adelaide to Port Lincoln campaign.

“Geoff is getting a bit old but he's still up there as one of the best in the fleet,” he said. “I've always loved sailing with him, I always will, he's a really good steerer and a lot of fun.”

As well as the race over from Adelaide, Common will once again compete in the Club Marine/Lexus Lincoln Week regatta, which runs for four days on Boston Bay from the Monday through to the Thursday the week after the race.

Common said Lincoln Week created a “mixed vibe” that was different to many other regattas he had sailed and was one of the highlights of the yachting calendar each year.

He said there was quality racing, enjoyable banter and plenty of bar talk at the event, which created a very infectious and enjoyable atmosphere for all the competitors.

After 17 years of competing, Common said the Adelaide to Port Lincoln had become a part of his life and that he intended to compete in it for many years to come.

For more information about Lincoln Week visit the website at www.lincolnweek.com.au