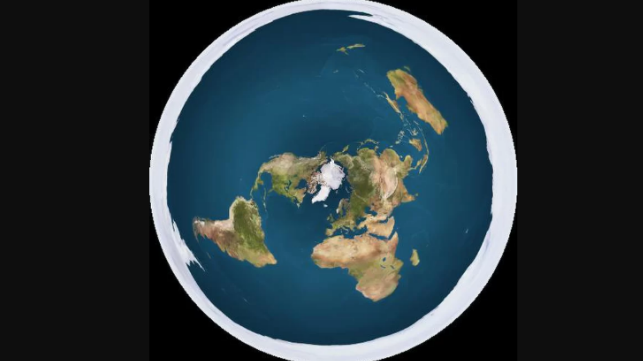 The “flat earth” movement seeks to convince the public that the world is not round, and many of its adherents attend the annual Flat Earth International Conference to discuss their beliefs. Next year, organizers want to take the gathering to a very flat place indeed: The sea. In what promises to be its “biggest, boldest, best adventure yet,” conference organizer Kryptoz Media is planning a Flat Earth Cruise in 2020.

Details of the voyage are pending, but an image used for its promotion (below) appears to be adapted directly from a Royal Caribbean advertisement for the Harmony of the Seas, one of the world's largest cruise vessels.

Flat-earth believers generally hold that the earth is a disc, with the Arctic ice cap at the center and Antarctica (an “ice wall barrier”) stretched around the perimeter. This makes it impossible to circumnavigate Antarctica, since this view suggests that it is not a continent, but it prevents the oceans from draining off the sides. In general, flat-earth believers dismiss photographs of the earth from space as a form of doctored propaganda: the conference's organizers “believe government space agencies are taking creative liberties with your tax dollars and producing misleading materials.”

Life at sea could challenge the beliefs of flat-earthers. At sea, a large vessel's deckhouse will appear on the horizon before its hull is visible (“hull-down”), since the hull is still obscured by the earth's curvature. On the bridge, navigators use nautical charts that are based on a specific projection of the earth's curved surface. They may also use celestial navigation, which is dependent upon precise knowledge of the earth's rotation and the relative positions of celestial bodies. And they will always use GPS, which relies on a constellation of more than two dozen satellites circling the globe.

For this last phenomenon, many flat-earthers have an explanation: in their view, GPS signals come from a network of tower- or balloon-mounted transmitters. Others suggest that GPS is simply a hoax, and navigators are actually relying upon LORAN.

Then again, some of them seem confused…