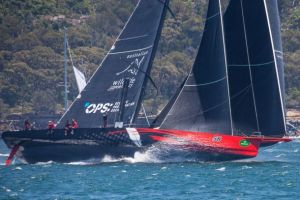 Comanche, the super maxi deemed the most likely to dethrone Wild Oats XI in this year’s Rolex Sydney Hobart Yacht Race, arrives in Sydney at the start of December with a surprise up its sleeve.

Both Comanche and the other major US challenger, George David’s 88-foor Rambler, have left Italy aboard ships, bound for Sydney and the Cruising Yacht Club of Australia’s blue water classic.

Comanche skipper Ken Read revealed today that, after ceding line honours in last year’s race to Wild Oats XI by just 49 minutes, Comanche will sail this year with 20 per cent fewer crew. Where the crew for last year’s first outing numbered 24, this year it will be just 19 or 20. That means she should be at least 500 kg lighter.

“We’ve learned how to sail her with fewer people,” Read said.

Fewer people means less bodyweight, less displacement. That should mean less drag through the water and faster boat speed. Handling that speed will be members of the same crew from last year, including America’s Cup winning skipper James Spithill, who has not raced on Comanche since.

Her record since the 2014 Hobart has been impeccable. This year, in winning line honours in the Transatlantic Race from Newport to the Lizard, Comanche set a new 24-hour sailing record for a monohull, 618.01 nautical miles, which is an average of more than 25 knots. That record distance is just short of the length of the Cruising Yacht Club of Australia’s course for the Hobart race.

Are we looking at a Hobart finish the day after the start? Is this why Wild Oats XI has to undergo major surgery fore and aft to be competitive?

“If we have 10 hours of light winds and head-on seas we would lose again,” Read says. In other words, he feels they sailed to their best last year and were not holding back because it was a brand new boat. But this year there will be fewer crew.

Comanche is designed by VPLP-Verdier, the French naval architects best known for their IMOCA (International Monohull Open Class Association) 60 designs. In reality, Comanche is a scaled-up version of the Open 60s that are seen in major solo and double-handed races such as the Vendee Globe. Hence, the aircraft carrier proportions of her transom.

What should not be forgotten is that when owners Dr Jim Clark and wife Kristy Hinze Clark collaborated with Read and VPLP-Verdier to produce this radical racing machine, top of the list for them was line honours in the Rolex Sydney Hobart. It is their holy grail.

Since last year’s 49-minute loss to Wild Oats XI, Comanche has taken the fastest time in the three major races on her agenda: the 185 nm Stamford to Block Island Race in the US; the 2800 nm Transatlantic Race; the Rolex Fastnet Race.

In the latter two she beat George David’s new 88-foot Rambler. Like Wild Oats XI, Rambler has a side foil able to be deployed to leeward when off the wind helping to keep the bow out of the water.

“I don't think we could have a better group,” Rambler’s Mick Harvey says.

Both Read and Harvey believe that, while her current surgery to top and tail the hull may be risky, Wild Oats XI will still be the competition.

“They are a smart team and know their strengths and weaknesses, and I'm sure this will give Oats another dimension against the newer boats she may not have had before,” Harvey says.

There are 110 entries in this year’s race, including an all-time record 28 international yachts.

The Rolex Sydney Hobart Yacht Race starts on Boxing Day, December 26 at 1pm AEDT and will be broadcast live on the Seven Network throughout Australia, webcast live to a global audience on Yahoo!7 and live streamed via mobile.