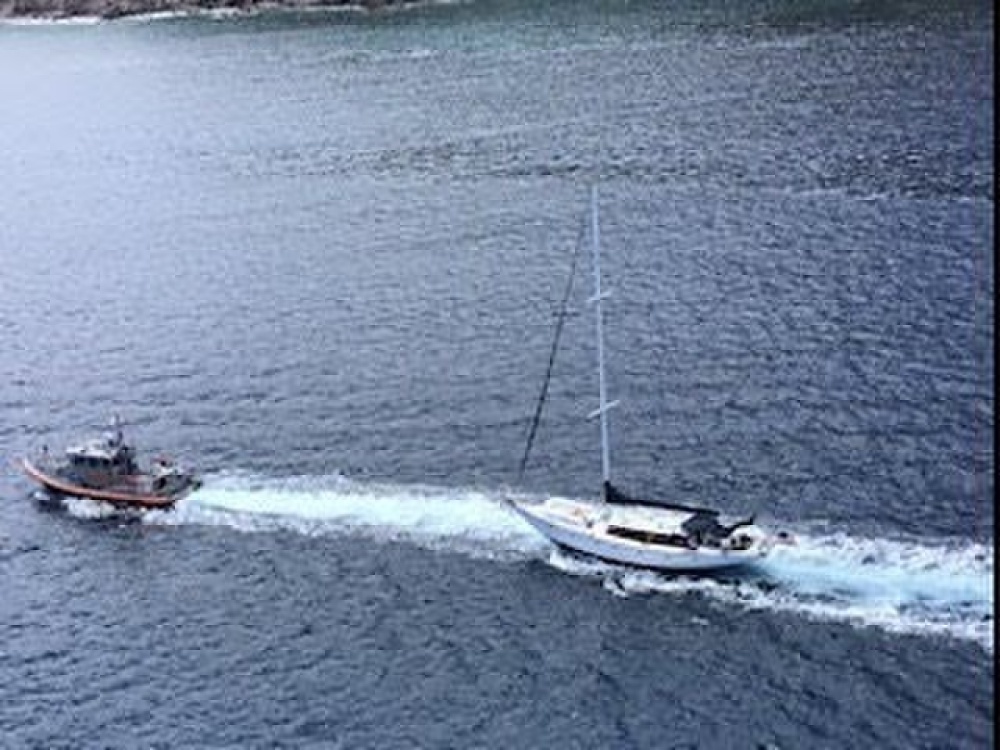 A Coast Guard vessel tows the 54ft yacht back to port after an explosion on board. Photo US Coast Guard.

The US Coast Guard in California had a busy few days!

SAN PEDRO, Calif. — The Coast Guard and partner agencies responded to a report of an explosion aboard a vessel near Avalon Saturday.

At approximately 10:55 a.m., Coast Guard Sector Los Angeles-Long Beach watchstanders received a call via channel 16 alerting them to a reported explosion aboard a 54-foot sailboat and that two people were aboard the vessel.

The Coast Guard RB-M towed the vessel back to Avalon.

The cause of the explosion is under investigation by the Los Angeles County Sheriffs Department Arson division.

There have been no reports of environmental damage or pollution as a result of the incident.

ALAMEDA, Calif. — The Coast Guard rescued two people from their sailboat after it began taking on water near Richmond, Saturday.

Coast Guard Sector San Francisco command center watchstanders received a notification at 1:31 p.m. from the operator aboard a 16-foot sailboat reporting that the boat had begun taking on water south of the Richmond-San Rafael Bridge.

Watchstanders directed the launch of a Coast Guard Station San Francisco 45-foot Response Boat-Medium boat crew at 1:38 p.m. The boat crew arrived on scene at 2:01 p.m. and rescued both people from the sailboat.

The individuals were brought to Richmond Marina with no reported medical concerns.

“This case was able to be resolved quickly due to good communication between the mariners and our watchstanders,” said Cmdr. Tim List, the Sector San Francisco search and rescue mission coordinator. “The Coast Guard recommends all boaters have a VHF radio that can tune to channel 16. Additionally, we recommend a fully charged cell phone as a backup in the event of an emergency on the water.”

The owner was assisted by a fellow boater with the removal of his sailboat from the water.