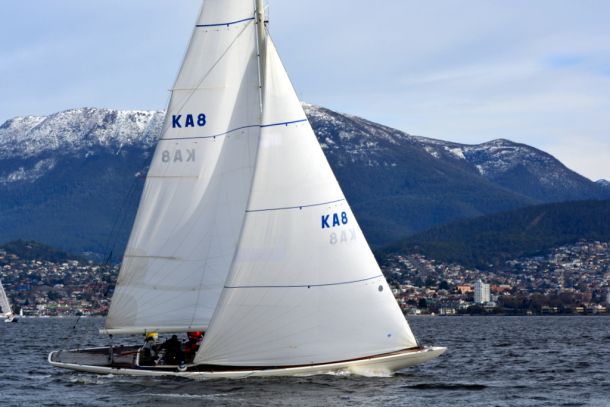 With snow-capped Mount Wellington as a backdrop, the fleet in the Bellerive Yacht Club/Tilford Auto Group Winter Series today enjoyed the closest racing of the winter, both in boat-for-boat racing and in handicap results.

The outcome, with just one race to complete the Winter Series, is tied pointscores in Divisions 1 and 3. The final race is scheduled for 30 August.

BYC has been fortunate that it has been able to run all four races to date whereas the Royal Yacht Club of Tasmania and the Derwent Sailing Squadron have each lost a day because of bad weather with Derwent lashed by gales the previous two Sundays.

Division 1 came down to a virtual match race between the two Mumm 36s, Jeff Cordell’s Host Plus and Ian Stewart’s Tas Paints, as they sailed tack for tack and gybe for gybe around the course.

After 94 minutes of racing Host Plus beat Tas Paints across the finish line by a mere 11 seconds.

On corrected time, Division 1 went to the classic International Eight Metre class yacht Juana, with Jock Young on the helm, by a margin of 5 seconds from Gary Cripps’ Sydney 39 Ciao Baby II. Host Plus placed third, with Tas Paints sixth.

After four races in the Winter Series, Juana and Planet X (Mick Rowley) are equal in standings with a net 7 points, with Tas Paints on 8 points.

Ragtime (Tom Kirkland) took second points and Kama (Don Cushion) third points. They are now on equal standings in the Winter Series pointscore, both with 8 points, with N-Yacht (P Wilkinson/G Frame) on 9 points.

Dave Willans steered Trouble to its second consecutive handicap win in the Division 2, also taking fastest time, and now has a comfortable lead in the pointscore with a net 5.5 points.

Second overall after four races is Pyxis (Chris Hadrill) on a net 11 points, while sharing third in standings place overall on 12 points are Footloose (Stewart Geeves) and Just in Time (Mick Sheehan). Half a point back, on 12.5 points, is Twitch (Twitch Syndicate).

In today’s Division 2 race, Trouble won on corrected time by 5 seconds from Twitch with another 13 seconds to Footloose.