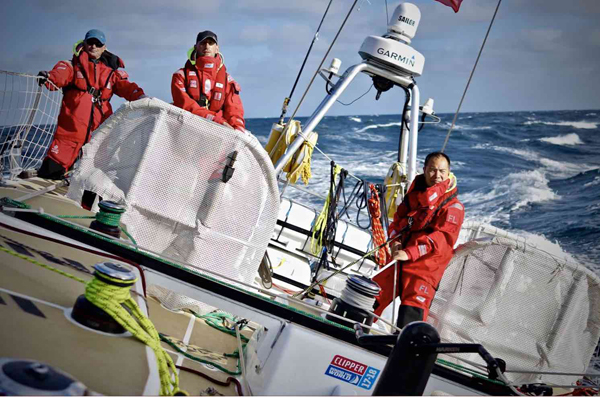 The last 24 hours has brought about a dramatic change for the Clipper Race fleet as it experiences the true conditions of the Southern Ocean for the first time on Race 3: The Dell Latitude Rugged Race.

Sanya Serenity Coast remains at the top of the leader board and has a 74 nautical mile advantage over the second placed PSP Logistics. Sanya Serenity Coast Skipper Wendy Tuck reports: “The predicted wind came in and is still here. It wouldn’t be too bad except where it’s coming from. It is making it hard to get to where we would like to be.

“Seriously, it’s wild up on deck, but the crew are in control. We are sailing, we are at the mercy of the elements, and I love it.”

Whilst Sanya Serenity Coast has deviated south, PSP Logistics has remained close to the rhumbline and as a result, remains in second place. It has been trying night for the team, as Skipper Matt Mitchell explains: “We have just had a busy couple of hours dealing with a couple of snapped reefing lines which meant taking our mainsail down in the middle of the night when the wind was up at around 40 knots. The guys did a great job and as I write we are now back up and running.”

Unicef is following a similar line to PSP Logistics and has jumped from sixth to third in the last 24 hours. Visit Seattle and Dare To Lead are close behind in fourth and fifth respectively, and Visit Seattle Skipper Nikki Henderson says: “So far the Southern Ocean has not disappointed; it's been a rough and windy night. After a game of chess in wind holes and shifts yesterday, the wind begun to build in the afternoon, naturally in the worst direction possible, and we have been sailing along with a variety of different sail sets. In fact, we have used nine out of our eleven sails in the last 24 hours.

Nikki adds: “It's been fun racing cat and mouse with Dale and the Dare To Lead gang. Unfortunately, they have begun to pull away in the last four hours, holding more sail than us. With almost an entire watch making close friends with the green monster, I think we will have to let him have this battle…for now.”

Garmin has dropped from fourth to sixth overnight but has opened a gap of 35 nautical miles on the seventh placed Liverpool 2018, who has taken a southern route with the ninth placed GREAT Britain and eleventh placed Qingdao. Liverpool 2018 Skipper Lance Shepherd comments: “We are well and truly out of the wind hole and experiencing the conditions we expected from the Dell Latitude Rugged Race. As we charge along upwind, we are back in Clipper Race life at 45 degrees.”

Eighth placed Nasdaq is also trying to get used to life back at 45 degrees, as Skipper Rob Graham reports: “The building wind and sea state mean we are all getting a taste of the bumps. Everyday life has become difficult again as even the simplest tasks seem to take forever.

“But at least we are making better progress southeast towards Fremantle now, having spent a large part of yesterday battling a strong branch of the Agulhas Current that was determined to take us southwest.”

Conditions will continue to test the fleet as Clipper Race Meteorologist Simon Rowell explains: “The strong east-east-southeast winds should back and if anything, increase slightly before the front comes over sometime tonight. Gusts should get into the 50 knots and the further south you are, the marginally stronger these will be. After the front there will be a rapid backing and easing northwest – west-northwest.”