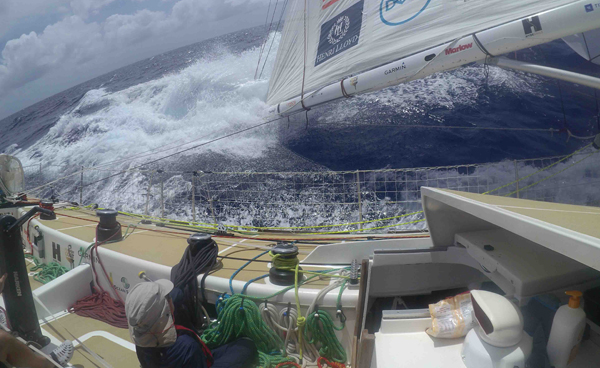 On board GREAT Britain.

The U.K. Marine Accident Investigation Branch (MAIB) has released its report on the man overboard that occurred on the racing yacht CV30 on November 18, 2017.

Simon Speirs fell overboard from the foredeck of the yacht when approximately 1500 nautical miles west of Fremantle, Australia, during the Clipper Round the World Yacht Race. He was initially secured to the yacht, but before he could be recovered his safety tether hook distorted and suddenly released. He was recovered, with no signs of life, from the water by the crew and could not be resuscitated.

At the time of the accident the skipper was on the helm and was sailing CV30 downwind in very rough seas. Five crew, including Speirs, all of whom were secured to the yacht by their tethers, were on the foredeck to haul down and secure the yankee 3 headsail. When the sail was three quarters down a large wave on the port quarter caused CV30 to slew to starboard and then to port, leading the yacht to accidentally gybe. The bowman fell overboard but was then able to haul himself back on board. Shortly afterwards, Speirs fell overboard from his position on the starboard side between the forestays.

The skipper tacked CV30 to place Speirs on the high side of the yacht, but he was limited in his ability to slow the yacht due to damage sustained during the accidental gybe. The bowman was unable to reach Speirs, who was being dragged along in the water and buffeted against the yacht’s starboard side. A halyard was passed to him, but as he struggled to secure it to his lifejacket his tether hook distorted and released.

The yacht’s crew immediately initiated the man overboard recovery procedure. In the prevailing wind and sea conditions, and without full control of the sails, the skipper managed to maneuver CV30 alongside Speirs, who appeared to be unconscious, 32 minutes later, but following his recovery he was unable to be resuscitated.

The MAIB investigation concluded that the combined effect of Speirs’ tether length and the hooking point location resulted in him being dragged alongside the yacht, preventing his recovery. It also concluded that his tether hook became caught under the starboard forward mooring cleat, resulting in the hook being loaded laterally, distorting and releasing.

On January 9, 2018, the MAIB issued Safety Bulletin 1/2018 regarding the dangers of lateral loading of tether hooks, and recommended that the method used to anchor the end of the tether to the yacht should be arranged to ensure that the tether hook cannot become entangled with deck fittings or other equipment. Further recommendations are made in respect of reviewing and amending international standards for tethers and jackstays.

In view of this and previous man overboard accidents, Clipper Ventures plc has been recommended to further review and, as appropriate, modify its risk assessments and standard operating procedures with particular regard to foredeck operations, reducing sail in rough weather and methods for recovery of both tethered and untethered man overboards.

Clipper Ventures plc has also been recommended to review and amend Clipper 70 yacht maintenance and repair processes to prevent potential additional workload falling on crew, contributing to fatigue and affecting their performance.

The report is available here.