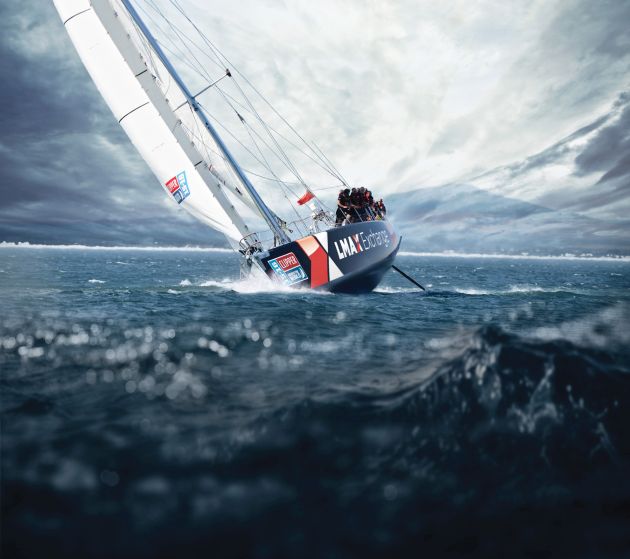 The eleventh race of the 14 stage Clipper 2015-16 Round the World Yacht Race, The LMAX Exchange – RACE of THE AMERICAS from Panama to New York, got underway at 1208 UTC (0708 local time) on Tuesday 31 May with a Le Mans start in the Caribbean Sea.

At 1930 nautical miles from Panama to New York, Race 11 will see the teams negotiate their way through the Caribbean Islands, beating upwind before potentially hitting some light winds before hopefully ending with a kite run on the approach to ‘the city that never sleeps’.

Having passed through the Panama Cana in rafts of three, all twelve teams were reunited on the eastern side of the canal late on 29 May before beginning their motor from Shelter Bay to conduct the Le Mans start led by the appointed Lead Skipper Rich Gould on IchorCoal.

This is the fourth time the fleet has conducted a Le Mans start in the circumnavigation and after delaying the start overnight because of light winds, Skipper Rich informed the Race Committee that the race got underway without any further incident.

“The fleet is back racing after continuing under motor north during the night due to a lack of breeze which forced a postponement in our start. During our overnight motor-sail the breeze filled and we had several large rain squalls pass over the fleet, but conducting a Le Mans style start in the dark is not an option.

“As soon as the fleet came back together at first light this morning we lined up on course, briefed our crew and got the start sequence under way.  With all the boats holding course and position on the line we were off to a good clean start. Next stop New York City,” Rich added.

Race Director Justin Taylor outlines the route and conditions the teams can expect on their race to New York where they are expected to arrive at Liberty Landing Marina between 12- 14 June, after sailing past the welcoming sight of the Statue of Liberty.

“The wind on the western side of the Caribbean Sea is usually driven by the Trade Winds coming from the east of the Atlantic. By the time they reach the fleet though, they will almost certainly be quite light. So, the first section of the race up to the windward passage to the east of Cuba will be a close reach with the wind forward of the yacht’s beam. The sea should be quite calm with small wavelets which means that those teams that helm the best will reap the rewards. It is all about sailing the absolute best course in order to clear Cuba on one tack.”

In a race that is essentially divided into three sections in terms of tactics and conditions, Justin goes on to describe the next two phases.

“After that, the fleet picks its way through the northern Caribbean Islands and the Bahamas which can be characterised by fluky winds accompanied by spectacular displays of lightening. The third section of the race will be greatly influenced by the south-westerly corner of the Atlantic High with its clockwise circling winds. This will bring the wind onto the starboard quarter of the yachts and we should see some fast kite runs into New York.”

While French Skipper Olivier Cardin and his LMAX Exchange crew have stormed their way to the top of the leaderboard, winning five of the ten races so far, first time Team Sponsor LMAX Exchange has marked its arrival in the Clipper Race with a bang with CEO David Mercer even joining his crew on board for the iconic Sydney-Hobart Race.

With the LMAX Exchange – RACE of THE AMERICAS finishing in one of the world’s premier financial cities it was the perfect fit for the UK’s fastest growing technology firm and the leading innovator in foreign exchange trading to sponsor this race.

David Mercer says: “The US is a new and exciting frontier for LMAX Exchange and we look forward to welcoming all the crew, supporters and wider Clipper Race family in June. New York will be a temporary but worthy ‘home of the brave’ for our courageous sailors as they near the end of their circumnavigation.”

Bonus points will once again be on offer with the Scoring Gate set to the western side of the course in order to give the teams a dilemma: take the shortest route to New York and aim for a podium place, or go for the extra points?

The Race 11 Scoring Gate is 5 miles wide, situated at 24° 07 north, between the lines of longitude 74° 15 west and 74° 10 west. The first three teams through the gate will receive three, two and one point respectively.

A further two bonus points will also be awarded to the fastest team through the Ocean Sprint between the lines of longitude 30°N and 32°N.

After the tenth of fourteen races in the global series LMAX Exchange has an eleven point lead at the top of the Overall Race Standings. Derry~Londonderry~Doire is in second, with GREAT Britain eight points back in third place. The full table is available to see below the map on the Race Viewer page where the progress of the fleet can also be tracked.

Race 10, the PSP Logistics Panama Cup, from Seattle to Panama, was won by LMAX Exchange with ClipperTelemed+ and Unicef taking the remaining podium places.

With a client base in over 90 countries, LMAX Exchange is at the forefront of the FX industry’s transition to exchange style, ultra-low latency trading. The ‘Americas’ feature strongly as part of its global business expansion strategy – especially so with the impending milestone of launching a new matching engine for the US in New York before the end of 2016.