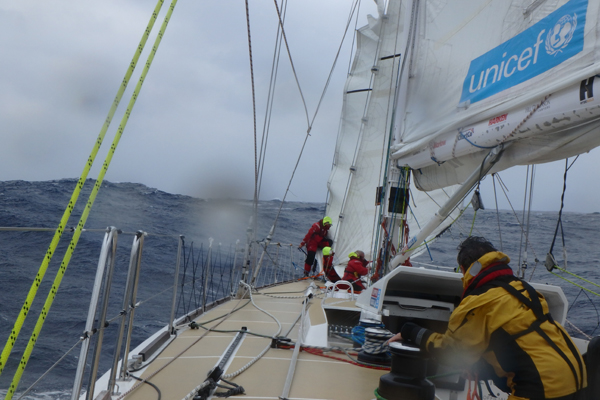 The teams have been contending with light, fluky winds and squally rain clouds during the Ocean Sprint, but have had a boost from the strong Kuro Shio current.

Garmin is still leading the fleet in The Sailing City • Qingdao Cup to China, but its lead has decreased to 12.68 nautical miles. Now second-placed Derry~Londonderry~Doire is chasing hard and aiming to record a faster Ocean Sprint time, having made impressive progress over the last 12 hours.

LMAX Exchange, which has dropped a place into third, is 49.36 nM behind the leader. GREAT Britain, now in fourth, is 74.41 nM behind Garmin having suffered a frustrating time stuck in a wind hole with LMAX Exchange sailing off despite being close by.

The lighter winds have allowed some teams to fly a spinnaker for the first time this race, but the wind should veer back round again in the next couple of days.

Paul Atwood, Skipper of Unicef, in twelfth, described the conditions his team had experienced over the last day.

“We thought we would be able to sail through the gap between Lanyu and Xiaolanyu Islands, into the forecast stronger current east of the islands, before turning north for the start of our Ocean Sprint. A huge rain cloud, horizon to horizon, uniform grey and leaking copious amounts of water soon put pay to that idea.

“No sooner had we crossed 22.00.00N the wind died completely – what is it with this race? However, it reappeared but only allowing either a north or south-easterly course, so north it is. We still have a good northerly current and hope to hook into more veering winds to lift us up along the coast of Taiwan. Time will tell,” Paul added.

“We rounded Taiwan and had a very fortunate wind shift to take us between the island and a smaller outlying island to the east. The local Kuro Shio current – which runs up the coast of Taiwan and then off to Japan – was also smiling on us and gave us a little push in the right direction. So we began our Ocean Sprint at 1518 UTC, so we will see how much of an amble this becomes with the deteriorating winds!

“As we have been able to bear away from the wind slightly we have shaken out our reef and now boast a full mainsail, there isn’t many times I have been able to say that since we left Vietnam. Next task for the on watch will be the big headsail. That has been out once since Vietnam but not for long,” Greg added.

Simon Rowell, the Clipper Race Meteorologist, said forecasts show a front up at the north end of the Yellow Sea, and that should start to pass over the fleet in the next 24 hours, but it shouldn’t be strong.

He added: “For the teams still in Kuro Shio, there will be a deterioration in the sea state. After that the weather goes light for around 36 hours, and should veer back again. But then, a new low should develop quite quickly over the Chinese coast just south of Shanghai, and as this tracks towards Japan will deepen and leave quite strong northerlies behind it,” he added.

Who will record the fastest Ocean Sprint time? Will Garmin hold onto its lead?